MLB PLAYOFFS: History tells us the red-hot Nats should pump the brakes on winning the NL pennant too soon 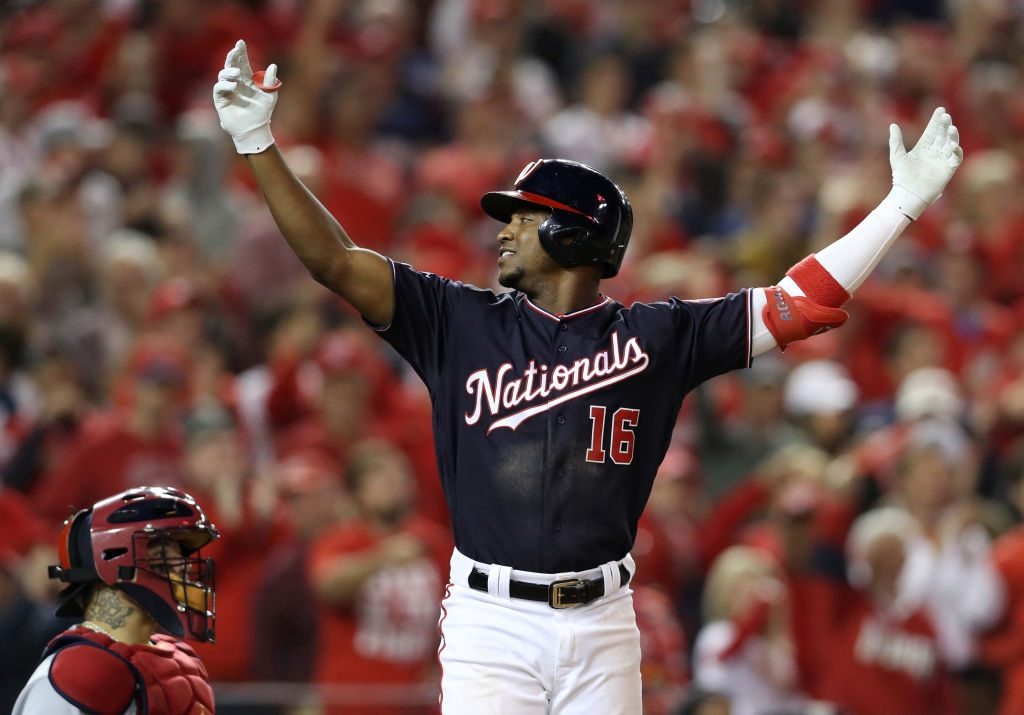 The good people of the Washington D.C. area, along with the Canadian province of Quebec, have been waiting a loooooong time for the Nationals (formerly the Montreal Expos) to reach the World Series.

So, you’ll understand if Nationals/nostalgic Expos fans are anxious to sweep the anemic Cardinals (just two total runs in three games) in Game 4 of the National League Championship Series … and earn some extra time celebrating the first baseball pennant in Washington D.C. since 1933.

(The Texans Rangers and Minnesota Twins franchises both started out in Washington many years ago, before relocating to their current regions.)

Well, at the risk of being a major killjoy, I come bearing a simple message for the Nationals faithful:

Tank Game 4 … and if at all possible, put in minimal effort for Game 5, as well.

Here’s our historical-based reasoning for such a preposterous notion, dating back 20 years of Championship Series/World Series results:

FACT #1
Since 1999, the pennant-capturing clubs with three or fewer days between the start of the World Series are 9-5 during the Fall Classic (read: nine championships).

FACT #2
Charting the last 20 playoff races for the American and National leagues, the first team to clinch either pennant posted an 8-12 overall record for the World Series.

FACT #3
The numbers are even worse with recent history: Since 2006, the first team to capture a league pennant has an awful track record of 2-11 in the World Series.

FACT #5
Since 1999, the pennant victors with six or more rest days before the World Series went 4-7 in the championship round.

FACT #6
And of the eight teams to garner six-plus days of rest before the World Series since 2006, only one claimed the world championship (2008 Phillies).

Which brings us to this:

If the Nationals end up sweeping the Cardinals tonight, it’ll mean a seven-day break for Washington — weather permitting. (Game 1 of the World Series, either in Houston or New York, launches next Tuesday night.)

And as our 20-year study would attest, with seven days of rest, the Nationals would merely have a 25-percent chance of upsetting the Astros or Yankees in the World Series (1-3 overall).

On the flip side … there’s one bit of historical precedent for the Nationals keeping the Cardinals pinned to the ground until the final out of Victory #4:

In 2004, the Yankees squandered a 3-0 series lead to the Red Sox in the American League Championship Series, a once-in-a-lifetime meltdown that directly/indirectly paved the way for Boston collecting four world titles over 14 seasons.

And as an unintended consequence, all writers are now legally obligated to mention the Red Sox’ improbable comeback of 2004 … as a warning shot to those who dare make ultra-quick work of overmatched teams in Championship Series play.

PrevPreviousLIONS-PACKERS REDUX: The officials were bad … but it’s time to get rid of the real NFL evil — Instant Replay
NextALLEN IVERSON: 7 air-tight reasons why ‘The Answer’s Big 50 countdown snub has no meritNext