MLB: It’s hard to fathom the Houston Astros’ hubris, stupidity, in the wake of cheating scandal 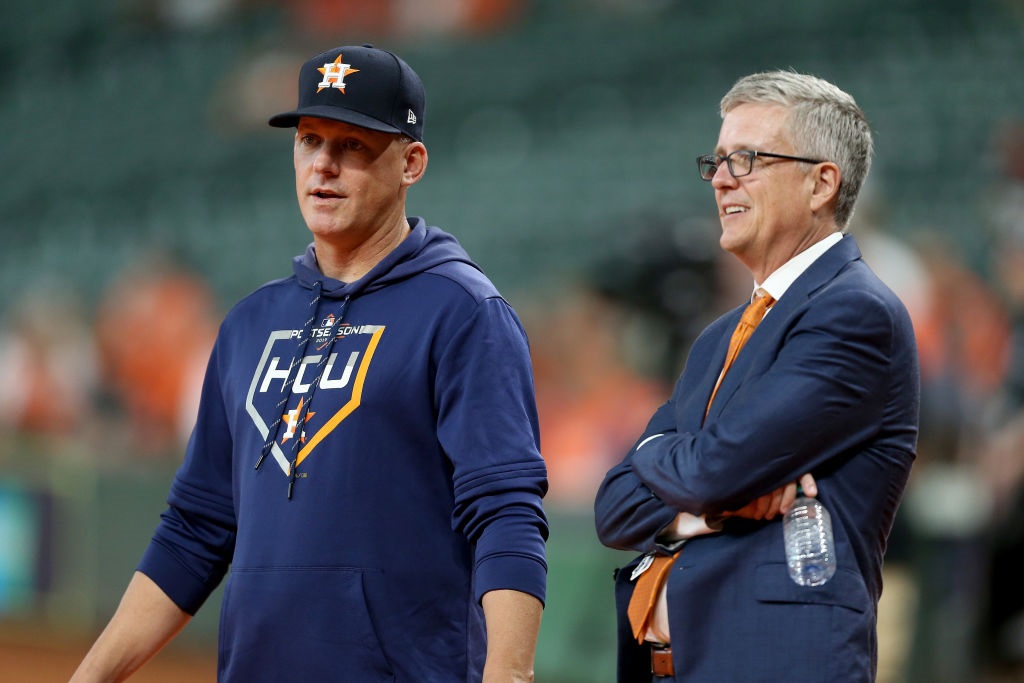 Let’s open this column with a super-serious question, even if it comes with a sarcastic tone:

In this perpetual-motion age of free agency and annual roster overhauls, did certain club officials genuinely believe they’d get away with semi-obvious forms of cheating during these two seasons, through the not-so-stealth execution of signaling incoming pitches … with loud, audible whistles and/or perfectly timed sonic-boom noises, courtesy of dugout-based trash cans?

It’s the craziest thing I’ve ever heard. And yet, this D-grade-level of subterfuge has apparently become the franchise’s downfall, in the wake of Major League Baseball’s landmark decision to suspend team skipper A.J. Hinch and general manager Jeff Lunhow for the 2020 season, and strip the club of first- and second-round picks for the next two drafts (2020/21).

Throw in a $5 million fine to the franchise, and Astros owner Jim Crane’s subsequent firing of Hinch and Lunhow, and we’re talking about a scandalous story, with horrendous consequences, that draws (un)favorable comparisons to the 1919 Chicago White Sox — the most notorious team in baseball history, roughly coinciding with the sport’s original business boom in the early 1900s.

Does that seem a little harsh … tipping incoming pitches to the Astros hitters, just milliseconds before the delivery?

I might have shared this sentiment back in October, around the same time Houston was vying for its second World Series championship in three years.

However, thanks to YouTube, my thoughts quickly switched from mild skepticism to outright disgust with the Astros franchise, which had evolved into one of baseball’s great feel-good stories of the 2010s decade.

Check out these videos chronicling the Astros’ subterfuge during the 2017 campaign (below), the same time when current Red Sox manager Alex Cora served as Houston’s bench coach.

If we’re to believe the Monday finger-pointing from various club officials (fired or still-employed), Cora and the Astros players were more complicit in the pitch-tipping scheme, perhaps more than the now-deposed Hinch and Lunhow.

Regardless of who initially hatched this terribly short-sighted plan, you’ll be the Astros’ hubris for thinking this system would never be detected or decoded — even though former Houston pitcher Mike Fiers was the first active player to reveal the club’s spying exploits through the media.

For the average baseball fan or even sports layperson, it would seem almost impossible to decode/communicate pitches in real time — without the help of a runner on second base.

We’re talking about a time span of maybe 2.5 seconds, between the pitcher adhering to the catcher’s pitch preference … and then offering the delivery to home plate.

And yet, the Astros seemingly had everything nailed for home games, implementing a two-step, high-speed process for their apparent misdeeds:

STEP 1 — Construct a special, high-definition camera in the outfield, one that could effectively read the catcher’s numbered signs.

STEP 2 — The gameday staffers, through the usage of HD monitors in the dugout area, would interpret the catcher signs and then communicate the type of pitch, via the sound of trash cans striking the ground from a distance.

**For zero bangs before the pitch … incoming fastball.

**For one bang before the pitch … incoming changeup.

**For two bangs before the pitch … incoming curveball or slider.

(NOTE: There were also allegations of a ‘whistle’ system that might have been used during the 2017 World Series.)

On the surface, the whole process still relies on expert-level guesswork from the hitter, in terms of anticipating precise pitch location and the ball’s spin rate.

But one could easily cite the converse of such an argument, as in … You’re far less likely to chase bad pitches, when generally knowing what’s on the way.

And that, by any measure, should be viewed as a major competitive-play violation on the Astros’ part. It’s a damning charge, and one which could adversely affect the franchise for another 10-15 years.

TO VACATE OR NOT? THAT IS THE QUESTION

From 2011-13, the Astros became the first MLB franchise of the modern era to incur three straight 100-loss campaigns, essentially going into ‘tank’ mode during that time, as a means of reducing payroll, stockpiling high draft picks and constructing a young, dynamic core of ‘controllable’ players down the road.

The happy result: After recording 86 and 84 victories in 2015/16, the Astros fulfilled one of Sports Illustrated‘s greatest prophecies (above) … by winning the World Series in 2017, outlasting the Los Angeles Dodgers in seven stupendous games.

The next two seasons would yield 103 and 107 wins, with the latter Astros team advancing to the World Series … only to fall to the Washington Nationals, by way of another thrilling seven-game series.

By all accounts, just a few months ago, the Astros were nicely positioned for a few more years of American League West titles, AL pennants and World Series contention.

But now, how will the franchise move past Monday’s dark announcement, knowing the 2017-18 Astros shall remain synonymous with loathsome, yet credible cheating allegations.

a) Should Houston be allowed to keep its world championship from 2017? Why didn’t any players end up collecting suspensions?

b) Did Alex Cora take his supposedly proprietary tipping-pitches system to Boston, as manager of the 2018 squad that amassed 108 regular-season victories and cruised to the World Series title (versus the Dodgers)?

c) Should MLB offer up a public apology to the Dodgers, since they were the World Series victims of the 2017 Astros and 2018 Red Sox?

Or what about the New York Yankees, who went 3-0 at home and 0-4 on the road versus Houston in the 2017 AL Championship Series?

After all, skipper Joe Girardi lost his job for not getting the Yankees over the proverbial hump against the Astros.

The Part C questions bears the look of a long shot, since MLB likely wants to close the book on this scandal in relatively short order.

The Part B question seems eminently likely, since Cora had even more to gain, legacy-wise, as Boston’s skipper, compared to being Houston’s bench coach.

The Part A question reads a tad exuberant, since these practices seemingly had no bearing on the Astros pitchers … or whenever the Houston offense played on the road.

But then again, in college football and basketball, if major violations are committed during a championship season, the notion of ‘vacating’ that title has imminent plausibility.

(Exhibit A: Louisville’s 2013 basketball team eventually had to forfeit its national championship, thanks to significant violations allegedly occurring on coach Rick Pitino’s watch.)

At the very least, the Astros’ amazing success of one title, two American League pennants and three straight 100-win seasons has a substantial taint … a proverbial stink that could only be alleviated by another championship run in 2020.

And without Lunhow, who on Monday had the unmitigated gall to blame the Astros’ tip-pitching system on some “low-level employees” … even though all these shenanigans occurred on the general manager’s watch.

(NOTE: With his media statement, Hinch was defiant, but certainly more contrite than Lunhow, regarding the franchise’s failure to curb the tip-pitching system.)

Simply put, as the team’s general manager, Lunhow was either too stupid, too ignorant or outright lying about his full grasp of the cheating scandal; and whichever answer proves more correct over time … no response should garner any sympathy from Baseball Nation.

General managers are paid a lot of money, and granted tremendous powers within a franchise, to root out all potential evils with their club.

They’re not paid to look the other way … in the face of wildly deceptive cheating measures.