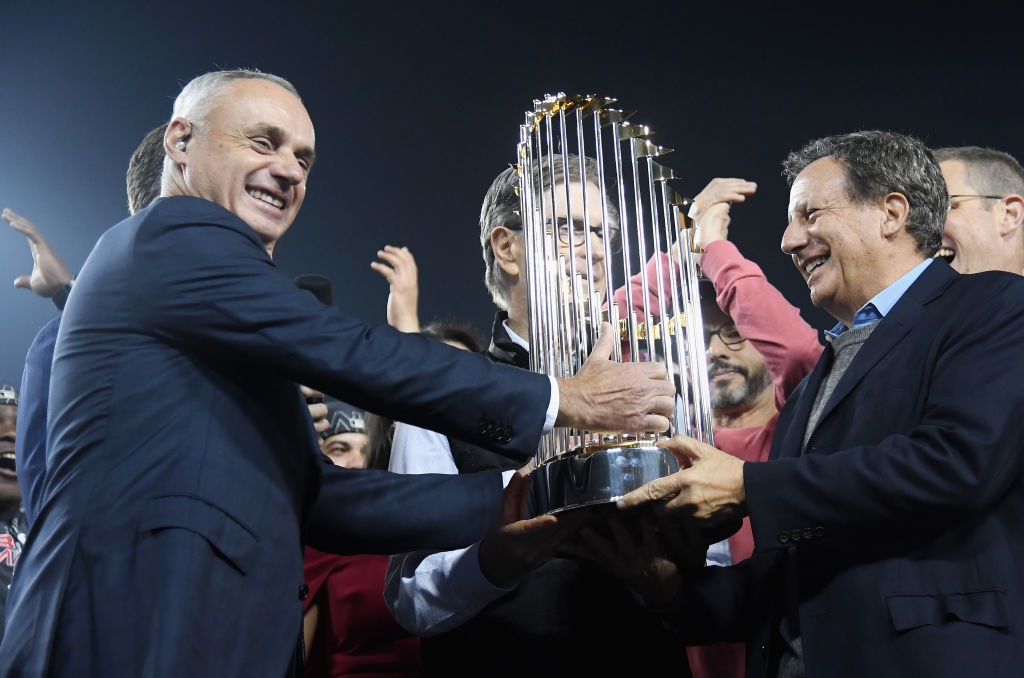 On Monday night, Joel Sherman of the New York Post dropped a bombshell onto the sporting world, revealing Major League Baseball’s ambitious proposal for drastically altering the postseason system in October, as early as the 2022 season.

As expected, the initial response from Baseball Nation wasn’t favorable, to be kind.

On Twitter, MLB Commissioner Rob Manfred was trending nationally for all the wrong reasons, with a number of Tweets mocking his future viability as the man in charge.

There were even public pleas for former commissioner Bud Selig putting a stop to this yet-to-be-approved plan, even though Mr. Selig retired from his power a number of years ago.

Some MLB players also expressed their displeasure with the proposal, with Reds pitcher Trevor Bauer displaying the most candor on Twitter.

All in all, it was an awkward night for Major League Baseball’s Q-rating, especially only two days away from Spring Training camps opening in Florida and Arizona.

On the positive front …

When calmly addressing the proposal point by point, through a combination of critical thinking and objective reasoning, one thing stands out from the plan’s entire rollout:

Major League Baseball has zero interest in maintaining the status quo with its playoff system, as the league inches closer to a new round of rights-holder talks with the major TV networks. The powers-that-be want more intrigue, more inventory (read: product) … and presumably new sources of untapped revenue.

Beginning in 2022 … assuming the proposal secures the blessing of the Major League Baseball Players Association:

a) Seven teams apiece from the American and National leagues would qualify for the playoffs.

b) The per-league structure would include three division winners … and four wild cards with the next-best records.

c) The No. 1 seed in each league would get an automatic bye to the League Division Series round.

d) On “Selection Sunday,” the 2- and 3-seeds would pick their first-round opponents from the wild card clubs.

e) Subsequently, the wild card with the best record, or 4-seed, would be left with the final leftover for Round 1.

f) Each Round 1 series would entail a best-of-3 setup, with the 2-3-4 seeds hosting every game.

g) For the League Divisional Series round (best-of-5), the 1-seed would face the lowest remaining seed.

h) The other LDS matchup in each league would feature the surviving two clubs from Round 1.

i) The League Championship Series would have a best-of-7 setup, similar to previous years.

j) The World Series would maintain the traditional best-of-7 setup, just like the last 80-plus years.

WHAT TO LOVE ABOUT MLB’S RADICAL PROPOSAL

For what it’s worth, I have no problem with baseball’s current format of one-and-done wild card outings.

a) It’s a good motivational carrot for every non-division winner, vying for a bite of the October apple.

b) It significantly enhances the late-innings anxiety among the participating teams (look no further than last year’s thrilling Wild Card finish).

However, I also acknowledge that baseball must keep up with the changing times; and if adding more playoff teams to the mix, while putting a unique spin for Who Plays Who for Round 1 appeases the public at large … then I’m for all the experiment.

Of greater importance, I fully support Major League Baseball’s efforts to reduce the number of teams tanking during a given season.

By proxy, the number of clubs competing for postseason glory would go up significantly; and as such, this would likely embolden more general managers to execute deals around Trade Deadline time (traditionally late July).

In the eyes of risk-averse GMs, it sometimes doesn’t make sense to pursue a one-and-done playoff format, at the expense of gutting their franchise’s supply of blue-chip prospects.

However, if you were guaranteed at least one of best-of-3 series in the opening round (as a playoff participant), knowing that more teams reach the postseason … then the almighty chase might justify the means.

REASON #2 — The pennant races would be double-sided, in terms of satisfying the wild cards and pursuit of the No. 1 seed for each league

Check out the above Tweet, with the researched provided by esteemed baseball writer Tom Verducci (Sports Illustrated, FOX Sports). When applying the expanded playoff proposal to the already-completed 2012-19 seasons:

****On the arbitrary date of September 10 for each year, an average of 20 clubs would have been within five games of a postseason berth.

****Twelve different franchises would have claimed the No. 1 seed over the course of the eight seasons.

****Citing all eight years, the Dodgers and Cardinals would have qualified for the National League playoffs each time.

One more thing: Under the expanded playoff proposal, according to Verducci, the maximum number of potential postseason outings would improve from 43 to 59 games.

And the maximum number of elimination games, within the expanded playoff format, might improve from 26 to 36 outings.

REASON #3 — TV networks will surely flock to this proposed system, like the Salmon of Capistrano

FOX Sports shall remain the home of the World Series through 2028; but the other broadcasting carriers for the preceding rounds will likely be subject to an open-bidding process in the next year or two.

And for the players’ union, it would surely mean a sizable bump in league revenues.

In other words, it seems like a win-win for all parties … minus the exhausted playoff teams that would suddenly need 13 postseason victories to capture a World Series ring.

Let’s say the 2022 campaign ends on Sunday, Oct. 2, and there are no tiebreaker games slated for the following Monday.

On that Sunday night, after the regular-season finales have been completed, MLB Network or another TV giant would broadcast a Selection Show for Round 1 of the playoffs, with the 2 and 3 seeds from the American and National leagues choosing their respective opponents.

(As explained above, the 4-seed would then draw the group’s final wild-card leftover for the opening round.)

Now for the fun/excruciating components:

a) The TV ratings for the Selection Sunday Baseball broadcast would likely be strong, right out of the gate.

b) It would launch a new wave of postseason buzz that baseball hasn’t felt in 20-25 years. (The wild card round began in 1995.)

c) The 2-seed for each league would run the risk of angering their opponent in Round 1, through the perception, whether fair or not, of selecting the weakest teams of the playoff field.

d) The managers and players from the 2-seeds would likely feel more pressure than a normal postseason experience, given the raised expectations of Round 1 success.

REASON #5 — No travel-day gaps during Round 1 action

The proposed postseason format doesn’t allow for many open dates, or rainouts.

In that vein, give MLB full credit for demanding the higher seed host every game of each opening-round series.

Another plus: Within this system, the bye period for the No. 1 seeds wouldn’t last longer than four or five days, weather permitting.

How did it turn out?

As luck would have it, all four divisions produced separate winners for the split seasons; and those eight teams participated in a three-tiered tournament — starting with the intra-division battles (best-of-5 series), the League Championship Series (best-of-5) and World Series (best-of-7).

The only problem here: Lost in all the hype for baseball’s unique postseason … the Cardinals (NL East) and Reds (NL West) notched the best cumulative records in the National League — but were coldly left out of the postseason picture (no first-place finishes for the split terms).

If only baseball had this Manfred-endorsed system of six or seven postseason clubs per league four decades ago, the Cardinals, Reds and Orioles (American League’s third-best record in 1981) would have had an earnest shot at the World Series.

Lifelong Tigers fans, such as yours truly, have been lost in the proverbial woods over the last four years, enduring Detroit’s predictable demise from 86 victories in 2016 (missing out on the AL wild card during the final week) to 64, 64 and then merely 47 wins in 2019.

Fortunately, Tigers enthusiasts have plenty of experiencing with the dark term of bottoming out, since the club posted ridiculously low averages of 65.2 wins from 1996-2005.

And even better, we know that good times are on the horizon for the Tigers, who currently boast one of Major League Baseball’s best farm systems — highlighted by four players in the most recent listing of Top 50 Prospects (pitchers Casey Mize, Matt Manning, Tarik Skubal and outfielder Riley Greene).

What’s more, thanks to its wretched record from last season (47-114), Detroit will own the No. 1 overall pick in the June draft, and presumably have a clear path to University of Georgia pitcher Emerson Hancock (a potential Mize clone, in the eyes of MLB scouts).

No one expects the Tigers to eclipse 70 wins this season; but the projections are a lot rosier for 2021, when the majority of top prospects likely garner a full-time call to the big leagues.

In other words, if Major League Baseball adopts this ambitious, but eminently fun proposal in time for the 2022 playoffs … the Tigers — with their super-sized core of high-upside, cost-controlled assets — could legitimately experience a run of 10 straight years of postseason contention.