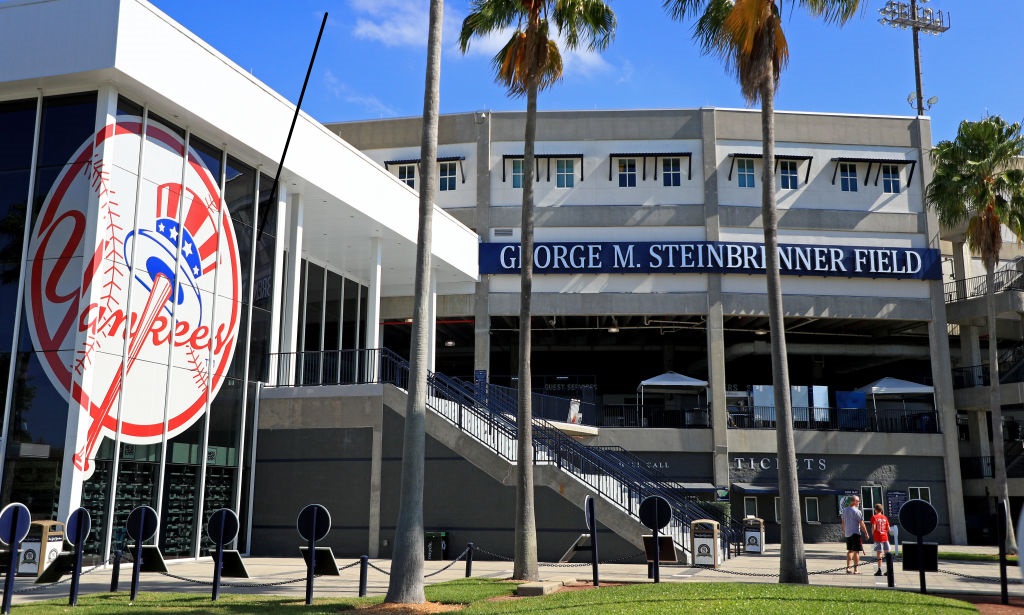 Last week, esteemed baseball writer Bob Nightengale dropped a major scoop on the sports world, revealing the principal measures of Major League Baseball’s unofficial proposal for conducting the 2020 season … while also minimizing air travel as much as possible (due to the Coronavirus outbreak).

Here are the highlights of Nightengale’s fascinating report, which curiously has garnered little mention from other national baseball pundits on Twitter:

**Each club’s Spring Training headquarters (15 in Florida/15 in Arizona) would serve as the base camps — and home stadiums — for the entire regular season. In other words, the traditional National and American leagues wouldn’t exist for this season. Everything revolves around the Spring Training epicenters.

**There would be no ticket-buying fans in the stands for any regular-season game. Essential personnel for each gameday event would likely be limited to players, coaches, scouts, agents, front office staff and working media.

At this point, it’s unknown if any food/drink vendors would regularly be on site.

**TV network and online companies would still be tasked with broadcasting the games. In fact, this could be the most significant TV campaign in baseball history … given the plausible expectation of record viewership.

(No word on whether the standard blackout rules would apply for the ‘MLB Extra Innings’ package for TV/online consumption.)

**Unlike the desert-centric ‘Arizona Plan’ from last month, where all 30 MLB teams would conduct the regular season at Cactus League ballparks, the Florida-Arizona model enables the league to have daily access to 26 different stadiums — including three major-league venues (Chase Field in Phoenix, Tropicana Field in St. Petersburg, Marlins Stadium in Miami) for postseason play.

(No word on how many teams from each league would qualify for the playoffs in 2020.)

**Every 2020 game would implement the Designated Hitter rule for lineup creation.

**The Grapefruit and Cactus champions would meet in the World Series, with the major-league stadiums in Florida and Arizona presumably serving as the venues for Fall Classic outings.

**The rosters would be expanded for each team throughout the regular season; and things might super-sized for every club … if there’s no minor league baseball in 2020.

**This radical realignment would maintain the six-division setup of previous seasons, but it would also be a dramatic departure from what baseball fans have known for the last 50 years.

Check it out (below the ad):

a) Under this hypothetical arrangement, the high-powered Yankees would be sizable Grapefruit favorites to capture the North title.

Factoring in a 101-game schedule (more on this later), neither the Phillies, Blue Jays, Tigers or Pirates would be strong candidates for a .600 winning percentage.

b) On the plus side, it’d be great to see Philadelphia and Pittsburgh temporarily residing in the same division (similar to the colorful 1970s and 80s), even though neither team would cross Pennsylvania state lines during the season.

c) Well, so much for the Braves fully escaping baseball’s toughest division for the 2020 campaign.

Instead of slugging it out with the Nationals, Mets, Phillies and Marlins (National League East), they would be subjected to a Grapefruit gauntlet of two pennant contenders (Twins, Rays) and the Red Sox — a club that’s only two years removed from 108 wins and a world championship.

d) The Grapefruit East has a similarly strong base, featuring last year’s World Series combatants (Nationals, Astros), the Mets, Cardinals and a Marlins club that’s slowly moving away from its pushover past.

Which begs the question: Does baseball really want the Nationals and Astros in the same division, even with the geographical convenience?

Both juggernauts have the potential to play at a .700 clip; and yet, only one might enjoy home-field advantage during the playoffs.

Of course, in a year without the Red Sox and Yankees seemingly locking horns every other weekend (different divisions), maybe Astros vs. Nationals could become a one-year version of that heated rivalry.

After all, if you remember way back in February, the Astros stole much of the Nationals’ Spring Training post-championship thunder with the media, thanks to the abhorrent cheating scandal from 2017; and the Washington players might welcome the concept of facing Houston eight, 10 or 12 times this season.

Let’s be blunt here: Should geographical location really matter with the Cactus League setup, since all 15 teams roundaboutly reside in metro Phoenix?

****Yes, we get that it would be super-convenient for all three Scottsdale clubs (Giants, Rockies, Diamondbacks) to remain in the same division, as an extension of the National League West.

****And yes, on paper, it makes complete sense for the suburb cities with multiple teams (Mesa, for example) to boast teams in a singular division.

But does either rationale trump this league’s potential for wildly imbalanced divisional races?

Look at the Northwest: As currently constituted, neither the Rangers, Padres, Royals or Mariners would be locks for an above-.500 record; and even then, the Brewers wouldn’t be expected to run away with the crown.

And what about the West grouping? With the possible exception of the Angels, the other four clubs would be solid bets to reach the World Series … if/when they can escape the drudgery of a completely stacked division alignment.

Given the close proximity of every Cactus franchise, MLB’s logistical arm might fare better with two alternative options, when it comes to this one-time realignment:

a) Arrange the composition of each division with a randomized live drawing — a cool stunt which would surely generate boffo TV ratings for MLB Network.

b) Rely on a few predictive models (compilation-wise) to rank each Cactus team 1 through 15 … and then use the S-curve for determining the divisional fate of each club.

HOW WOULD INTERLEAGUE PLAY WORK?

The Grapefruit/Cactus model would certainly eliminate air travel for all intra-league games, but here’s the rub:

Given the odd number of teams stationed in Florida and Arizona, MLB would still be obliged to have at least two Interleague series per week — one for the Monday-Thursday window … and one for Friday through Sunday.

In other words, teams would have to fly to the opposing state for road Interleague encounters. It would be an unavoidable consequence of the Grapefruit/Cactus model.

Is this a bad thing? No. It’s merely another logistical challenge for the experts creating MLB’s ever-evolving master schedule.

Let’s throw out the hypothetical dates for Spring Training: May 15 to the first week of June.

For this three-week period, each club would have four full days of intrasquad workouts (May 15-18), allowing the players and coaches to assimilate back into their respective environments

Consequently, the Spring Training outings for the Grapefruit and Cactus leagues (single-squad/split-squad) would run from May 19-June 3; and since the majority of 2020 minor leaguers have already been optioned to farm camps, this 14-day window would enable starting rotations to quickly get up to speed with MLB talent, in terms of building up arm strength for innings endurance.

PrevPreviousFANTASY BASEBALL: Top 30 shortstops for the 2020 campaign … whenever that might be
NextFANTASY FOOTBALL: A post-free agency look at the NFL’s top 75 PPR playmakersNext