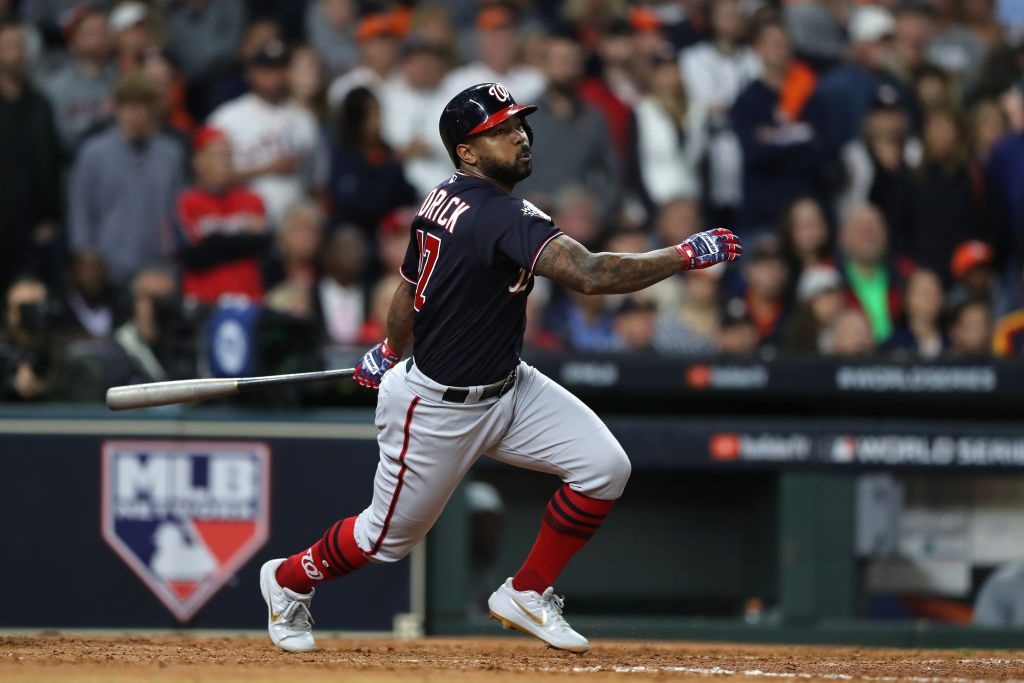 Baseball truly is a fascinating game of first-time experiences.

How else to explain the World Series being a high-profile, make-or-break spectacle for 116 years; and yet, until Wednesday night, no Fall Classic had ever featured the road team claiming victory at every turn?

From a Wikipedia perspective, this might be the long-lasting takeaway from the 2019 World Series:

The Washington Nationals, who were nearly tendered their last rites in the National League Wild Card Game 29 days ago (trailing 3-1 in the 8th inning to Milwaukee, before rallying for victory), deftly and defiantly pulled out road wins for Games 1, 2, 6 and 7 in Houston, en route to capturing the first world championship in franchise history.

(For those scoring at home, the Montreal Expos/Washington Nationals have been existence for 50 years, or 51 seasons.)

The AL champion Astros also helped this World Series achieve history, dominating the Nats for Games 3, 4 and 5 in Washington D.C., while cruising to a three-game aggregate run count of 19-3.

Given the Astros’ World Series title of two years ago, amid many highs and lows against the Dodgers, you’d think Houston would have used that weekend momentum in D.C. as fuel for closing out another championship before the Minute Maid Park faithful.

**In Game 6, the Nationals rallied from a sluggish start (and controversial Instant Replay determination) to collect the 7-2 victory, thus forcing a winner-take-all scenario for Wednesday.

**And for Game 7, a night in which Greinke surrendered just one hit in the first six innings, while protecting a 2-0 lead, the Nationals exploded for six runs in the final three frames … and ended up sealing the crown, with minimal resistance from the Astros’ suddenly dormant bats.

Which brings us to this: How did the Astros strand 10 runners in the first five innings, and then get mowed down 12 straight the rest of the way?

After all, starting pitcher Max Scherzer (two runs, seven hits allowed) routinely clocked his fastball in the mid-90s on Wednesday; and the Eye Test from TV tells us many of these deliveries had above-average movement.

This held especially true during the third inning.

But alas, Scherzer’s pitch had just enough extra oomph, topspin-wise, to result in a deep Alavarez flyout, momentarily breathing life back into the Nationals’ hopes of a late rally.

A COMEBACK FOR ALL TIME

A few minutes later, though, Anthony Rendon reversed the mojo with a solo-blast moon shot to left field, cutting the Nationals’ deficit to one.

A Juan Soto walk prompted a pitching change from Astros manager A.J. Hinch, swapping out the dominant and fleet-footed Greinke (four assists for the night) for reliever Will Harris.

Harris’s cold reality: Kendrick whistled an 0-1 pitch down the right-field line … with the seeing-eye ball caroming off the foul/fair pole.

In a flash, the once-shaky Nationals suddenly had control of Game 7 (3-2 lead).

An inning later, the 21-year-old Soto added to his ever-expanding legend by crunching an RBI single to right field, scoring Eaton (who had previously stolen second base).

And for the coup de grace sequence, Washington erased all doubts about its championship push in the 9th, thanks to key singles from Ryan Zimmerman, Victor Robles and the aforementioned Eaton, whose two-run single up the gut served as the champagne-tapping blow.

In a nice bit of useless trivia, Stephen Strasburg won World Series MVP honors, without ever taking the mound in the decisive Game 7.

The same absence applies to Astros ace Gerrit Cole, the Game 5 hero and prospective mega-free agent (north of $35 million per year???) … who never got a chance to keep Houston within striking distance on Wednesday night.

Would Cole’s mound presence, as a reliever, have been a difference-maker for Game 7?

But hey, it would have been another new thing to celebrate about baseball — Cole’s first (and perhaps last) relief stint in a Houston uniform.

PrevPreviousCFB PLAYOFF: Projecting the top 8 teams, in advance of the inaugural Nov. 5 rankings
NextFANTASY FOOTBALL: 5 Fun Facts to celebrate in advance of NFL Week 9Next