COLLEGE BASKETBALL: Sam Mitchell could be a plug-and-play coaching option for major schools next year 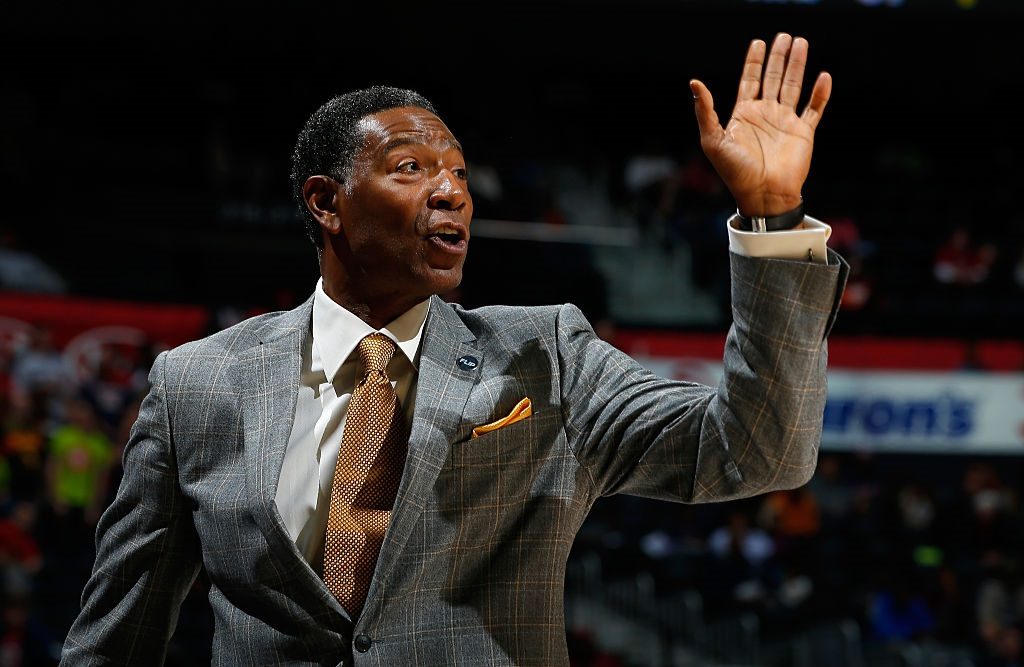 It’s rare to tune into NBA TV for 30-40 consecutive minutes during this preseason without seeing Steve Smith, Sam Mitchell or Hall of Famer Isiah Thomas on the airwaves, in various combinations.

Factoring in the preview shows for all 30 clubs, along with “NBA Game Time,” the network’s signature daily wrap show, the popular, knowledgable and chemistry-popping trio are everywhere this time of year … and that’s a good thing.

Of course, upon viewing Smith’s instructive comments about perimeter play, Thomas’s cool knack for blending old anecdotes with modern-day insight or Mitchell’s special flair for breaking down the mental side of handling/encountering the world’s best players, night-in and night-out, it’s fair to wonder why none of the three analysts are currently coaching at the NBA or elite-college levels?

Smith has been retired from the game for 14 years, which doesn’t seem right, given his youthful appearance. He has never held an official coaching or executive job at the college or pro levels; but it seems like an easy transition to make, factoring in Smith’s quick-strike breakdowns and dutiful work ethic within broadcasting.

Thomas, the first Vice President of Basketball Operations in Toronto Raptors history (1994-95 campaign), has enjoyed three different coaching stops after his playing days, leading the Pacers (2000-03), Knicks (2006-08) with the NBA, and then running the program at Florida International from 2009-12.

Mitchell (13-year career with the Timberwolves and Pacers; first coach in Raptors history to win a division title, circa 2007) has been a relentless and peripatetic figure in the coaching ranks since 2002, either as an assistant (Bucks, T-Wolves, University of Memphis) or head coach (Raptors, Timberwolves, U.S. Virgin Islands team).

For me, Mitchell’s coaching stint with Minnesota particularly stands out:

For the Timberwolves’ training camp in October 2015 (above video), the NBA TV cameras had full access to the Mitchell-run practices; and it was fascinating to see the coach educate old-school veterans (like Kevin Garnett) and young talents (like Karl-Anthony Towns, Andrew Wiggins, Zach LaVine, Ricky Rubio) with similar aplomb, injecting passion, energy and intricate know-how into seemingly routine tasks — such as stealthily hedging over screens at the top of the key.

And the team kept doing this same defensive drill for some time, until they executed it to Mitchell’s liking.

The whole experience, for the interested TV viewer, was akin to attending a clinic featuring Larry Brown — the only head coach in American hoops history to capture an NBA championship and NCAA Tournament title — and happily spending the entire 10 hours on the art of defending the high pick-and-roll.

In other words, details matter … and such perfection often comes with a steep price.

Are you willing to pay it, as a coach or player?

He likely knows every coach, player, scout and recruiting guru connected to the pros and college; and Mitchell certainly has the respect of older players, who presumably revere him for being equal parts folksy and focused.

Patrick Ewing and Juwan Howard are the head coaches at their respective alma maters, Georgetown and Michigan.

Ten years ago, it would have been easy to predict the two big men would remain at the NBA level, chasing their dreams of becoming a head coach.

After all, in most cases, the NBA hours are better, the pay’s higher, the hotels more glamorous, the lifestyle’s more rewarding … and you don’t have to recruit premium talent year-round — minus certain stars during NBA free agency in July.

And yet, Ewing and Howard have gone all-in with the college game, which can be a daunting choice if you don’t have the right support staff.

Mitchell could be the next supposed NBA lifer to put his indelible stamp on a college program with major upside.

For instance, can you imagine the 56-year old teacher/communicator/strategist utilizing his vast network of contacts toward the ultimate goal of building a college juggernaut?

Especially along the East Coast or Midwest markets?

DOES THE BIG TEN BECKON?

At first blush, all three selections come with a whiff of blasphemy:

**Pikiell has quickly developed a reputation for getting the most out of his talent, which often doesn’t compare to the conference’s deeper programs.

On the plus side, though, the Scarlet Knights incurred four Big Ten defeats of five or fewer points last season; and during this transition year, Rutgers forged a three-game winning streak in league play — knocking off Nebraska, Penn State and Indiana.

**Chambers has done a solid job recruiting in the Philadelphia area, which should be the lifeblood of every Penn State coach donning the Blue and White.

Since 2013, Chambers has averaged 17.5 wins per season — headlined by the Nittany Lions’ 26-win campaign in 2017-18 which should have resulted in an NCAA tourney berth.

Instead, PSU channeled that scorned attitude into fuel for an indomitable run to the NIT championship.

**And Collins has the ultimate mic drop on his resume from March 2017, leading the Wildcats to their first-ever berth in the NCAA tournament.

But alas, there are no sure things in the Big Ten, outside of maybe Michigan State coach Tom Izzo controlling his retirement date — whenever that might come.

(Spoiler alert: The Spartans will rank No. 1 for our preseason rankings in a week or so.)

So, for the intrepid athletic directors in the dog-eat-dog Big Ten, everyone else must keep that ever-evolving list of potential candidates — should things change on the fly.

And given his recruiting background, successful track record, instructional expertise and never-ending Rolodex of contacts, perhaps Mitchell’s time will come sooner than later.

If that’s the case, let’s hope Mitchell doesn’t coax Smith and/or Thomas to join him on staff. That hypothetical would leave a major hole with the NBA TV depth chart.

PrevPreviousFANTASY FOOTBALL: 5 Fun Facts to celebrate in advance of NFL Week 7
NextNFL: The ‘You Are Looking Live!’ preview for Week 7Next