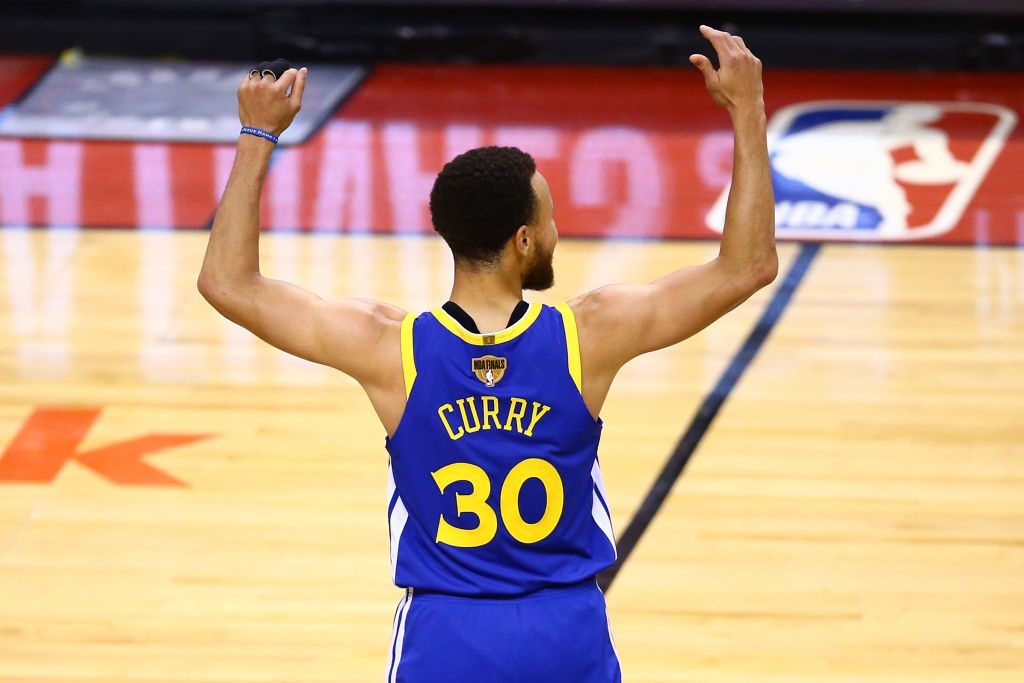 BATSBY Sports cannot wait for Tuesday’s heralded launch of the 2019-20 NBA campaign, which promises to be one of the most talked about regular seasons in league history.

Well, for those who were lying under a rock all summer, with no smartphone access to the Internet, while manually plugging their ears and screaming, the NBA underwent a ton of personnel changes in June/July/August.

And we’ll address nearly all of ’em … as part of our ’25 Things We Looooooove About The NBA Right Now.’

We love how the NBA has maintained its long-standing tradition of having the defending champions raise the banner on Opening Night — despite the Raptors’ crucial loss of Kawhi Leonard to free agency.

Last October, the good people/rabid fans of Toronto knew the potential consequences of the Raptors acquiring Leonard in a walk year … and were faithfully rewarded with the first championship in franchise history.

And now, the first spotlight of this high-profile, excitement-driven NBA season shall squarely shine on the sneaky-good Raptors.

We love how the NBA opted for the bold move of scheduling a Lakers-Clippers showdown on Opening Night, providing a worthy challenger — in terms of TV viewership — for Game 1 of the World Series.

In a quirky way, we’re also happy that Paul George (offseason shoulder surgery) won’t be available for the opener … adding to the intrigue of the Clippers-Lakers rematch on Christmas Day.

Whatever happens on Opening Night, the Xmas game will be the first whole meeting of LeBron-Anthony Davis vs. George-Leonard.

We love how the national pundits have already written off the Warriors for this season, in terms of reaching the 50-win threshold and/or advancing through the Western Conference playoffs.

Yes, Kevin Durant (Nets) and Andre Iguodala (Grizzlies … for now) have moved on from the club, and Klay Thompson will reportedly miss the entire season to rest his torn ACL … but Golden State still has enough firepower to be eminently respectable in the West.

Need we remind you that, four years ago, the Warriors reeled off 24 consecutive victories to launch the 2015-16 season … a year before Kevin Durant joined this title-ready group?

The lesson here: Never underestimate a dangerous team with a championship mindset. Especially with Stephen Curry and Draymond Green still in their prime years.

We love how Stephen Curry has been dismissed as an MVP candidate this fall, likely given his age (31) and the Warriors’ injury woes/free agent defections.

We beg to differ, though: The two-time NBA MVP might not hit 45 percent from 3-point range, due to the expected uptick in volume shooting, but he’s also a stealth candidate for supreme averages of 30 points, five rebounds and five assists.

If that’s the case … good luck short-circuiting Curry in the MVP race.

We love how the Warriors are moving into a state-of-the-art arena (in San Francisco) that could be a game-changer for decades to come.

Remember when The Palace Of Auburn Hills (home of the Detroit Pistons) debuted in 1988? Well, it remained the gold standard of NBA venues for at least a full decade, slowly but surely inspiring advanced designs for future sports complexes.

Check out this virtual tour of the $1.4 billion Chase Center. It’s a mind-blowing facility … and we’re not even talking about the Facial Recognition features for the Warriors’ practice court.

We love how Zion Williamson’s national-TV debut might occur on Christmas Day, when the Pelicans encounter the Nuggets in Denver.

That’s the upside of Williamson incurring a substantial knee injury during the preseason and being subjected to a reported recovery timeline of 6-8 weeks.

Of course, there’s a chance the 19-year-old Williamson comes back sooner than expected, perhaps early-to-mid December. But from a holiday perspective, can you imagine the extra buildup of Zion’s debut coinciding with Christmas Day?

We love how NBA pundits cannot dismiss the notion of Russell Westbrook breaking Oscar Robertson’s all-time record for triple-doubles — this season — despite donning a new jersey (Rockets) and being 43 triple-doubles shy of Big O’s lifetime achievement.

In his final three years with the Thunder, Westbrook averaged a triple-double for all three seasons, a staggering accomplishment that can never garner enough positive press.

The last two regular-season campaigns seemed anti-climactic, due to the media’s (likely warranted) obsession of where LeBron James would end up in free agency (July 2018) and the most crazy summer of blue-chip acquisitions in NBA history (July 2019).

The above subjects were incessant talking points nearly every day for the last two years; and when this wasn’t the case, the Lakers’ fall from grace — stemming from LeBron’s injury — became the story after the All-Star break.

We love how the NBA can focus on the positive storylines that will emanate from these games that matter; and given the incredible depth and talent of the Western Conference, many teams cannot afford rocky starts in October and November.

We love how the Atlanta Hawks could be constructing a prime championship contender for the upcoming decade.

**Point guard Trae Young averaged 19.1 points, 8.1 points and 0.9 steals in his age-20 season, rock-solid numbers for a lightning-quick performer who will surely get stronger in the coming years. For good measure, Young also shot 42 from 3-point range … while crossing the elite-level threshold of 30-plus points eight times.

**The Hawks’ Big Three of Young, John Collins and Kevin Huerter might have few perimeter-based peers in the Eastern Conference. Or the league itself, considering Atlanta ranked fourth overall in 3-pointers made and 10th in assists.

**The Hawks cleaned up on draft night, landing the top-10 tandem of De’Andre Hunter and Cam Reddish. Assuming Hunter and Reddish become bankable talents, Atlanta might have the best (and deepest) collection of 23-and-under talents.

We love how Vince Carter won’t be riding the pine for long stretches during this record-breaking campaign of 22 NBA seasons.

Carter’s an integral member of the Hawks’ bench rotation, albeit more of a perimeter asset (40 percent from 3-point range last year) … than an iconic monster dunker.

We greatly respect how deftly NBA Commissioner Adam Silver has turned the page from the preseason dealings with China … to the mega-hype surrounding this regular season.

We love how the NBA will stage its first-ever regular-season game in Paris (Hornets vs. Bucks on Jan. 24).

We’re also excited to put four years of high school French into action on that day, assuming there will be a French-language-only broadcast of this momentous event.

We love how the Portland Trail Blazers (53 victories last season) arguably possess the NBA’s best backcourt (Damian Lillard, C.J. McCollum), elite-level versatility, depth and size in the frontcourt and a ton of off-season motivation, after being swept by the Warriors in the Western Conference finals.

And yet, the Vegas-style experts expect the Blazers to incur a precipitous drop of 7-8 victories, compared to last year.

We don’t usually invest a lot of money on NBA prop bets … but sign us up for this one.

We love how the Milwaukee Bucks are the only runaway pick to repeat as a division champion.

Sure, the Rockets (Southwest), Celtics (Atlantic) and Nuggets (Northwest) are also strong choices to claim consecutive division crowns … but there’s also just enough parity to keep us out of the betting lines.

And that’s a good thing, because there’s nothing more tormenting than waiting for the April playoffs … in early November.

We love how the pace-driven and shot-happy Kings will be on NBA League Pass 80 times this year, with the lone exception being a nationally televised affair in March.

How pumped are we about this item? During the summer, we may have gone overboard, via Twitter, in predicting the Kings would notch more regular-season wins than the Lakers.

We love how the Utah Jazz pulled a major coup during the summer, through the acquisition of elite-level point guard Mike Conley Jr.

We love how Magic guard Markelle Fultz, the former No. 1 overall pick in 2017 (Philadelphia 76ers), looked fluid during preseason action, suggesting his confidence-building and mechanical-shooting problems of the past have been alleviated.

The kid doesn’t turn 22 until next May. This has all the makings of a true redemption story.

We love how the New York market has gotten a major boost with the additions of Nets stars Kyrie Irving and Kevin Durant (likely to miss this entire season); but let’s give some credit to the Knicks’ front office, as well.

For the first time in seemingly decades … the typically stubborn Knicks have seemingly embraced a full-on rebuild; and the core quintet of Dennis Smith Jr., R.J. Barrett, Kevin Knox, Julius Randle and Mitchell Robinson has a world of upside.

We love how the NBA has quietly discouraged clubs from outright chasing the No. 1 overall pick in next year’s draft, thanks to the new system of giving the bottom-4 clubs the same percentage chance at the top spot, via the Draft Lottery.

And as we saw back in June, holding a bottom-4 lottery ticket doesn’t even guarantee you the No. 1 choice. That honor went to the Pelicans … who had the seventh-best odds of grabbing Zion Williamson back in June.

We appreciate how the Charlotte Hornets have taken the proper, yet painful public stance of focusing on a long-term rebuild through the draft (and ‘savvy’ trades), instead of relying on NBA free agency to serve as the quick fix.

The Hornets’ main inspiration for this movement might have come within Southeast Division, where the aforementioned Hawks and Magic have focused on stockpiling draft picks, shedding big salaries and acquiring premium young talent by the bushel.

We love how the Pistons are essentially going all-in for this season (adding veterans Derrick Rose, Tony Snell, Markieff Morris, Tim Frazier), in terms of collecting a top-4 seed in the East and advancing through the playoffs.

Simultaneously, if things don’t work out this year, the club’s nicely positioned for a total rebuild shortly after that.

(NOTE: Andre Drummond and Reggie Jackson can be unrestricted free agents next summer.)

We love how the Grizzlies’ duo of Ja Morant (No. 2 overall pick from the June draft) and burgeoning superstar Jared Jackson Jr. will presumably be together for 7-8 years — if not longer.

And if Memphis can somehow land Anthony Edwards in next year’s draft, the Morant/Jackson/Edwards triumvirate might look eerily similar to the Thunder trio of Westbrook/Durant/James Harden, way back in 2009.

We love how the spirit of the early 1980s are alive and well in the Eastern Conference, where the Bucks, Sixers or Celtics are overwhelming choices to represent the East in next summer’s NBA Finals.

This revelation suddenly puts us in the mood to consume old YouTube videos of the great playoff clashes involving the 80s Bucks, Celtics and 76ers, regardless of the combination.

As a kid growing up in Michigan, and only having access to maybe 15-20 Pistons games on TV, my NBA fix was routinely satiated by the likes of Sidney Moncrief, Larry Bird, Julius Erving, Terry Cummings, Kevin McHale, Moses Malone, Paul Pressey, Dennis Johnson and Andrew Toney.

We love that reigning NBA MVP Giannis Antetokounmpo remains a robust bet to re-sign with the Bucks next summer, instead of taking his absurd talents to a major media market.

As a happy consequence, there might even be a championship or two in Milwaukee’s future.