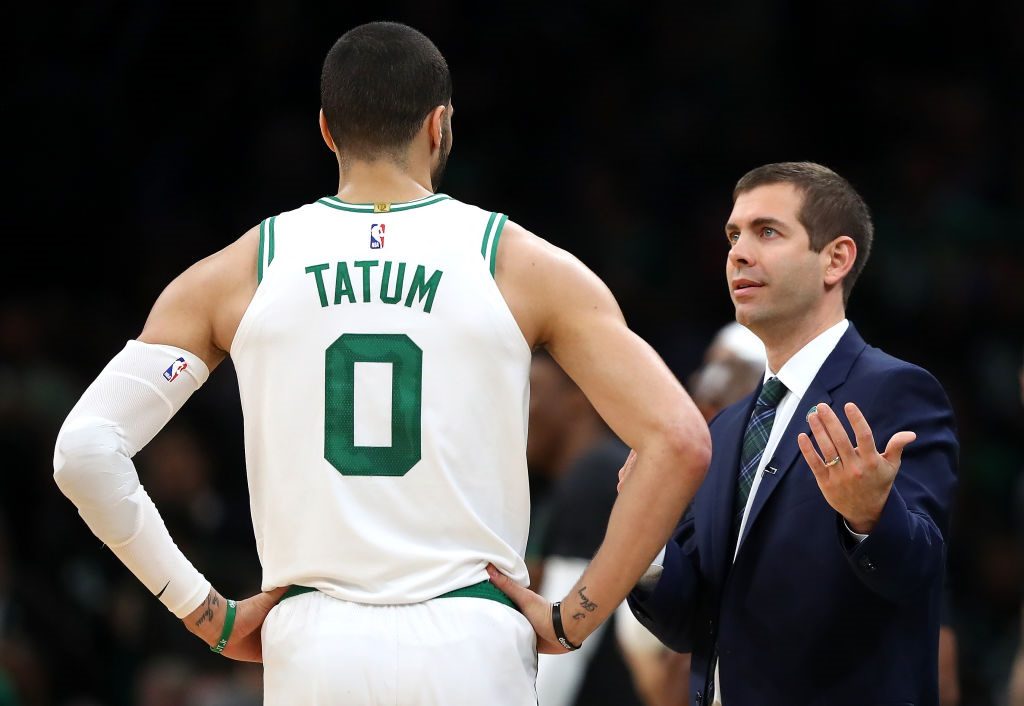 This might have been an interesting bet to wager against three weeks ago … but here we are.

Heading into Monday’s action, Boston (7-1) owned the best record in the Eastern Conference, along with the highest winning percentage of any NBA club (88 percent).

Not bad for a contentious squad from last year (earlier-than-expected playoff flameout) that endured three key defections during the offseason, losing Kyrie Irving (Nets) and Al Horford (76ers) via free agency, and then shipping disgruntled Terry Rozier to the Hornets, as part of the mega-trade for guard Kemba Walker.

You know Walker’s story: Led his college team (UConn) to a storybook national championship in 2011 and then drafted as the Hornets’ purported savior later that spring.

The main problem with that? Walker’s rookie campaign was the stuff of sheer misery, with the Hornets/old Bobcats posting a dreadful 7-59 record during the lockout-shortened season.

Adding insult to injury, Charlotte missed out on the No. 1 overall pick (Anthony Davis) during the 2012 NBA Lottery, and then compounded the Debby Downer situation by taking Kentucky’s Michael Kidd-Gilchrist at No. 2 — instead of Bradley Beal (3rd to the Wizards), Damian Lillard (7th to the Blazers) or Andre Drummond (9th to the Pistons).

Fast forward to the present: In his 9th NBA season, Walker finally has a supporting cast worthy of championship contention. At the very least, the native New Yorker has a strong chance of reaching 50 wins for the first time ever.

Things are certainly trending in that direction with the revamped-on-the-fly Celtics, who stealthily shook off a season-opening loss to the 76ers before reeling off seven consecutive victories.

Here are some notables about the streak:

**The Celtics have averaged 115.2 points per game during the seven-game run.

**Boston boasts an average victory margin of 13 points during this stretch.

**Boston’s seven-game run has been a quirky experience, with the Celtics facing just one West club (Spurs), two Eastern powers (Bucks, Raptors have a combined mark of 14-5) and three long-term rebuilding projects in the Knicks twice, Cavs and Hornets (combined record: 10-19).

You also know Tatum’s story: Boston experienced the best of both worlds in 2017, identifying the Duke star as a probable franchise linchpin … but also having enough confidence to trade out of the No. 1 overall pick (thanks to the aggressive Sixers seeking Markelle Fultz), as a means of stockpiling more assets for the future.

Tatum enjoyed a strong rookie campaign for a Celtics team that was seemingly on the precipice of a conference crown, averaging 13.9 points, 5.0 rebounds and shooting nearly 48 percent from the field; and who can forget that monstrous dunk over LeBron James during the Eastern Conference finals?

But things plateaued a bit in Year 2.

Sure, Tatum incurred modest bumps with scoring and rebounding, but the shooting percentages dovetailed … and the Celtics’ on-court chemistry — with Irving serving as the season-long face of discontent in Boston — seemed nonexistent for long stretches of play.

The result: The 2018-19 Celtics were bounced from Round 2 of the East playoffs, bowing out to the Bucks in five games.

In Year 3, however, Tatum’s bankable production (cumulative plus/minus rate of plus-93 since Oct. 26) has brought stability back to the Celtics lineup.

Which begs the question: Are the Celtics greatly improved, due to stronger team harmony and a more condensed player rotation?

The early answer suggests yes. However, let’s also remember that Boston has yet to experience a long road trip or a sustained cluster of games against top-flight competition.

Of course, that last statement might require a quick amendment. On Monday night, the Celtics will entertain the 6-3 Mavericks — the NBA’s only team with an unblemished road record (4-0).

And beginning Friay, Boston will brace for its longest road trip of the year, taking on Golden State, Sacramento, Phoenix, Denver and the Los Angeles Clippers.

In other words, we’ll soon find out if the old/new Celtics’ elite-level start goes way beyond a favorable schedule to open the season.

PrevPreviousBOWL PROJECTIONS: Will Ohio State or LSU get the plum No. 1 Playoff spot in Atlanta?
NextNFL CRUNCH TIME: Projecting the final order of NFC playoff seedsNext