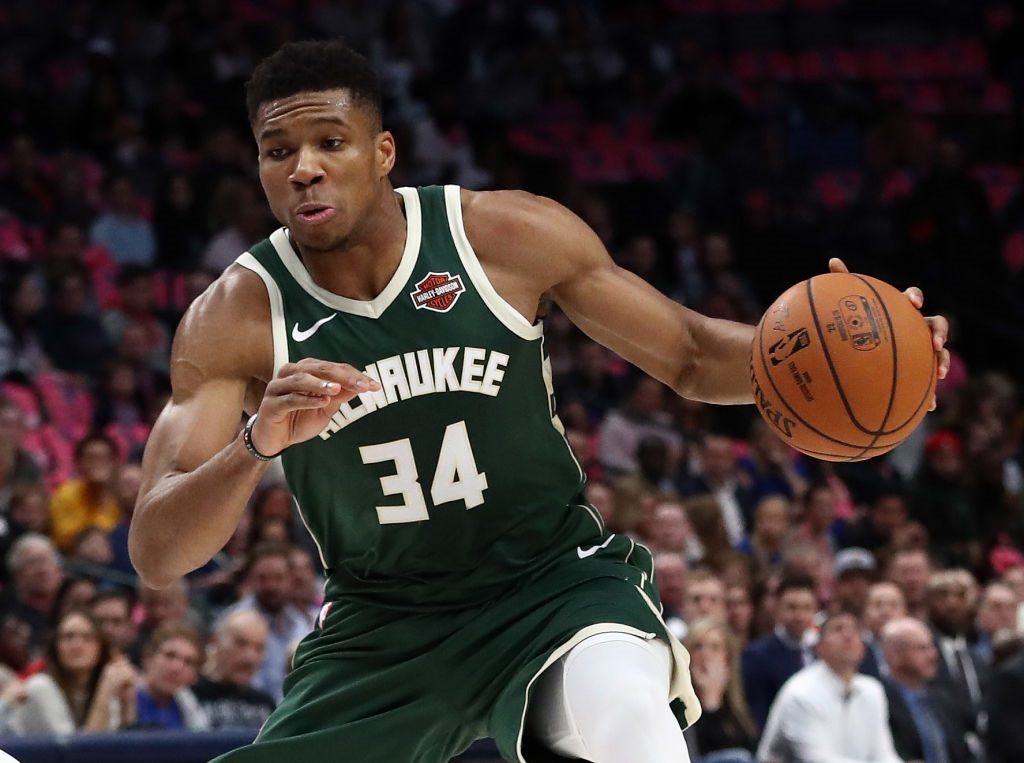 a) The Bucks were the only team last year to reach the 60-win mark, thus earning the No. 1 seed in the Eastern Conference playoffs.

b) Milwaukee has 12 intra-divisional games against Detroit, Chicago and Cleveland. As such, a 10-2 mark for this stretch seems eminently doable.

c) It’s a fait accompli situation that reigning MVP Giannis Antetokounmpo will receive and sign a super-max contract with the Bucks next summer. But the 24-year-old still has plenty to prove to the NBA universe, and it all starts with Milwaukee outlasting Philly for home-court advantage throughout the postseason.

d) The Bucks’ most daunting road trip involves a four-game, seven-day excursion to San Antonio, Golden State, Sacramento and Portland (Jan. 4-11). Of equal importance, there are separate road trips for facing the Lakers and Clippers. Not too shabby.

a) This is a shockingly low number for the defending champions, even with the high-profile exits of Kawhi Leonard and Danny Green.

Case in point: If Toronto had not moved heaven and earth to acquire Leonard in the summer of 2018, the Raptors’ over/under for 2018-19 surely would have been in the lower 50s (presumably with DeMar DeRozan on the roster).

Without a doubt, Leonard’s loss will be devastating to the Raptors’ repeat-title chances; but an 11-win dropoff from last season?

b) Speaking of roughing it without a superstar … the Raptors had a 17-5 mark during the regular season without Leonard.

c) The Raptors have a balanced roster of aging, but productive veterans, skillful reserves and an emerging star in Pascal Siakam. In other words, this roster easily has the stuff, when fully loaded, to eclipse 50 wins.

a) The Sixers should cruise to the Atlantic Division title, likely prevailing over the Celtics by 4-6 wins at season’s end.

Consequently, Philadelphia’s motivation to go all-out, every night, in search of 60 victories and a better record than Milwaukee might be fleeting … come mid-March.

b) All-Star Joel Embiid has reportedly gotten into supreme shape, in hopes of logging at least 70 games during the season.

That sounds great on paper, but we’re anticipating a healthy number of load management-related absences for the Sixers center, especially during grueling stretches of play.

a) Tough call here. The Celtics had a brutal campaign of only 49 wins, falling well short of the championship expectations that marked the preseason.

On the plus side, the club also let Kyrie Irving — a possible harmony-spoiler on/off the court — sign with Brooklyn during the summer … while trading for the eternally upbeat and eminently clutch Kemba Walker during the same July frenzy.

By all accounts, this swap-out should be a major boon to the Celtics’ built-to-win-now roster. Right?

b) Is Walker willing to score less and facilitate more with the Celtics, knowing his new team has been blessed with more talent than the Charlotte years?

It’s worth noting: The Bobcats/Hornets cleared 45 wins just once during Walker’s time with in the Queen City (2016).

If the over/under involved 47 and a hook … we might have gone the other way. But the Pacers, when fully healthy, seem like a rock-solid bet for 50 victories.

a) It’s hard to envision the Nets possessing home-court advantage for Round 1 of the 2020 playoffs, factoring in the club’s patient desire to sideline Kevin Durant (torn Achilles) for the entire season.

c) If Durant were fully healthy, it’d be easy to forecast a jump of 5-7 wins with KD and Kyrie Irving steering the ship. But a three-victory jump with Irving essentially replacing D’Angelo Russell reeks of uncertainty.

d) The Nets made tangible improvements last season, but the commitment to team defense must make a sizable leap forward. For the 2018-19 campaign, Brooklyn surrendered 120-plus points a staggering 24 times.

a) Orlando won 22 of its final 31 games last season, thus clinching a final-week spot in the Eastern Conference playoffs.

c) Markelle Fultz, the former No. 1 overall pick in 2017, looked fluid in preseason action the other night, suggesting his confidence-building and mechanical-shooting problems of the past have been alleviated. Heck, the kid doesn’t even turn 22 until next May.

a) This is the easiest prediction of the 15 Eastern clubs. The Pistons made some stealth moves during the summer, acquiring strong veterans like Derrick Rose, Tony Snell, Markieff Morris, Tim Frazier and possibly drafting a Greek Freak clone in 18-year-old Sekou Doumbouya (aka the French Freak).

c) The Pistons faded down the stretch last season, settling for a .500 record and the No. 8 seed; and yet, the Vegas experts are insinuating that Detroit’s middling success was a fluke by three or four games.

We’re not having it here, though.

You want a feel-good move at the sportsbook? Bet the proverbial house on the over.

a) History tells us Jimmy Butler can be a positive influence on title-contending teams, but does he have the temperament to carry clubs destined for maybe 42 victories?

b) The Heat were already pencil-thin at the 4 and 5 spots, and things could be even dicier, if Kelly Olynyk’s knee injury serves as an October-December hindrance.

c) It’ll be interesting to see how Miami weathers the retirement of Dwyane Wade, especially during crunch-time moments.

REASONS TO BE CAUTIOUSLY OPTIMISTIC

a) Think about it: The Vegas experts are forecasting a year-to-year drop of 16 games with the Hornets, strongly implying that Kemba Walker was an irreplacable asset.

However, the same Vegas number-crunchers aren’t expecting a sizable victory bump for the Celtics, who now have Walker in a starting role.

b) From our perspective, the Hornets are a year away from bottoming out in the NBA standings, while subtly making their claim for the No. 1 pick (in 2021) and a total roster rebuild.

In the meantime, though, it’s hard to envision Charlotte falling short of 25 wins with Miles Bridges, Michael Kidd-Gilchrist and new point guard Terry Rozier logging heavy minutes among the starters.

Bottom line: Don’t expect the Hornets to cruise past 20 wins until mid-March; and if so, the over/under conclusion could have a photo finish.

But we’re buying … for now.

REASONS TO BE WISHY-WASHY

a) Yes, we’ve committed to an UNDER pick, but we’re optimistic about the Knicks’ future — assuming the presumptive starting five of Dennis Smith Jr., R.J. Barrett, Kevin Knox, Julius Randle and Mitchell Robinson stays relatively injury-free for the season.

It feels weird to write this … but the Knicks finally have a strong grasp of a fruitful 5-year plan.

b) On the flip side, an 11 1/2-game jump seems implausible in the East, even with a potential domination of the Cavaliers, Wizards, Bulls and Hornets.

c) From our perspective, this year’s Knicks are last season’s Hawks … but with a tougher schedule.

a) The Hawks ranked 12th in scoring last (113.3 points per game) with one of the league’s youngest rosters.

b) Point guard Trae Young averaged 19.1 points, 8.1 points and 0.9 steals in his age-20 season, rock-solid numbers for a lightning-quick performer who will surely get stronger in the coming seasons.

For good measure, Young also shot 42 from 3-point range … while crossing the elite-level threshold of 30-plus points eight times.

c) The Hawks’ Big Three of Young, John Collins and Kevin Huerter might have few perimeter-based peers in the Eastern Conference. Or the league itself, considering Atlanta ranked fourth overall in 3-pointers made and 10th in assists.

d) By most accounts, the Hawks cleaned up on draft night, landing the top-10 tandem of De’Andre Hunter and Cam Reddish.

Assuming they become bankable talents, Atlanta might have the best (and deepest) collection of 23-and-under talents.

e) You can’t put a logistical price on eight intra-divisional outings with the bottom-feeding Hornets and Wizards. If Atlanta can go 6-2 or 7-1 versus Charlotte and Washington, while holding home serve against the West clubs, a five-victory jump should be a piece of cake.

b) The offense was similarly shaky, ranking 27th overall in scoring (104.9 points per outing).

c) Of the Bulls’ 60 losses last season, 30 involved a double-digit-point spread (one more blowout defeat than the 2017-18 campaign).

Put it all together … and a 12-game boost seems rather crazy, short of the Bulls going 11-3 or better against the Cavaliers and Pistons.

a) Will Kevin Love (four years, $120.4 million left on contract) spend the entire season in Cleveland, or will the Cavaliers execute a creative deal before the February trade deadline? If it’s the latter, then the club might fit snugly under the threshold of 24.5 wins.

b) The Cavaliers had a superb draft back in June (landing first-rounders Darius Garland, Dylan Windler, Kevin Porter Jr.) and could easily push for 35-plus wins for the 2020-21 season.

a) It’s eminently possible the Wizards will trade Bradley Beal before the February trade deadline, as a means of waving a white flag to the present and stockpiling draft picks and young personnel for the future.

b) Even with Beal in the lineup, it’s hard to envision Washington enjoying a better season than New York or Cleveland. We’re talking about a D-plus roster … with almost zero motivation to go all-out for playoff contention in April.

c) The Wizards should be prime candidates for a bottom-4 record by season’s end, giving ‘em a 20-percent chance at landing the No. 1 pick in the June draft.

The potential prize: University of Georgia signee Anthony Edwards (6-foot-4, 210 pounds) has the initial look of another … you guessed it, Bradley Beal.