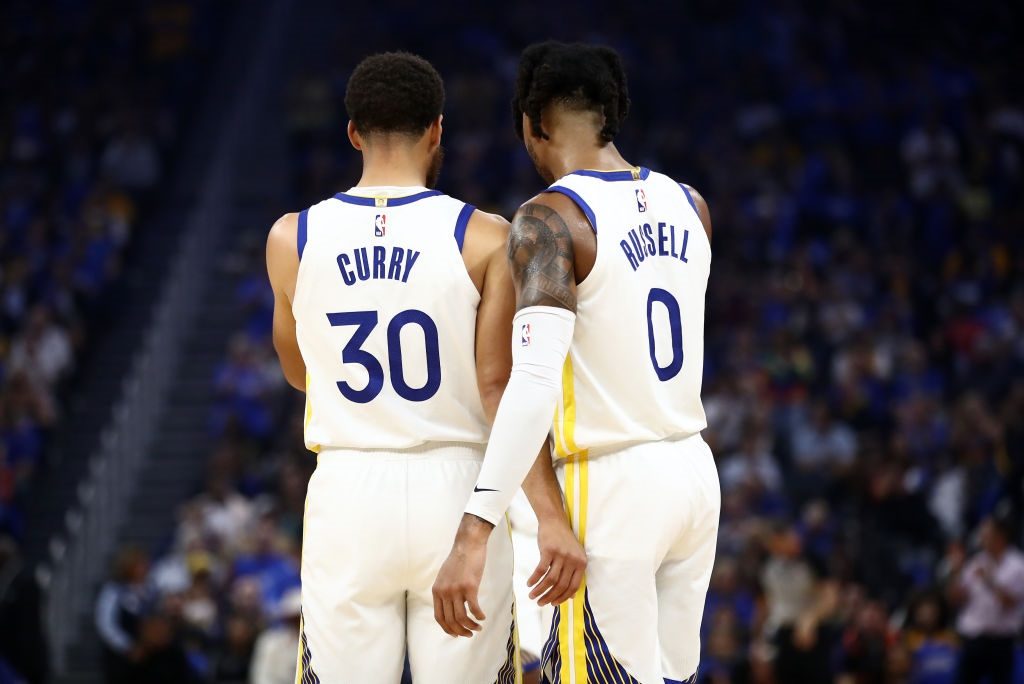 Fittingly, while writing this mini-section, our analysis coincided (in real time) with ESPN airing a highlights package of Golden State’s season-opening defeats — a pair of blowout losses to the L.A. Clippers and Oklahoma City Thunder.

ESPN’s package, whether intentional or not, infers that Stephen Curry and Draymond Green have been rushing their shots too much, perhaps out of obligation to shoulder more of the offensive load, compared to previous Warriors clubs (three championships since 2015; five straight appearances in the NBA Finals).

There were also dour references to Curry and new acquisition D’Angelo Russell, who hold sluggish combined averages of 33 points per game and 21-percent shooting from behind the arc.

Whether these negative trends hold true, over time, remains to be seen. But right now, we’re rolling with the Warriors being caught in an early adjustment period of achieving balance and rhythm.

The defensive outlook might be more worrisome. The Warriors (dead-last in points surrendered per game, 29th in average point differential) must quickly find their defensive footing in half-court situations.

Allowing the opposition to average 17 made triples per game would be an absolute recipe for disaster.

On the plus side, it’s also a slightly deceiving statistic.

Bottom line: As stated in last week’s NBA Preview, even without Klay Thompson (torn ACL last June) for much or all of this season, the Warriors are still good enough to flirt with 50 victories and contend for a juicy spot in the Western Conference playoffs.

For experienced, battle-tested clubs, it’s all a feeling-out process.

REVELATION #2 — The Timberwolves’ 3-0 start shouldn’t be taken lightly, assuming they take care of business in the other conference

On the surface, an opening slate of Brooklyn (road), Charlotte (road) and Miami doesn’t seem particularly daunting, given the high-profile absences of Kevin Durant (Achilles injury) and Kemba Walker (signed with Celtics in the offseason).

However, let’s remember that Kyrie Irving carried the Nets in his franchise debut, dropping 50 points in the overtime loss to the T-Wolves. On most nights, this would be enough to lead a playoff-caliber squad to a home victory.

Also, for its home opener, Minnesota trailed Miami by seven entering the fourth quarter, before exploding for 39 points in the final frame.

Put it all together, and the Timberwolves may have identified the proper three-point plan for earning a surprise berth in the Western Conference playoffs:

b) Exert top-10 precision and effort with the crucial team categories of steals (3rd overall), rebounds (4th) and assists (7th).

c) Minus the TV-friendly outings with Milwaukee, Philadelphia, Boston and Toronto, go all-out to sweep the other 22 crossover games within the mediocre Eastern Conference.

TAKE #1
We’re not fans of predicting MVP races in October and November; but we certainly don’t mind regaling our favorite stat from the NBA’s launch week:

How is that even possible?

The second-year dynamo could soon be the talk of the league … if the undefeated Hawks (2-0) can make a major jump, record-wise, one year ahead of schedule.

TAKE #3
We expected the Lakers (2-1) to be among the NBA’s best teams in the first month, playing 10 of their first 14 games at Staples Center (including one road outing) and drawing lesser-lights like Charlotte, Memphis, Chicago, Miami, Phoenix and Oklahoma City during this same stretch.

On the flip side, we didn’t anticipate Los Angeles enjoying top-10 defensive rankings with 3-pointers made and 3-point percentage.

TAKE #4
There’s no excuse for the fleet-footed, shot-happy Kings ranking dead-last in scoring (96 points per game) and 29th in team assists.

There’s also no justification for three straight blowout losses, even when breaking in a new head coach (Luke Walton). Ugh.

From our perspective, Washington has the league’s most anemic starting five and perhaps the worst roster in the league, top to bottom.