ALLEN IVERSON: 7 air-tight reasons why ‘The Answer’s Big 50 countdown snub has no merit 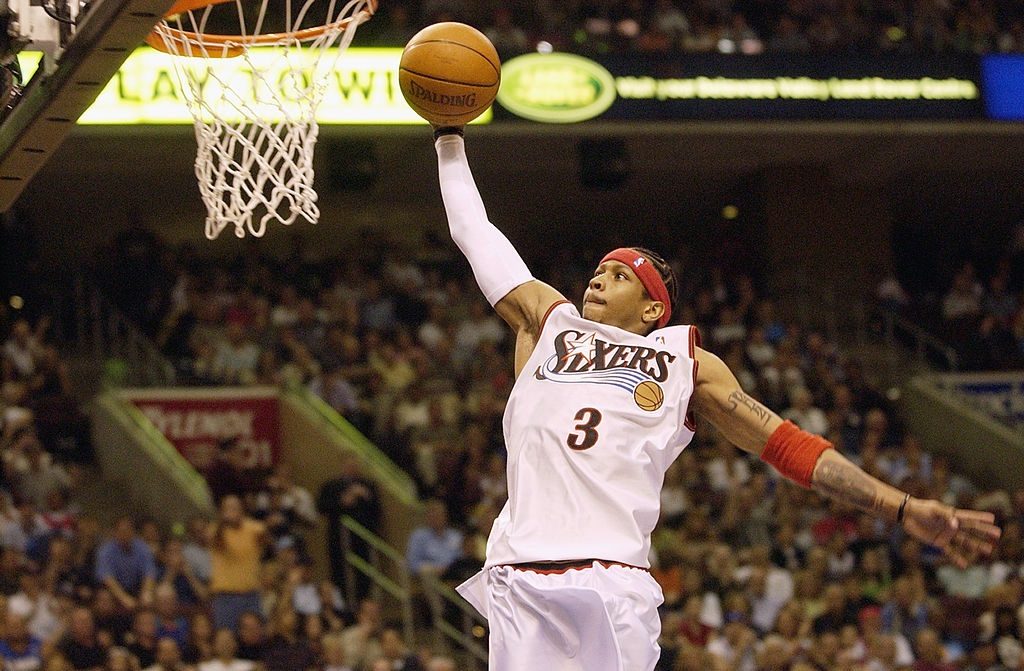 Hardly anything about Allen Iverson’s decorated NBA career screams Honorable Mention, outside of maybe his numbers for rebounding and blocked shots.

And even then, let’s give it up for one of the most physically imposing 6-foot players in NBA lore.

Yes, the four-time scoring champion, seven-time All-NBA performer, 11-time All-Star and 2001 NBA MVP left an indelible mark with the league, covering 14 seasons, so much that his enshrinement candidacy for the Basketball Hall of Fame (Class of 2016) had all the drama of a clash featuring the Harlem Globetrotters and Washington Generals.

And yet, that didn’t stop Bleacher Report from stirring up the masses last month, when its revised listing of the NBA’s 50 Greatest Players offered a major omission in Iverson.

At the risk of mocking Bleacher Report and subsequently under-selling the final members of the publication’s Top 50 list, we’re here for one reason: Provide ample and incontrovertible evidence that Iverson easily belongs on the revised Big 50 … maybe even a more exclusive cut of 30 all-time greats.

Coming out of Georgetown (circa 1996), Iverson elicited comparisons to Hall of Famer Isiah Thomas; but even the Pistons legend didn’t have the all-encompassing pressure of being a No. 1 overall draft pick upon entering the league.

(In 1981, Thomas went second overall to Detroit. DePaul’s Mark Aguirre served as the No. 1 overall selection for the expansion-addled Dallas Mavericks.)

Fast forward to the present: With every player from that legendary 1996 draft now retired from the NBA, we can say — with reasonable confidence — that Iverson ranks no lower than No. 2 (after Kobe Bryant), while keeping a safe distance from the likes of Steve Nash, Ray Allen, Peja Stojakovic, Marcus Camby, Shareef Abdur-Rahim, Stephon Marbury, Jermaine O’Neal and Antoine Walker.

Let’s start with the most memorable part of Iverson’s inaugural season with the Sixers.

In April 1997, with the season winding down, Iverson lit up the opposition and posted five consecutive games of 40-plus points — an NBA rookie record.

For this five-game tsunami, Iverson rolled for …

Outside of that, the list of Iverson-Sixers teammates from 1996-2006 reads like a hard-working, but incomplete roster in the middle of a total rebuild.

And yet, Iverson still carried the 76ers to six playoff berths for that initial 10-year period, advancing through at least one round four times and getting all the way to the NBA Finals in 2001 (56-26 overall record).

Within this prolific stretch, Iverson also launched an eight-year run of averaging at least 42 minutes per game.

Where to begin for this illustrious category?

**During the playoffs, Iverson ranks second in all-time scoring average (29.7 per game), trailing only the inimitable Jordan (33.5 ppg).

**With the Sixers, Iverson averaged more than 30 points per game on four different occasions — leading to three scoring titles. Ironically, his most prolific scoring campaign (33 ppg in 2005-06) didn’t result in a scoring crown.

On the surface, the lack of NBA championship rings represents a valid argument for keeping certain superstars off the Big 50 list.

However, 11 players from the Top 50 countdown never won an NBA title:

We previously referenced Iverson’s rare company with the four other players who’ve captured at least four NBA scoring titles; but that’s nothing, compared to the following group:

In NBA history, the list of retired/active superstars to post career averages of 25-plus points and 6-plus assists includes:

**NOTE: James Harden, Russell Westbrook and Damian Lillard could be candidates for this elite-level grouping in the next year or two.

This catch-all category serves as bonus points within Iverson’s case for basketball immortality, at least in the eyes of Bleacher Report:

**Iverson likely ranks among the fastest 10 guards in league history, when toting the rock from end to end.

**No ticket-buying or TV-consuming fan ever got shorted by Iverson, who gave supreme effort and logged heavy minutes every night. (Read: No ‘load management’ excuses here.)

**From a pop-culture standpoint, Iverson’s the first NBA athlete to appear in a national commercial with rapper Jay-Z.

**From what I gather, Iverson might have been the NBA’s first superstar athlete to wear cornrows on a regular basis.

**And last but not least, Iverson warrants credit for delivering one of the most epic sound bites in major-sports history.

PrevPreviousMLB PLAYOFFS: History tells us the red-hot Nats should pump the brakes on winning the NL pennant too soon
NextFANTASY FOOTBALL: Early positional rankings for NFL Week 7Next