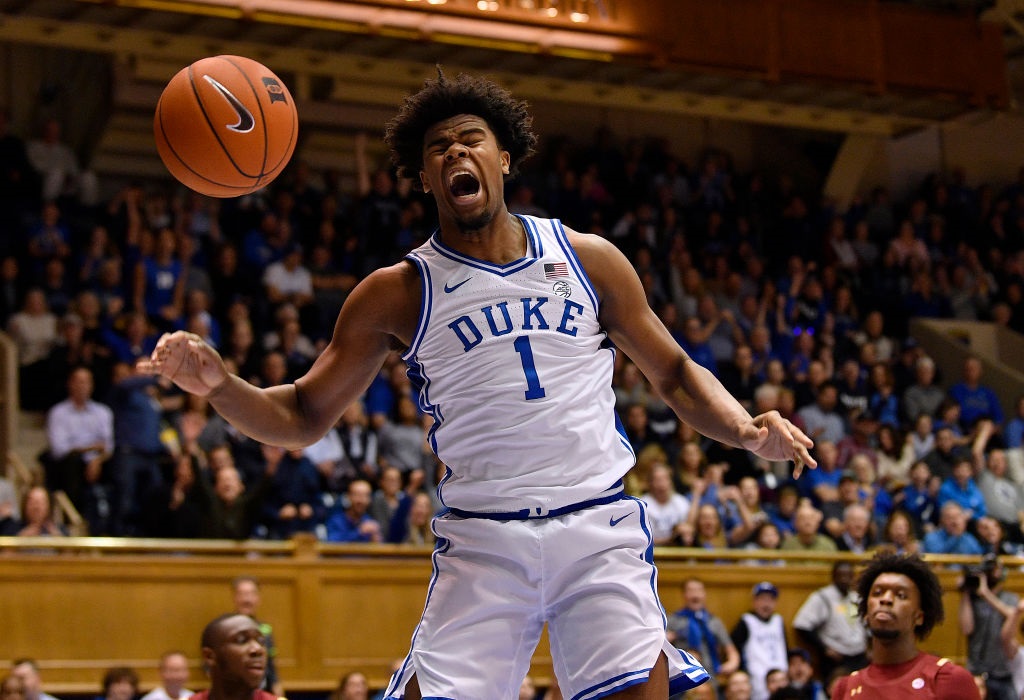 a) Duke (No. 2 in Associated Press poll) projects to be an easy-breezy option for the Selection Committee, in terms of commandeering a top regional seed … and serving as opening-weekend host in nearby Greensboro.

b) Auburn’s one of only two top-20 KenPom teams with an unblemished record (along with San Diego State); but then again, we would expect nothing less from an eminently doable schedule which includes Colgate, Richmond, Furman, Lehigh, New Mexico, Vanderbilt, Mississippi State … and North Carolina State.

On the plus side, we’ll glean more about the Tigers in short order, with Auburn encountering Georgia (home), Alabama (road) and Florida (road) over a nine-day stretch.

The Terps’ last two wins over Indiana and Ohio State were both decisive, and their offense has once again become a per-game threat for 80-plus points.

Will this translate to a prolonged winning streak? That’s hard to say. Maryland has a tough roadie against Iowa tonight, followed by a Super Tuesday trip to Wisconsin.

a) In previous weeks, there might have been some trepidation with Butler, in terms of the Selection Committee blindly putting the Bulldogs in the Indianapolis regional … as a 2- or 3-seed.

But with this newfound rise to the top line … it’s an easy call for everyone. Problem solved!

Of course, from a ‘chalk’ perspective, it’s fair to wonder if a Butler-Michigan State regional final would be a crowd advantage for either school?

At this point, the Bulldogs and Spartans are interchangeable as 1 or 2.

b) Michigan State has been on a certifiable roll since the disheartening December defeat to Duke, enjoying an average victory margin of 22.5 points in their last eight games.

Within this run of success, the Spartans (the Big Ten’s lone unbeaten in conference action) have vaulted into top-3 spots with the KenPom (3rd overall), BPI (2nd) and Strength of Schedule rankings (3rd).

The only remaining nut to crack, in terms of warranting a 1-seed in the NCAA tourney? Michigan State currently ranks ninth in the NCAA’s ‘Net’ rankings.

The Mountaineers’ 12-2 record to date hasn’t been constructed on a foundation of easy opponents.

a) At this pace, an elite-level Kansas team (No. 1 in the NCAA’s ‘Net’ rankings … three straight victories over Stanford, West Virginia, Iowa State) should have no problems securing placement into the Omaha sub-regional.

b) Go ahead and shortchange San Diego State’s seasonal resume, at your own peril.

The undefeated Aztecs possess top-15 rankings with the KenPom and BPI charts, the result of posting double-digit victories over Iowa, Creighton and Utah.

c) It’s been a crazy campaign for Kentucky, which knocked off a No. 1 in early November (Michigan State), got booted from its own top ranking a week later (courtesy of Evansville) and then recently a produced a robust upset of Louisville, which also had the AP No. 1 ranking back in late November.

But alas, we’re supremely confident about the Wildcats’ chances for success during SEC play. Over time, the proverbial cream rises to the top.

d) Three weeks ago, Ohio State (5th with Strength of Schedule) seemingly had the requisite star power, perimeter depth, coaching acumen and defensive/rebounding proficiency to be a viable top seed.

However, three respectable, yet still-baffling defeats to Minnesota, West Virginia and Wisconsin, along with one expected road defeat versus Maryland, have fueled the Buckeyes’ sudden drop to the 3-line.

As such, Ohio State should no longer garner automatic consideration for the Cleveland site on opening weekend.

At the same time, don’t be shocked if the Zags breeze through the WCC regular season with nary a setback.

b) Could this be the year Baylor sheds its tourney underachiever label and reaches the Final Four?

So far, so good for the No. 4 Bears (AP poll), who already claim signature wins over Arizona, Butler, Washington, Texas, Texas Tech and Villanova.

c) On the surface, Oregon (No. 9 in the AP poll … seasonal victories over Arizona, Seton Hall, Memphis) deserves a better fate than a 3-seed in the West.

However, at this time, the Ducks don’t have a top-10 ranking with KenPom, ESPN’s BPI or the NCAA’s ‘Net’ countdown.

On the plus side, Oregon serves as our most-regarded 3-seed, putting the school back on the West Coast for regional weekend (Los Angeles), as opposed to being a No. 2 for the New York regional in recent weeks.

d) Here’s a prime example of the regions’ requisite strength and balance, when attempting to go five-deep with each one:

Michigan boasts wins over No. 1 Gonzaga, Purdue, Iowa, Iowa State, Creighton and North Carolina … and the Wolverines were still the final 5-seed with this week’s breakdown.

Does that seem a tad unfair, especially with Michigan weathering the injury-based absence of star forward Isaiah Livers?

The upside here? This could be the last time Michigan has to worry about a 5-seed … although the upcoming opponent triumvirate of Iowa (road), Penn State (home) and Illinois (home) could be a little tricky.

PrevPreviousNFL: The ‘You Are Looking Live!’ preview for Divisional Playoff Weekend
NextNFL PLAYOFFS: This year’s Super Bowl, whatever the matchup, should be an easy sell for the leagueNext