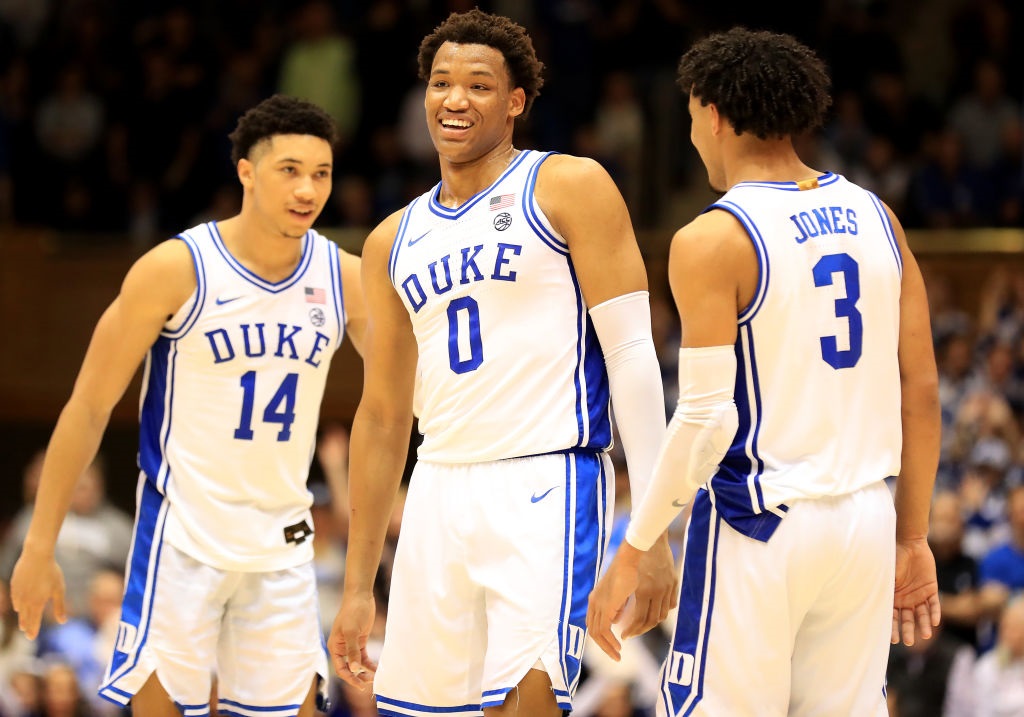 BATSBY Sports offers its seventh deep dive into predicting the top 20 seeds for the NCAA basketball tournament (five per region), with conference action now heading for the home stretch.

a) It’s now painfully clear: Next month, the NCAA Selection Committee cannot penalize Gonzaga and San Diego State (one combined defeat) … by placing both championship contenders in the same bracket.

Simply because both schools are located on the West Coast.

It’s not a sound strategic move, especially in this Year of Basketball Parity.

Exhibit A: San Diego State and Gonzaga rate 1st and 2nd in the NCAA’s NET rankings. With this type of transparency, it would be impossible to justify both schools meeting in the Elite Eight round.

b) Duke currently rates No. 1 with ESPN’s Basketball Power Index, No. 3 in KenPom and No. 6 with the NCAA’s NET rankings.

In other words, it might be a tough sell to drop the Blue Devils (winners of six straight) onto the 2-line. And yet, theoretically speaking, there’s very little separation between San Diego State serving as a low No. 1 seed (due to a low Strength of Schedule quotient) … and Duke being the highest-valued No. 2.

At this pace, the Tigers (three-way tie for first place in the SEC) are closer to a 3-seed … than a 5 come Selection Sunday.

d) For weeks, we’ve been touting the top-heavy Big East for its night-in, night-out excellence. In that vein, it only makes sense to include Seton Hall, the conference leader (10-2 … two games over Villanova, Creighton), as a robust 5-seed in the South.

Should the Pirates be a notch or two higher, with seeding?

Uh, maybe. But right now, when factoring in the most renowned metrics sites, Seton Hall has cracked the top 15 with only KenPom and Strength of Schedule quotient.

a)  Let’s start with a minor humble-brag: The top eight teams from Saturday’s In-Season Selection Show on CBS, along with the regional destinations for each school, were an exact match to BATSBY’s seed-projections piece from last week.

b) Does Kansas (losses to Duke, Baylor, Villanova) meet the proverbial Eye Test of a popular championship pick, especially with the lingering fallout of the Kansas State brawl?

The Jayhawks are the nation’s only team to currently boast top-4 tallies with KenPom, the NCAA’s NET rankings, ESPN’s BPI and Strength of Schedule quotient.

Bottom line: Kansas should be the top seed for the Indianapolis regional.

d) With rock-solid wins over Florida, Purdue, Tennessee, Clemson, North Carolina, Georgia Tech, Louisville and Virginia, Florida State makes good sense for a 3-seed … even if the Seminoles rank no higher than 15th with the Big Four analytics sites.

Fortunately for (irrational) people like me, though, the national metrics-makers are still wild about the Spartans, given their brutal schedule and penchant for knocking off solid teams on the road (Seton Hall, Illinois, Minnesota).

For example, despite the 17-8 overall record, Michigan State stands no worse than 11th with KenPom, ESPN’s BPI, the NCAA’s NET and Strength of Schedule rankings.

Hence, the solid 4-seed in the highly competitive Midwest.

At this point, the Bears (21-game winning streak) boast road wins over Kansas, Florida and Texas Tech, along with strong victories over Arizona, Butler, Texas, Iowa State and Villanova.

b) Maryland absolutely warrants a spot on the 2-line, the result of posting seven straight victories and rocketing to the top of the Big Ten standings.

The only downside here: The Terrapins (ranked in the top 11 with KenPom, ESPN’s BPI and the NCAA’s NET listing) could potentially be prime fodder for Baylor in the regional final, with the Bears possessing a massive home-area advantage (Houston’s Reliant Stadium).

c) West Virginia merited a drop to the 3-line based on the rough week of back-to-back defeats to Oklahoma (road) and Kansas (home).

There’s also this: Yes, the Mountaineers have a 75-percent win percentage for the season; but when charting their six losses, just one involved a spread of six or fewer points.

d) Kentucky (11-2 in its last 13 games) keeps making subtle improvements in the BATSBY Sports projections, which is fine.

However, the NCAA Selection Committee doesn’t share our appreciation for the Wildcats, who own impressive wins over Louisville, Michigan State, Texas Tech, Tennessee, Alabama and Georgia (twice).

e) Initially, we had full plans on placing Creighton over Butler, among the 5-seed candidates.

However, here’s the deal: The Bulldogs have a worse Big East record than the Blue Jays, but Butler still owns a best-of-three metrics edge over Creighton — citing the NCAA’s NET listing (plus-6) and ESPN’s BPI (plus-8).

At the same time, don’t be shocked if the Zags breeze through the WCC campaign with nary a setback. Some of these early to mid-year returns in conference play have been seismic blowouts.

With this momentum, it sets up a potential Sweet 16 encounter with Louisville … and a possible rematch with Gonzaga in the West final.

What have the Red Raiders been up to lately? On paper, the 4-3 record in their last seven games shouldn’t excite the masses.

However, of the three defeats, Texas Tech incurred a two-point loss to Kentucky, a three-point road loss to Kansas … and the sluggish defeat to TCU had been avenged on Monday night — by a 46-point margin.