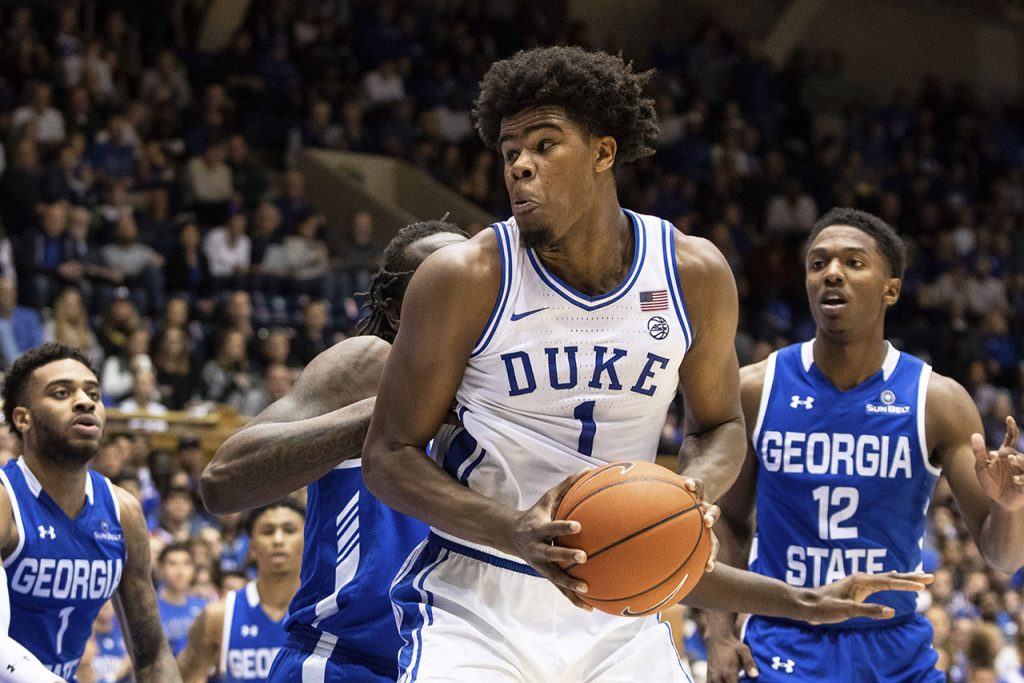 BATSBY Sports offers its ninth deep dive into predicting the top 20 seeds for the NCAA basketball tournament (five per region), with conference action now heading for the home stretch.

a) It’s little eerie that Gonzaga and San Diego State both lost on the same day last week … after incurring one combined defeat for the whole season, prior to the same-day setbacks.

But in the grand scheme of things, it didn’t do much to drop either school from the 1-line.

On the flip side, it’s worth noting that when charting ESPN’s College Basketball Index, the NCAA’s NET listing, the Strength of Schedule quotient and KenPom rankings — otherwise known as the Big Four analytics sites — Gonzaga maintained a top-2 slot for just one site (ESPN’s BPI).

And San Diego State rates no higher than fourth with any of the metrics.

b) Duke currently rates No. 3 with ESPN’s Basketball Power Index, No. 5 in KenPom and No. 6 with the NCAA’s NET rankings.

As such, it would be a tough sell to drop the Blue Devils off the 2-line, even with last week’s blowout loss to NC State.

c) Villanova (five straight victories) has rebounded nicely from the three-game slide around the midseason point. The metrics sites hold a similarly favorable opinion of the Wildcats, placing the club squarely in the 12-16 range nationally.

Put it all together, and Villanova seems to be a strong bet for the New York regional, with a potential clash against Duke in the Sweet 16 round.

d) In this forum last week, we expressed some guilt about denying West Virginia a 3-seed in any region.

However, after back-to-back defeats to Texas and TCU — hardly the Big 12’s biggest, baddest powers — the Mountaineers should be eminently thrilled with the 4-slot.

e) Let’s welcome Oregon (22-7 overall, tied for 1st in the Pac-12) back into the Projections mix, the happy result of the Ducks’ most recent victories over Arizona and Oregon State.

Speaking of the Pac-12 race … can you believe that UCLA currently shares the conference penthouse with Oregon?

Just a few weeks ago, a well-connected acquaintance of mine openly wondered if new Bruins head coach Mick Cronin would be a one-and-done casualty in Westwood.

a)  Let’s start with a minor humble-brag:

The top eight teams from the In-Season Selection Show on CBS (Feb. 8) along with the regional destinations for each school, were an exact match to BATSBY’s seed-projections from three weeks ago.

So, we’ve got that going for us … which is nice.

b) Forget about Kansas’ three high-profile defeats to Baylor, Duke and Villanova. The Jayhawks’ revenge-fueled road upset of Baylor likely stands as the year’s most impressive national victory.

Here’s something else to celebrate: Kansas currently ranks No. 1 on all Big Four metrics sites — becoming the first school to accomplish the feat all season.

Bottom line: Kansas has essentially sewn up the top spot in the Midwest regional (Indianapolis); and at this pace, the Jayhawks are probably the favorites for the No. 1 overall seed on Selection Sunday.

Plus, the Strength of Schedule trends should remain solid for March and Championship Week, since the Atlantic 10 has five viable options for the NCAA tournament (Dayton, St. Bonaventure, Duquesne, Rhode Island, Richmond).

In fact, the Seminoles might merit a spot on the 2-line, this time next week.

Fortunately for (irrational) people like me, though, the national metrics experts remain firmly in the Spartans’ corner, given their brutal schedule and penchant for knocking off solid teams on the road (Seton Hall, Illinois, Minnesota).

For example, despite the 19-9 overall record, Michigan State stands no worse than 13th with KenPom, ESPN’s BPI, the NCAA’s NET and Strength of Schedule rankings.

f) There’s a simple explanation for Seton Hall’s drop to the 5-line, despite owning an outright lead in the Big East standings (12-3, one game ahead of Creighton and Villanova):

Charting ESPN’s BPI, the NCAA’s NET listing and KenPom, the Pirates have a cumulative national average of 19th overall.

a) The top-seeded Bears still boast road wins over Kansas, Florida and Texas Tech, along with strong victories over Arizona, Butler, Texas, Iowa State and Villanova.

Plus, they’re perfect geographic fits for the Houston-based regional, in terms of putting fannies in the seats.

b) Maryland walked the plank of potential embarrassment this week, staring at a 17-point deficit versus Minnesota and the prospect of back-to-back road defeats.

But then, one of the season’s most stunning last-minute comebacks occurred against the Gophers; and as a happy result, the uber-lucky Terrapins remain solid choices for a 2-seed … and the Big Ten regular-season title.

c) Our love and appreciation for Creighton (No. 8 in the NCAA’s NET rankings) didn’t happen overnight, explaining why the Bluejays have reached the 3-line only twice this season.

But late than never here. Creighton has won nine of its last 10 Big East outings, highlighted by road victories over Villanova, Seton Hall and Marquette … and its offensive-efficiency marks have few peers throughout the nation.

d) Kentucky (15-2 in its last 17 games) keeps making subtle improvements in the BATSBY Sports projections, which is fine.

What’s more, for a large chunk of time this season, Kentucky hasn’t cracked the top 20 for KenPom, the NCAA’s NET listing or ESPN’s BPI. Go figure.

e) It’s a simple proposition for BYU finally cracking this survey: Knocking off Gonzaga at home, and it’s NOT a major surprise … means the Cougars are on track for some Selection Sunday love from those building the brackets.

a) Gonzaga (victories over BYU, Washington, Arizona, North Carolina, Oregon; top-3 rankings with ESPN’s BPI, KenPom and the NCAA’s NET listing) had enough seasonal clout to get thumped by BYU (on the road) and still claim the West’s top seed.

But we wouldn’t recommend any other regular-season/conference tournament defeats from this point forward.

With this metrics momentum, it sets up a potential Sweet 16 encounter with Louisville … and a possible rematch with Gonzaga in the West final.

c) Despite the nine seasonal losses, Ohio State still has prominent tallies with KenPom (8th), ESPN’s BPI (10th) and Strength of Schedule (No. 5).

With this metrics clout, the Buckeyes are now closer to the 3-line … than the 5-spot.

Not bad for a team that toiled through a 2-7 start in Big Ten play.