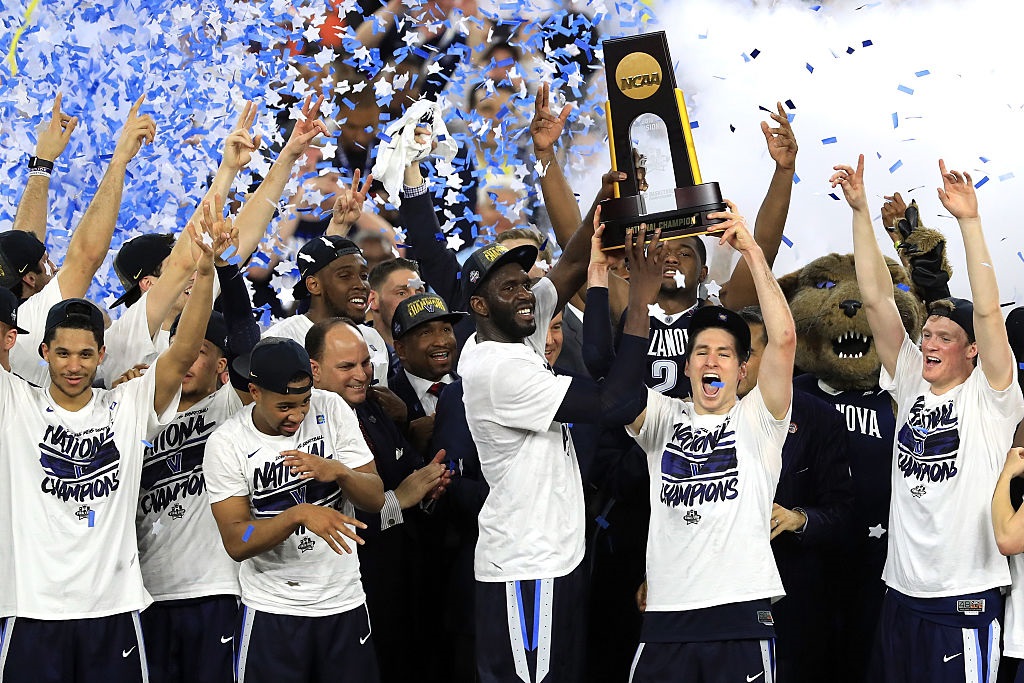 BATSBY Sports offers a countdown of the NCAA Tournament’s greatest and most significant moments of Championship Monday – covering the last 45 years.

From 1964-88, the NCAA enjoyed a 25-season run of settling each championship game in regulation play.

However, since 1989, we’ve had four overtime classics:

The Wolverines squandered a 13-point lead in the second half (62-49), and then rallied back in the closing seconds, needing a pair of Rumeal Robinson free throws to force the extra session.

It wasn’t the smoothest of experiences, but the basketball gods were still smiling on Michigan, based on two crucial occurrences:

a) With three seconds to go, Robinson drew a ticky-tack touch foul while driving through the lane. He also wasn’t in the act of shooting, frustrating the Seton Hall faithful even more. On the one-and-one, Robinson buried both free throws under tremendous pressure.

b) Robinson was a marginal-at-best shooter from the charity stripe. In fact, I hold vivid recollections of the burly guard missing late free throws against Minnesota (earlier that season), with Michigan choking away a road victory that seemed like a lock.

TV viewers couldn’t have asked for a better championship game, factoring in the up-tempo scoring, two Hall of Fame coaches (Lute Olson, Rick Pitino) and a flood of future NBA stars duking it out in Indianapolis.

From a history perspective, here’s the biggest takeaway:

In 1997, Arizona became the first team in NCAA history to upend three different No. 1 seeds in the same tournament.

We’ll cover this classic in greater detail later in the countdown.

The Cavaliers probably had no business being in this championship game, after needing two implausible miracles to beat Purdue (regional final) and Auburn (national semifinals) in the previous two rounds.

But there they were … overcoming another late deficit to take down the Red Raiders in overtime.

Texas Tech owned a three-point lead with under 20 seconds to play … and was seemingly content with letting Virginia attempt an uncontested layup.

However, Texas Tech experienced a momentary lapse of reason, subsequently collapsing toward the basket and allowing Virginia star DeAndre Hunter to nail a game-tying three-pointer with 12.9 seconds remaining.

If the Red Raiders had simply allowed the uncontested two, they would have put the Cavaliers into the awkward position of fouling to get the ball back.

Let’s address the most important championship game of the last 50 years — Bird vs. Magic.

In the late 1970s, college basketball was just finding its stride with national audiences. In fact, many could argue the college game offered more entertainment than the NBA, at this juncture.

As for 1979, the NCAA couldn’t have staged a better title-game clash.

Michigan State, which struggled for long stretches of the Big Ten season, caught fire in the latter stages, with Earvin ‘Magic’ Johnson, Greg Kelser and the Spartans eventually playing their way to a 2-seed … and Championship Monday berth.

On the other side, the nation was captivated with Larry Bird’s Indiana State team, which entered the NCAA tourney undefeated … and then produced thrilling wins over Arkansas, Oklahoma and DePaul in the earlier rounds.

One more thing: Thanks to NBC (no ESPN at the time), many college fans were getting their first-ever look at Bird’s exploits with the Sycamores.

This matchup-within-the-matchup had the makings of a heavyweight fight, with the Bird-Magic tango bringing an absurd amount of hype to Salt Lake City (site of the Final Four).

The result: A classic battle … and the highest TV ranking in college basketball history (35-plus million viewers; a whopping 24.1 Nielsen rating).

In the opener, Kansas raced to a stunning 40-12 lead over North Carolina, before the Heels sparked a stellar comeback in the second half, cutting the Jayhawks’ lead to five with nine minutes left.

For the nightcap, Derrick Rose (25 points, nine boards) and Chris Douglas-Roberts (game-high 28 points) were too much for UCLA’s Russell Westbrook (22 points) and Darren Collison, as Memphis roared into the title game with a 78-63 win.

Two nights later, Kansas rallied from a big deficit in the final minute, forced overtime (thanks to Mario Chalmers’ rainbow three-pointer) and eventually clinched the first national title for coach Bill Self.

For my money, the 1983 Houston Cougars and 1985 Georgetown Hoyas were the greatest college basketball teams of the 1980s.

And yet, neither program claimed the national title for these special years, which speaks to the winner-take-all beauty of the NCAA championship game.

We’ll address the fabulously talented Houston team later in the countdown; for now, though, let’s talk about the ’85 Hoyas:

**In today’s college game, no one could fathom a dominant center remaining in school all four years, especially coming off a championship the previous season.

And yet, Ewing was determined to carve out a legacy that included three Final Four berths and two championships.

But alas, it wasn’t meant to be.

**Villanova might have been an 8-seed in ’85. However, the Wildcats were a formidable foil to the Hoyas, losing two close meetings during the regular season.

As such, ‘Nova didn’t have any fear factor in playing Georgetown a third time … for all the marbles.

**Amazingly, Villanova shot 79 percent from the field in the title game (including 90 percent in the second half) … and won by only two points.

How did this happen? Well, Georgetown shot 55 percent from the field, a supreme number that doesn’t get much attention, 30-plus years later.

Bottom line: If the Hoyas had faced any other opponent in the final … they likely would have cruised to back-to-back championships.

Long before Michael Jordan became the greatest player in NBA history (debatable) and the most prolific pitchman in league history (not up for debate), he was a precocious and humble freshman for North Carolina.

For the 1981-82 season, Jordan was essentially the fifth wheel on a Tar Heels squad that featured future NBA talent (James Worthy, Sam Perkins) and solid veteran leadership (Jimmy Black, Matt Doherty) at the other four spots.

But as time marched on, Jordan slowly began to assert his dominance on the court. This amped-up hubris became in full view during the championship game (Louisiana Superdome) … and the final seconds.

The first half might have belonged to Georgetown freshman Patrick Ewing (four early goaltending calls, establishing himself as a rim-protecting menace) and UNC’s Worthy (game-high 28 points) … but it was Jordan’s over-the-top jumper that propelled North Carolina to its first championship of the Dean Smith era.

When Duke upended undefeated UNLV on Final Four Saturday in 1991, pulling off one of the greatest upsets in tournament history, many wondered if the championship game would be anti-climactic for the Blue Devils, given all the energy expended to get revenge on the Runnin’ Rebels (defending national champs).

Well, those fears quickly vanquished during the title game.

With Duke holding an early 5-1 lead, freshman Grant Hill rocked the basketball world with his are-you-kidding-me dunk off a Bobby Hurley pass that would have evaded the fingertips of every other human being walking the planet – minus Hill … and maybe Michael Jordan.

The 1987 Indiana Hoosiers enjoyed a storybook run to the NCAA crown, coinciding with Steve Alford’s brilliant senior campaign (the first year of the three-point shot in college) and Keith Smart’s emergence as one of the nation’s most accomplished two-way talents.

Smart might have been a defensive whiz for the Hoosiers, but his tourney legacy rests with collecting 21 points and six assists in the championship bout versus Syracuse, including the title-clinching jumper with four seconds left.

While the world expected Alford (23 points, seven triples that night) to take the last shot, it was Smart who boldly grabbed a handoff pass from IU forward Daryl Thomas and seemingly hung in the air forever … while posturing to bury the shot that would deliver Bobby Knight’s third national championship with Indiana.

Funny thing about this classic: Of the 147 combined points, the Syracuse and Indiana starting fives accounted for all but seven points.

Kris Jenkins participated in the ultimate give-and-go to help Villanova claim its first national championship in 31 years, the happy result of a perfectly executed full-court setup.

It’s easily one of the greatest plays in NCAA history.

Unfortunately, this long-distance gem (see above clip), sinking the hearts of North Carolina fans everywhere, cannot match the grandeur of the No. 1 buzzer-beater from Championship Monday.

The 1983 Houston Cougars might have been the most perfectly constructed team of the last 40 years, possessing depth, versatility, athleticism, experience and two future basketball Hall of Famers (Akeem Olajuwon, Clyde Drexler).

But on April 4, 1983, the night of the national championship game, the basketball gods had a different plan for the Cougars, who lost to NC State in heartbreaking fashion (54-52).

How painful was this defeat?

The final bucket (with the score tied) could have easily been a steal/breakaway dunk for Houston’s Benny Anders.

Instead, the late, great Lorenzo Charles was the lucky benefactor to the greatest airball in NCAA Tournament history.

On the TV side, we also owe CBS analyst Billy Packer a debt of gratitude for uttering the six greatest words in basketball-broadcasting lore: