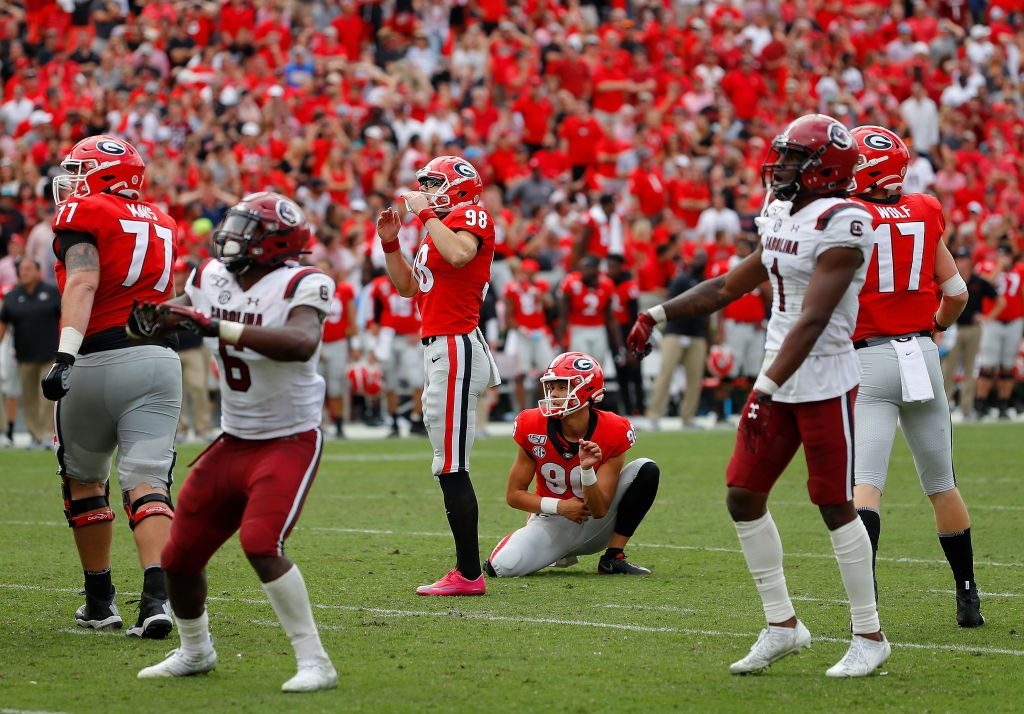 a) Tennessee and Arkansas have a near-zero shot of knocking off top-ranked Alabama over the next two weekends … just like the Crimson Tide have a 99.9999999-percent chance of maintaining the No. 1 spot prior to the mega-clash with No. 2 LSU (Nov. 9), which dutifully outlasted Florida on Saturday night.

b) Were the AP voters a little harsh with Georgia, dropping the Bulldogs seven huge spots in the countdown from a single loss?

Apparently not, when viewing this momentous defeat through the prism of South Carolina.

As in, if Georgia had previously been viewed as a juggernaut and viable College Football Playoff contender, and South Carolina had already posted a respectable showing versus Alabama a few weeks ago, then how come the Gamecocks didn’t crack the Top 25 after taking down the Dawgs in Athens?

Yes, South Carolina might only have a 3-3 record for the season; but after watching Saturday’s rough-and-tumble shocker, can anyone seriously claim the Gamecocks aren’t among the nation’s best 25 teams?

It’s not like UGA lost to Vanderbilt. The Bulldogs were a missed field goal away from forcing a second overtime; and if they had prevailed then, the Dawgs most certainly would have kept a top-4 ranking.

c) Can you name the biggest benefactor of the Georgia upset … outside of South Carolina coach Will Muschamp possibly securing a five-year contract extension in the span of a single afternoon?

The better answer: Oregon or Utah … provided these Pac-12 powers can stay in the cluster of elite-level programs with just one loss.

Prior to Saturday, the powerhouse cartel of Ohio State, Alabama, LSU, Georgia, Oklahoma and defending champion Clemson seemingly had a vise-like grip on determining the final Playoff field. As in, it would have been easy to pick and choose the entire foursome from this six-pack of battle-tested giants.

But alas, UGA’s defeat carves up a reasonable path for Playoff glory to Oregon or Utah (both 5-1), assuming either school can run the proverbial table from this point forward.

It won’t be easy, though: Oregon still has road trips to Washington (this Saturday), USC and Arizona State on the docket; and Utah must withstand a slippery slate of ASU, Cal and Washington (road) in the coming weeks.

And then, above all, the Ducks or Utes must win the Pac-12 title game … and in convincing fashion (read: 14 points or more).

d) Oklahoma has reached the good news/bad news/good news stage of its season:

GOOD NEWS, PART I: Fresh off its narrow victory over Texas, the Sooners should be prohibitive favorites for the final seven games of the regular campaign.

BAD NEWS: The Sooners need Baylor to remain undefeated up until their Nov. 16 clash. Otherwise, it’s difficult to envision Oklahoma rising up to the No. 1 or 2 spot in the AP poll — minus an unforeseen implosion at the top.

GOOD NEWS, PART II: Once again, with Georgia’s Saturday loss, we can eliminate the specter of the SEC getting two schools in the four-team Playoff. As a result, an undefeated Sooners squad would be certifiable locks to be a top-4 seed with the final Playoff rankings.

e) Feel free to clown on Minnesota’s Top 25 debut, characterizing the Golden Gophers as the ‘Wake Forest of the Big Ten.’

What does that mean? After knocking off Utah State, Rice, North Carolina, Elon and Boston College to the open the season, there were murmurs of the Demon Deacons being realistic challengers to Clemson in the ACC … that is, until Saturday’s home loss to Louisville upended that notion.

But don’t fall asleep on the school’s chances of contending for a New Year’s Day bowl.

The final four contests include three ranked programs (Penn State, Iowa, Wisconsin). If Minnesota can steal two games from that trio, along with beating rebuilding Northwestern on the road, the Gophers would be 10-2 and positioned nicely for either the Citrus or Outback bowls.

That’s a good place to be for only Year 3 of the P.J. Fleck regime.