BOLD PREDICTION: UCF will be the state of Florida’s highest-ranked Playoff team by season’s end 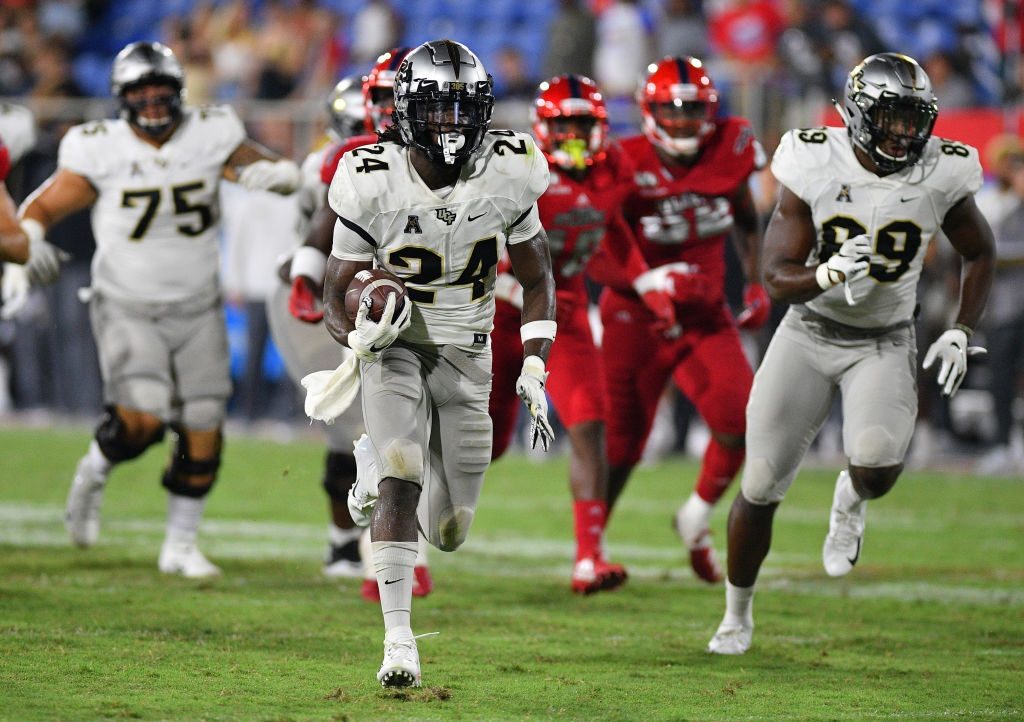 In the same year when Florida, Miami and Florida State all face one another, round robin-style, you’d think College Football Nation would have a clear understanding of the state of Florida’s best team for the 2019 campaign.

Especially when the Gators already possess victories over Miami, Kentucky and Tennessee … along with a No. 9 national ranking (Associated Press).

And yet, I’m not fully prepared to rubber-stamp the Florida Gators’ status as the unofficial state champion, even just days after UCF got upended by Pittsburgh on the road, 35-34.

In fact, I’m willing to bet UCF ends up with the highest College Football Playoff ranking of any Florida-based team by season’s end.

Here’s the blueprint for such a boast:

(At the time of this writing, we’re enjoying Dynamite Shrimp and Tempura Poppers from the P.F. Chang’s on Westshore Plaza in Tampa … so it makes perfect sense to be in such a Florida state of mind.)

The good news? The Gators can possibly afford to lose two games from the above fray and still secure a New Year’s Six bowl appearance (more on this later).

**UCF (3-1 overall) should have a pretty stable ride through American Athletic Conference play, minus the pressurized road trips to Cincinnati (Oct. 4) and Temple (Oct. 26). Outside of that, the Knights should average double-digit-point spreads for every other matchup on the regular-season docket.

In other words, despite Saturday’s defeat, No. 23 UCF remains the second-best Group Of Five team, and would be positioned to supplant Boise State as the GOF’s New Year’s Six representative, should the Broncos fall in the coming weeks.

Remember the old college football adage: If you’re going to lose just once during the regular season, ’tis better to do it in September.

**Miami (2-2 ovearll, 0-1 in ACC) gets a curiously timed bye this weekend, on the heels of a sluggish and close-shave home win over Central Michigan. For those scoring at home, this marks the Hurricanes’ second bye of the young season.

After the break, Miami will likely experience trouble with a five-game gauntlet that includes Virginia Tech, Virginia, Georgia Tech at home and back-to-back roadies with Pitt and Florida State.

Bottom line: Short of running the table here, the Hurricanes aren’t a sage pick for a New Year’s Day or major bowl.

**Florida State’s early-season struggles have been well-documented, losing late to Boise State and Virginia, and then averting outright versus Louisiana-Monroe, thanks to a missed PAT in overtime.

For the remaining slate, impending doom lies with three treacherous matchups against top-ranked Clemson (Oct. 12 on the road), Miami (Nov. 2) and Florida (Nov. 30 in Gainesville).

The above line isn’t a knock on Trask’s talent or character. By all , he seems like a great kid and a good program ‘face’ in Gainesville.

Instead, our so-called beef involves the strange revelation that — leading into last Saturday’s home rout of Tennessee — Trask hadn’t started a football game at quarterback since his freshman year … of high school.

Was it a freshman-team or JV game? Does it really matter?

OK, so Trask hails from a competitive preps program in Texas (Manvel HS), and had the unfortunate timing of sharing a graduating class with D’Eriq King — one of the most storied schoolboy quarterbacks in Texas history.

(King’s in the this week for taking a redshirt year at Houston … despite being the starter and reasonably healthy.)

And throughout his first three years with the Gators (2016-18), Trask toiled behind the likes of Luke Del Rio, Austin Appleby and Feleipe Franks — Florida’s training-camp starter who incurred a season-ending ankle injury versus Kentucky.

Which brings us to the present: Trask lit up the Tennessee defense last week for 293 yards passing (20 of 28) and two touchdowns, as part of the Gators’ 34-3 blowout win.

The victory certainly looks solid on the unheralded passer’s resume, but will this propel Trask to greater heights against 7th-ranked Auburn, No. 4 LSU and 3rd-ranked Georgia in the coming weeks?

That’s a lot of inexperience to overcome in such a short time window.

For years, UCF officials had been begging a non-Florida-based Power 5 program to visit Orlando … and the Knights proved to be the most unwelcoming of hosts, rolling for 28 first-quarter points against the Cardinal.

But reality became a cruel mistress the following week, with UCF falling behind Pitt by 21 in the first half and subsequently being showered by chants of “OVER-RATED” by those wearing blue and gold at .

By all indications, UCF’s three-year mission of garnering elite-level respect had crumbled in one awful 24-minute exhibition. But alas, the Knights forged an incredible rally, posting 31 unanswered points and momentarily submitting an early nomination Comeback Victory Of The Year.

OK, so UCF ended up squandering the lead and losing in gut-wrenching fashion; and roughly 14 hours later, UCLA pulled off the greatest rally of September, overcoming a 32-point deficit on the road versus Washington State.

(The astronomical final tally: 67-63 … without the help of a single overtime session.)

But if such a thing exists with Group Of Five programs, there are good losses on the road; and the Knights — who have won their last 13 home games by an indomitable margin of 26.1 points — needed to demonstrate their mettle away from the friendly confines of Spectrum Stadium.

THE POLITICS OF DANCING (IN JANUARY)

With all due respect to my beloved Big Ten (Michigan State grad … lifelong Big Ten apologist), the SEC empirically has the most loaded conference this season. Heck, maybe even the Pac-12 deserves kudos as the No. 2 league in 2019 (the referees have certainly played their part).

Which begs the question: Will the SEC have enough cachet in December to collect four bids to the New Year’s Six bowls (Peach, Fiesta, Rose, Sugar, Cotton, Orange) — similar to last year’s special quartet of Alabama, UGA, LSU and Florida?

With five SEC clubs currently ranked in the AP top 10, this certainly seems like a doable occurrence.

But ay the rub: Among Alabama, LSU, Georgia, Auburn and Florida … only the Gators and Bayou Bengals have three games against the other Big Four; and there’s zero chance of the College Football Playoff committee letting all five SEC teams into the New Year’s Six’s lot of bowls.

The likely tiebreaker, since the Gators and Bayou Tigers are stuck in crossover purgatory, unlike Alabama … which draws an easy-peezy date with Tennessee every fall: