BOWL PROJECTIONS: Does the Pac-12 champ now have a clear shot at the Peach Bowl? 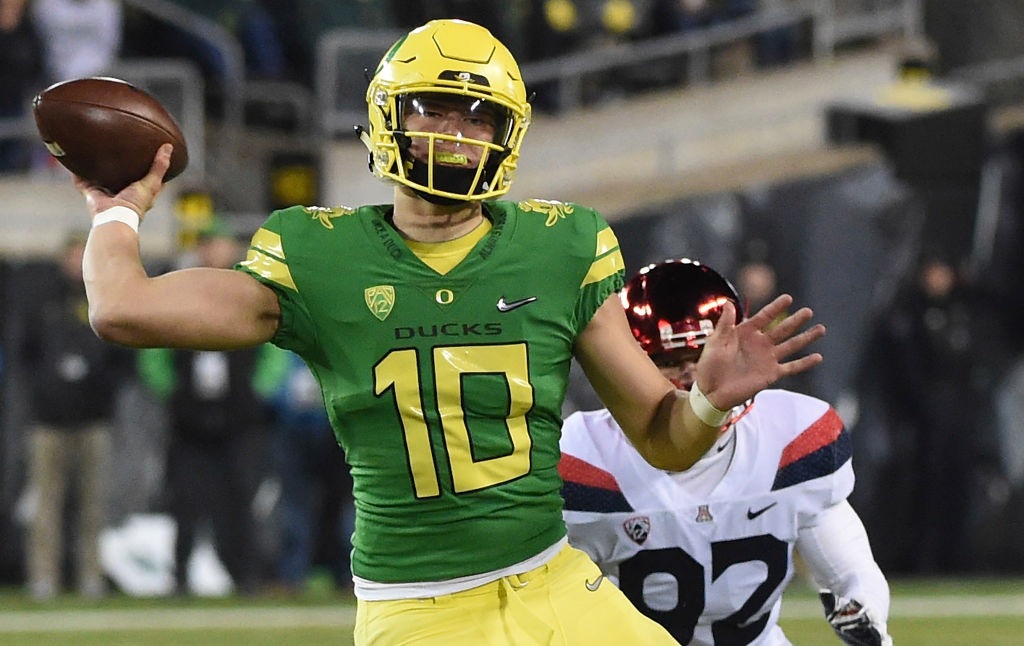 BATSBY Sports shall attempt to cut through the noise and predict the matchups for the 19 most important games on the bowl calendar, even though two weeks of regular-season activity and one big Conference Championship Weekend remain on the docket.

Reminder: The Peach Bowl and Fiesta Bowl will serve as this year’s semifinal destinations for the College Football Playoff, which released its second rankings last week.

What about the other 25-30 bowls? Ask yourself, do you really care who’s slated to make the Tropical Smoothie Cafe Frisco Bowl or Bad Boy Mowers Gasparilla Bowl in mid-November?

TAKE #1
Let’s start with the final piece of the College Football Playoff puzzle:

Assuming Oregon (No. 6 in current AP poll) and No. 7 Utah (nation’s No. 4 scoring defense) keep winning in November, the Dec. 6 winner of the Pac-12 title game should be a comfortable shoo-in for the No. 4 slot in the final Playoff rankings.

**Oregon (average victory margin during nine-game streak: 27 points) and Utah (held eight of 10 opponents to 17 or fewer points) both have strong seasonal resumes, including the respective lone defeats to Auburn (neutral field) and USC (away).

**No. 5 Alabama would lose out on the ‘optics’ argument twice, even with the presumption of beating Auburn in the season finale:

The Crimson Tide wouldn’t be playing for the SEC championship (Dec. 7 in Atlanta), and they won’t have quarterback Tua Tagovailoa (season-ending hip injury) from this point forward.

**Oklahoma deserves major props for its staggering comeback victory over Baylor Saturday night, rallying from a 28-3 deficit to collect the 34-31 win in Waco.

But ay the rub: Even if the Sooners beat the Bears again in the Big 12 title game (Dec. 7 in Arlington, Texas) … that victory wouldn’t match the clout of handling Baylor the first time — as an undefeated entity.

TAKE #2
No one can match LSU’s seasonal resume of top-10 wins over Florida, Auburn and Texas … along with the titanic road victory over No. 3 Alabama (Nov. 9).

Throw in a hypothetical victory over No. 5 Georgia in the SEC title game, and LSU’s full profile (strength of schedule/opponent, perfect record) should be enough to earn the No. 1 overall seed for the four-team Playoff.

And that’s crucial this year, since LSU and Ohio State would likely prefer playing in Atlanta (Peach Bowl) over Arizona (Fiesta Bowl), especially if the opponent hails from the Pac-12 region (the aforementioned Utah or Oregon).

Yes, we currently have the No. 9 Nittany Lions slotted for the Citrus Bowl (versus Auburn), but PSU still has its its major goals in play:

a) Upending No. 2 Ohio State this Saturday.

b) Routing Rutgers the following weekend to clinch the Big Ten East crown.

c) Beating Minnesota or Wisconsin for the conference championship (Dec. 7 in Indianapolis).

Look, no one’s doubting that Ohio State (No. 1 nationally in scoring offense and scoring defense) should be prohibitive favorites over Penn State in Columbus.

However, if the Nittany Lions can summon all their strength and positive mojo, thus forging the upset of the year, the requisite weight of such a monster victory would seemingly vault Penn State over the likes of Alabama, Oregon, Utah, Oklahoma and even Georgia (Playoff rankings).

TAKE #4
As predicted, Clemson (11-0 overall) has handled its perceived snub from the inaugural Playoff rankings with controlled anger and brutal force … subsequently pounding its overmatched ACC brethren into submission.

The first victim, post rankings (Nov. 9): Clemson rolled to a 28-0 lead at NC State after just one quarter and cruised to a 55-10 smackdown victory.

The second piece of cannon fodder: The Tigers allowed a first-quarter field goal to previously ranked Wake Forest, before methodically rolling to a 52-3 home victory.

The only lingering question here: Hypothetically, let’s say LSU and Ohio State fall before Dec. 8, would the Playoff committee award Clemson with the No. 1 overall seed, even though the ACC has been marginal-at-best this season?

a) Clemson would have followed up its national-title-winning season with a spotless record, with the only wart being the uncomfortably tight win against North Carolina back in September.

b) The Tigers’ non-conference slate of South Carolina (beat Georgia in October) and Texas A&M still holds up relatively well, compared to most schools in the top 10.

**Assuming Georgia can hang tough with LSU in the SEC title game, the Dawgs seem like a good bet to represent the conference in the Sugar Bowl.

Of course, Alabama might merit that same chance, given two factors:

a) The Crimson Tide would presumably own the higher Playoff ranking on Dec. 8, if Georgia became a two-loss team.

b) Bowl officials are always nervous to have repeat representatives in consecutive years. Case in point: Georgia fell to Texas in last season’s Sugar Bowl.

**Florida gets the Orange Bowl nod for a similar reason listed above: The committee would like to avoid a Georgia-Notre Dame rematch from September.

**If the SEC truly wants a fourth team in the New Year’s Six system, then league officials must also accept the lose-lose proposition of facing the Group Of Five representative — Memphis, according to our projections.

What makes it a lose-lose? If Alabama takes care of business, then Nick Saban and Co. wouldn’t get much extra credit with the national audience/pundits.

However, if the Crimson Tide put down a clunker, and ended up losing to an American Athletic Conference program (gasp!!!!) … there would be hell to pay with Alabama’s passionate and sometimes-misguided fan base.