BOWL PROJECTIONS: Will Ohio State or LSU get the plum No. 1 Playoff spot in Atlanta? 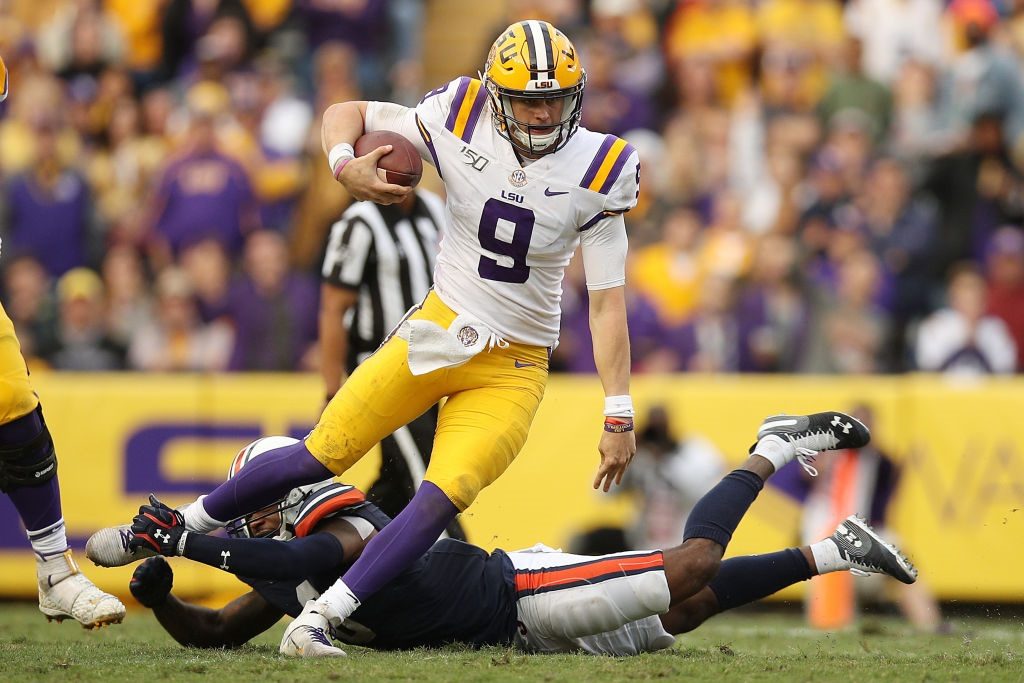 BATSBY Sports shall attempt to cut through the noise and predict the matchups for the 17 most important games on the bowl calendar, even though three weeks of regular-season activity and one big Conference Championship Weekend remain on the docket.

Reminder: The Peach Bowl and Fiesta Bowl will serve as this year’s semifinal destinations for the College Football Playoff, which released its initial rankings last week.

What about the other 25-30 bowls? Ask yourself, do you really care who’s slated to make the Redbox Bowl or First Responders Bowl in early November?

TAKE #1
Ohio State’s chances of claiming the overall No. 1 seed after Conference Championship Weekend — despite currently owning the top spot in the Playoff rankings — took a sizable hit on Saturday, even though the Buckeyes mauled Maryland by 59 points.

Instead of relying on an undefeated and top-3 showdown with Penn State in a few weeks, Ohio State’s hopes of collecting a major-impact victory in November/December now rest with potentially encountering an undefeated Minnesota squad in the Big Ten title game.

If that should happen, then the surprising Golden Gophers (9-0 overall, 6-0 in Big Ten; No. 7 in the latest AP poll) would likely boast a top-5 Playoff ranking, in advance of the Dec. 7 championship bout in Indianapolis.

However, Minnesota (fresh off its landmark win over Penn State), which has a two-game lead in the Big Ten West, still needs a two-of-three combination of handing Iowa (road), Northwestern (road) and Wisconsin to secure the division title.

And anything short of going 3-0 during this stretch would ultimately hinder Ohio State’s Strength of Opponent quotient with the Playoff committee, even though the Buckeyes still have two substantial opponents on the schedule — Penn State (No. 9 in AP, after Saturday’s loss) and No. 14 Michigan.

TAKE #2
If the above text seems ripe with mixed messages, here’s something that should be crystal-clear to college football fans around the country:

No one can match LSU’s seasonal resume of top-10 wins over Florida, Auburn and Texas … along with Saturday’s titanic road victory over No. 3 Alabama.

Throw in a hypothetical victory over No. 5 Georgia in the SEC title game, and LSU’s full profile (strength of schedule/opponent, perfect record) should be enough to earn the No. 1 overall seed for the four-team Playoff.

And that’s crucial this year, since LSU and Ohio State would likely prefer playing in Atlanta (Peach Bowl) over Arizona (Fiesta Bowl), especially if the opponent hails from the Pac-12 region (either No. 6 Oregon or No. 8 Utah).

TAKE #3
Utah and Oregon owe the good people of Baton Rouge and Minneapolis debts of gratitude this week, due to Alabama and Penn State falling on the same Saturday.

The significance of the top-5 upsets? Well, as long as the Utes and Ducks remain on a collision course for the Pac-12 title game — as one-loss warriors — the conference would ostensibly be locks to place its league champion in the four-team Playoff.

Of course, some (or many) might argue that Alabama (as a hypothetical one-loss, non-championship squad) would beat Oregon and/or Utah on a neutral field in late December; but that shouldn’t really matter in 2019, since the Crimson Tide’s non-conference schedule and conference slate were tangibly underwhelming.

(For example, if LSU and Georgia meet in the Dec. 7 championship, it would mean the Tigers played the other four SEC teams ranked in the top 11 … whereas Alabama would only square off against two of the four.)

Is that fair, since Alabama doesn’t control its conference slate? Perhaps not. But if a one-loss, highly rated Pac-12 champion cannot reach the Playoff this season — even with an eminently clear path to the Peach or Fiesta bowls — then why even have a four-team Playoff?

Also, why not extend this great tournament to six or eight teams? After all, the Pac-12 hasn’t garnered Playoff representation since the 2016 campaign (Washington).

TAKE #4
Just as we anticipated the other day, Clemson handled its perceived snub from the inaugural Playoff rankings with controlled anger … and subsequently pounded its overmatched ACC brethren into short-time submission.

Saturday’s victim: Clemson rolled to a 28-0 lead at NC State after just one quarter and cruised to a 55-10 smackdown victory.

The only lingering question here: Hypothetically, let’s say that both LSU and Ohio State fall before Dec. 8, would the 13-member Playoff committee award Clemson with the No. 1 overall seed, even though the ACC has been marginal-at-best this season?

Here are three quick reasons why this could easily happen:

a) Clemson would have followed up its national-title-winning season with a spotless record, with the only wart being the uncomfortably tight win against North Carolina back in September.

b) The Tigers’ non-conference slate of South Carolina (beat Georgia in October) and Texas A&M still holds up strong, compared to most schools in the top 10.

c) The Playoff committee might enjoy pitting LSU and Ohio State against one another in the semifinals, as hypothetical one-loss champions.

TAKE #5
Minnesota potentially capturing the Big Ten championship and qualifying for the four-team Playoff would easily be the story of the year in college football.

But at this time, even amid the afterglow of the Penn State shakedown, we prefer to contemplate more plausible options involving the Golden Gophers.

Such as … if Minnesota can go 2-1 or 3-0 for the final stretch (mentioned in Take #1), that should be enough to propel the Golden Gophers to their first Rose Bowl berth since January 1962 — presuming a loss to Ohio State in the Big Ten title game.

TAKE #6
The NFL won’t have a Monday Night Football broadcast for Week 17; but a hypothetical Orange Bowl clash of Penn State and Notre Dame would certainly generate a prolific TV rating, in the same time window as MNF.

Of course, it’s also important to emphasize the following: Penn State still has a decent shot at making the four-team Playoff … and in some perverse way, the Nittany Lions might have improved their chances of landing a top-4 seed on Dec. 8.

How is this possible?

For Step 2 of this scenario, the Nittany Lions then get revenge on 11-0 Minnesota in the conference championship game.

The combination power of seizing the Big Ten crown and beating a pair of top-5 foes in 15 days’ time would likely be enough to leverage Penn State into the Playoff, perhaps possessing a better case than Alabama, Georgia and the Oregon/Utah loser, should the two one-loss schools meet for the Pac-12 championship.