CFB PLAYOFF: Projecting the top 10 teams, in advance of the Nov. 5 early rankings 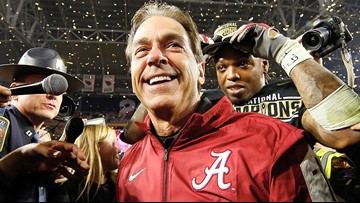 For the next seven Tuesdays, BATSBY Sports shall walk the plank of potential embarrassment … by projecting the College Football Playoff rankings.

And in case you aren’t aware, the inaugural Playoff rankings become public on Tuesday, Nov. 5.

It’s worth noting: Our projections will only focus on the next batch of CFP rankings. In other words, we won’t be making a case for the final foursome … until maybe late November.

**The top-ranked Crimson Tide have hardly been threatened in the first seven games, posting an average victory margin of 32 points.

**Quarterback Tua Tagovailoa (2,166 yards passing, 29 total TDs, 2 INTs) has quickly emerged as a Heisman Trophy favorite. However, the injured southpaw (high-ankle sprain) likely needs to return for the LSU showdown on Nov. 9 to merit being a finalist for New York City.

**Alabama’s statistical dominance might not match that of previous seasons (an unfair comparison, for sure), but it’s still excellent across the board.

**The Crimson Tide’s slate has been decent to date (road wins over South Carolina, Texas A&M), but strength of schedule won’t be a concern in November, with Alabama encountering No. 2 LSU and No. 9 Auburn on the road.

**LSU might have the best resume for a No. 1 ranking, collecting road wins over Texas, Mississippi State and outlasting Florida at home (Oct. 12), the season’s most exhilarating clash, among heavyweights.

However, until the Tigers can formally get revenge on the Crimson Tide for last year’s 29-0 whitewashing … it’s hard to see the 13-person CFP committee choosing LSU over Alabama.

**Quarterback Joe Burrow has brought the LSU offense out of the Stone Age, unleashing a vertical-strike attack that already entails a single-season school record with passing touchdowns (29).

**LSU can add another notch to its case for being No. 1 with a convincing win over Auburn this weekend. (On the other hand, the Tua-less Crimson Tide will encounter lowly Arkansas and then a bye over the next two weekends.)

**Check out these national rankings covering offense and defense. The Tigers are on a certifiable roll … and potentially have the requisite balance to beat Alabama.

The proverbial Eye Test tells us the Buckeyes — average victory margin: 41.7 points — should be ranked No. 1 in the nation.

However, the Buckeyes likely won’t make another dent in the national rankings until the Alabama-LSU showdown on Nov. 9.

Ohio State hasn’t been challenged by any heavy hitters to date; and even Saturday’s clash with No. 13 Wisconsin has lost some luster, in lieu of the Badgers’ stunning upset at the hands of previously downtrodden Illinois.

And before you know it, the season-ending monster matchups with No. Penn State (home) and No. 19 Michigan (road) will be here.

The Tigers don’t necessarily look like the fourth-best team in the nation, as the last-second victory over North Carolina (Sept. 28) might suggest.

However, the Eye Test might be irrelevant to the CFP committee, when observing Clemson in the following prism:

**Tigers QB Trevor Lawrence (the presumptive No. 1 overall pick in the 2021 NFL Draft) remains a top TV draw — something which should never be underrated, when determining the four semifinalists.

**Who could resist the charm of Alabama and Clemson meeting in the College Football Playoff for five consecutive years?

Oklahoma has reached the good news/bad news/good news stage of its season:

GOOD NEWS, PART I: With Texas in the rear-view mirror (for now), the Sooners should be prohibitive favorites for the final five games of the regular season.

BAD NEWS: Oklahoma needs No. 14 Baylor to remain undefeated up until the schools’ Nov. 16 clash in Waco. Otherwise, it’s difficult to envision OU (via strength of schedule) rising up to the No. 1 or 2 spot in the first CFP poll — minus an unforeseen implosion at the top.

GOOD NEWS, PART II: Factoring in the Georgia and Florida defeats from earlier this month, we can ostensibly eliminate the specter of the SEC getting two schools in the four-team Playoff.

**Fresh off back-to-back victories over ranked opponents (Iowa, Michigan), you’d think Penn State’s schedule would ease up in the coming weeks; but that’s hardly the case, with three road tilts (at Michigan State, at No. 17 Minnesota, at No. 3 Ohio State) coming up over the next five Saturdays.

The upside here: An undefeated Nittany Lions squad (including a Big Ten title-game victory) would easily cruise into a top 2 or 3 seed in the four-team Playoff.

**The statistical categories say it all about unblemished Penn State:

**The Gators warrant major props for beating Auburn, losing to LSU and then rallying for a crazy road victory over South Carolina over three Saturdays.

Very few schools could weather a 14-day stretch like that; and as a result, we’re aligned with the Associated Press poll (No. 7 overall).

**With Georgia, Missouri and Florida State remaining on the schedule, along with the hypothetical berth in the SEC title game, a one-loss Florida squad would have a 99.9-percent chance of reaching the four-team Playoff as the SEC champion.

**We could debate the (un)fairness of Auburn having Oregon, LSU, Florida, Georgia and Alabama on its schedule all day long, but here’s the reality of the situation:

The Tigers cannot afford another loss — namely this Saturday’s road clash with LSU — and be plausible contenders for the national semifinals.

**It’s worth noting: Just two years ago, Auburn incurred two early losses (Clemson, LSU) and still temporarily rallied for a top-4 Playoff ranking, after knocking off Georgia and Alabama in consecutive games; and had they beaten UGA in the rematch (SEC title game), the Tigers would have advanced to the national semifinals.

However, in that case, Georgia and Alabama were ranked No. 1 at the time of each Auburn upset. Right now, the one-loss Dawgs have little to no chance of owning the top spot before they face the Tigers in November.

**We had zero interest in denying the Ducks a spot in the top 10, even though the school currently resides at No. 11 in the AP poll.

**Oregon has been exceptional in its last six outings, enjoying an average victory margin of 29 points and knocking off Stanford and Washington on the road in league play.

**The season-opening defeat to Auburn was initially devastating to Oregon’s Playoff hopes, since the Pac-12 hasn’t been particularly strong in recent years.

However, the six-week winning streak, along with huge road trips to USC and Arizona State, could potentially put the Ducks within shouting distance of the semifinals, in advance of Conference Championship Weekend.

In that case, to maximize its chances of impressing the CFP committee, Oregon would likely need a one-loss Utah team (currently 12th in the AP) to reach the Pac-12 title game.

**Quarterback Justin Herbert (a potential top-10 pick in next year’s draft) gets all the national press, but don’t fall asleep on the Oregon defense, which owns elite-level rankings with turnover margin (4th nationally), scoring defense (7th) and total defense (7th).

**Georgia hasn’t looked uber-dominant in recent weeks, losing to South Carolina at home and then posting a sluggish shutout of Kentucky in a downpour.

The Dawgs would still be healthy locks to reach the four-team Playoff if they run the table from here, presuming signature victories over Florida (Jacksonville), Missouri, Auburn (road), Texas A&M and then either Alabama, LSU or Auburn in the SEC title game.

Bottom line: A one-loss SEC champion would only get booted from the semifinals, if the other conferences produced four undefeated champions.

**Notre Dame has a higher ranking in the Associated Press poll. However, if there were an apples-to-apples comparison for the Playoff Committee to consider, Georgia would prevail on the basis of its head-to-head win back in September.