CFB PLAYOFF REACTION: The Utah-or-Oklahoma debate will finally come to a head during championship weekend 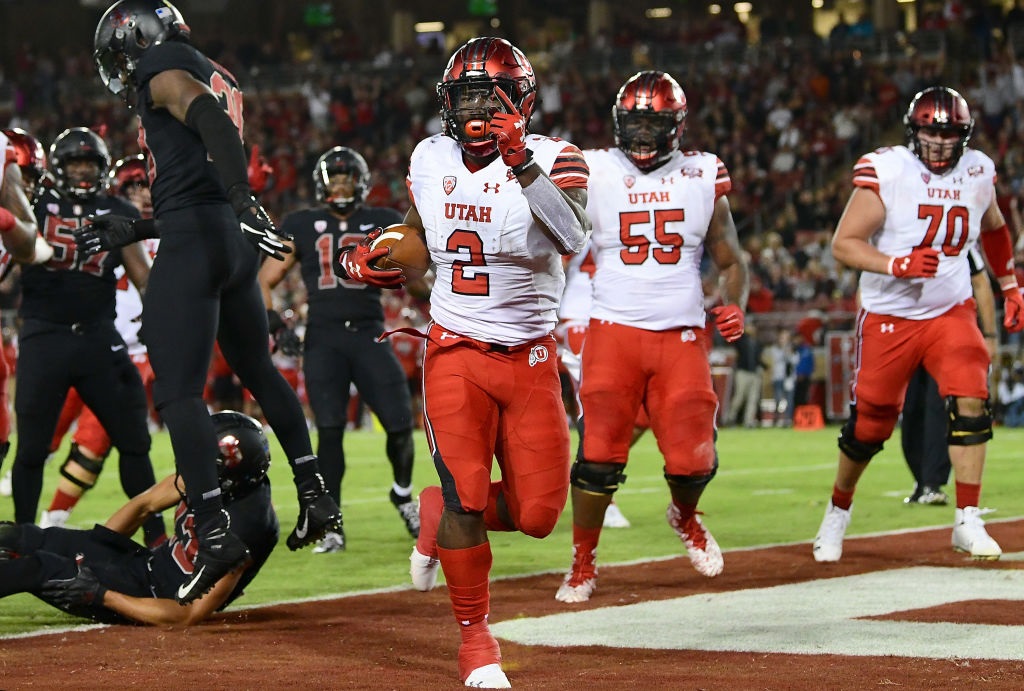 The fifth set of College Football Playoff rankings are now available for public consumption, much like the delectable Western BBQ Burger or Original Buffalo Chicken Sandwich from your local Hooters restaurant (location finder).

TAKE #1 — Conference Championship Saturday might have an anti-climactic feel, if No. 5 Utah decisively carries the Pac-12 title Friday night

Let’s open with a hypothetical:

If Utah handles No. 13 Oregon by a comfortable margin, say 10-20 points, it might be darn-near implausible for the 13-member Playoff committee to deny the Utes a spot in the Peach Bowl (as the No. 4 seed) — assuming No. 2 LSU takes care of business versus Georgia the following day.

a) The Pac-12 championship has no TV competition on Friday night, meaning the committee will undoubtedly give the Oregon-Utah clash their full attention.

b) With two notable exceptions (close road loss to USC, tight road win over Washington), no other foe on the Utah schedule finished any closer than 18 points.

As for Oklahoma, from Oct. 26 to Nov. 23, the Sooners’ 3-1 record against Kansas State, Iowa State, Baylor and TCU all involved final spreads of seven or fewer points.

Of course, this whole Utah vs. Oklahoma conundrum won’t amount to a hill of beans … if Georgia somehow knocks off LSU in Saturday’s SEC championship.

Within that scenario, the SEC would be a lock for two Playoff teams — at the likely expense of the Pac-12 and Big 12.

The Playoff committee certainly understands the need for extra drama in early December.

With No. 7 Baylor and No. 8 Wisconsin safely listed above Florida (No. 9) and Penn State (No. 10), the top eight teams all control their respective destinies for Conference Championship Weekend.

And as part of that, all eight possess at least a sliver of a chance for making the national semifinals on Sunday afternoon, when all the bowl matchups become public.

So, let’s address the 6 through 8 seeds, in reverse order:

WISCONSIN: The Badgers would need to upend Ohio State in the Big Ten title game (preferably by two touchdowns) … and then hope for LSU, Clemson, Baylor and Oregon to prevail in the SEC, ACC, Big 12 and Pac-12 championships.

OKLAHOMA: Handle Baylor for a second time this season, without incident … and then plausibly hope for LSU, Clemson, Ohio State and Oregon to take care of business.

Last week, Coach Swinney went on a tongue-in-cheek rant to the South Carolina-based media, claiming the CFP committee wanted Clemson “voted out” of the four-team Playoff, in favor of Georgia.

What made this media so interesting … and vexing?

Well, Clemson and Georgia might be ranked third and fourth in the penultimate Playoff listing, but the two schools’ cases for making the Peach Bowl or Fiesta Bowl are mutually exclusive, meaning that one’s inclusion has nothing to do with how the other fares on Saturday.

Simply put, whether Clemson (12-0 overall, 10 victories of 31-plus points) beats Virginia by one or 100 points in the ACC title game, the Tigers would still be automatic entrants for a top-3 seed.

And even with Alabama’s stunning loss to Auburn, Georgia (11-1 overall) must still defeat LSU to realistically garner a spot in one of the national semifinals.

In fact, even if the Dawgs suffered a crushing, yet highly competitive loss to the Tigers (No. 1 in the AP poll) — similar to last year’s SEC championship versus ‘Bama — a two-loss UGA squad would still have minimal chance of sticking at No. 4.

That same rationale doesn’t apply to LSU. With four top-10 victories on the resume (Alabama, Auburn, Florida, Texas), the Tigers are easy locks for Atlanta or Phoenix in the final week of December.

On the flip side … Swinney raises an interesting point when lamenting Georgia’s current standing with the CFP committee.

COMMON OPPONENTS: Clemson went 2-0 vs. South Carolina and Georgia Tech, with a robust cumulative score of 90-17. Georgia, in turn, posted a 1-1 record with the same competition, routing the Yellow Jackets (on Saturday) … but falling to the Gamecocks at home in overtime (back in October).

INDIRECT COMMONALITIES: Way back on Aug. 31, North Carolina forged a late rally to knock off South Carolina on a neutral field.

CONFERENCE STRENGTH: By most metrics, the SEC had a better national profile than the ACC this season. However, 10 ACC schools notched intra-league records of .500 or better … whereas the SEC merely had eight programs within the same category.

BOTTOM LINE: Let’s be honest here. It certainly looks like the Playoff committee quietly treated Clemson’s harrowing one-point win over North Carolina — thanks to the Tar Heels’ botched two-point conversion at game’s end — like a loss.

As such, to use a term from the classic college comedy, Animal House, whether Coach Swinney knew it or not … his Tigers have apparently been on ‘double-secret probation’ since that Carolina close shave.