Share on facebook
Share on twitter
Share on linkedin
Share on whatsapp
Quarterback Jake Fromm and the No. 6 Georgia Bulldogs (7-1 overall) control their destiny for winning the SEC East crown. The outlook would be similarly stellar for the four-team College Football Playoff, if the Dawgs were sporting a 12-1 record and conference title in early December. 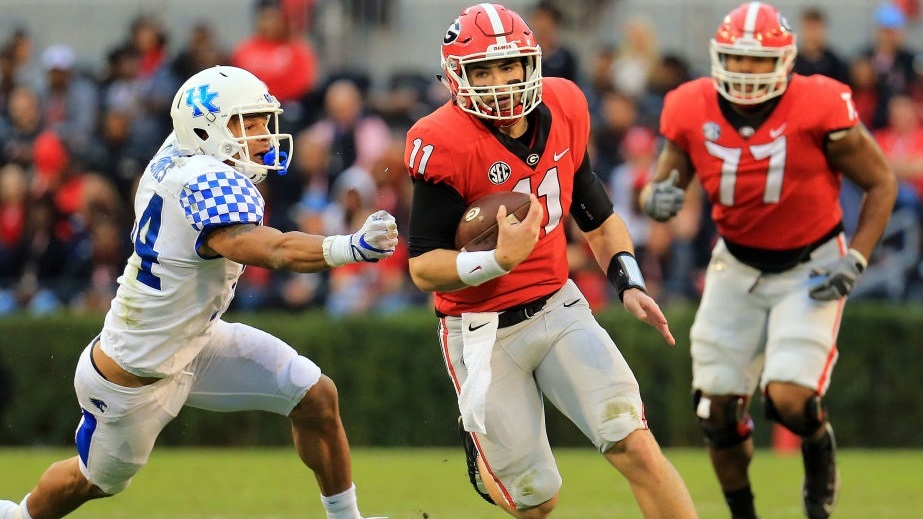 a) The Crimson Tide survive this year’s Game Of The Century with top-ranked LSU on Saturday, even if ‘Bama QB Tua Tagovailoa (ankle injury) cannot operate at peak efficiency.

b) Even if No. 2 Alabama falls to Auburn on Thanksgiving weekend, a win over LSU would ostensibly punch the Crimson Tide’s ticket for Atlanta — due to head-to-head tiebreaker rights … and Auburn already having two conference defeats (@ LSU, @ Florida).

That aside, we cannot envision two losses out of this three-pack of intra-conference clashes. Hence, the immense value of owning the head-to-head tiebreaker over Florida (4-2 in the SEC).

a) It’s a simple proposition for the East:

The Penn State-Ohio State winner (Nov. 23) should be a shoo-in for the division crown, regardless of how the No. 5 Nittany Lions fare against No. 13 Minnesota this Saturday … or how the No. 3 Buckeyes perform against surging Michigan on Thanksgiving weekend.

As a major bonus, the PSU-OSU winner, if still undefeated in a few weeks, would be heavy favorites to secure the No. 2 seed in the four-team College Football Playoff.

b) Here’s something else to consider: If the Penn State-Ohio State game ends up a thrilling, last-second classic, the loser of that heavyweight battle could still be viable candidates for the four-team Playoff.

c) Things are murkier in the West, even though Minnesota (5-0 in Big Ten) boasts the school’s first 8-0 start since 1941 (national champions):

**The Golden Gophers currently have the upper hand in divisional play, but they also have a daunting finishing kick of No. 5 Penn State (home), No. 18 Iowa (road), Northwestern (road) and No. 16 Wisconsin (home).

**Iowa (3-2) and Wisconsin (3-2) obviously need extra help to claim the division title, but it’s hardly an implausible path to glory.

**For starters, the Hawkeyes and Badgers both get a crack at the Golden Gophers this month.

**If Iowa can upend Wisconsin this Saturday, the Hawkeyes could be tangible Vegas favorites for the final three outings — including Minnesota at home (next Saturday).

**If Wisconsin experiences the best of both worlds on Saturday — beating Iowa … and Penn State outlasting Minnesota — this could set up a winner-take-all scenario with the Golden Gophers on Nov. 30 (in Minneapolis).

a) Let’s face it: North Carolina had a great shot at knocking off Clemson on Sept. 28 (failed two-point conversion for the win).

For everybody else, though, the defending national champions haven’t been so gracious in the game-ending-drama department.

b) With all due respect to NC State and No. 22 Wake Forest, Clemson has too much mojo right now to experience a major letdown, thus falling out of the College Football Playoff picture.

c) You could make a robust case for five programs (Virginia, Pittsburgh, North Carolina, Miami, Virginia Tech) rising up and claiming the Coastal title this month.

However, we remain fascinated by UVa’s defense (surrendering 30 points only twice this season) … and the eerie notion of the Coastal producing six distinct division champions in six years — with the lone non-champion being Virginia.

In other words, the Cavaliers are due for a banner season.

d) Here’s why we’re betting on Virginia during the final weeks:

**The Cavaliers have three remaining games on the slate — all taking place in Charlottesville.

**UVa should have extra motivation against the Georgia Tech on Saturday, factoring in the Wahoo’s devastating last-second loss to the Jackets last November.

**At the same time, Virginia owes Georgia Tech a major debt of gratitude for knocking off Miami two weeks ago. As a result, UVa leads the Hurricanes by one full game in the Coastal standings.

a) Unlike the other major conferences, the 10-team Big 12 enjoys an all-encompassing system of round-robin play.

As such, the best two teams (including tiebreakers) qualify for the championship bout on Dec. 7 (AT&T Stadium in Arlington, Texas).

b) Baylor has everything to play for over the next four weeks:

**If the Bears can beat TCU (road), Texas (home) and Kansas (road), they’ll automatically qualify for the Big 12 championship, regardless of how the looming showdown with No. 9 Oklahoma shakes out (next Saturday).

**Going one step further, if Baylor can sail through the next four games, without a blemish, there’s a decent chance of the Bears avoiding a rematch with Oklahoma in the Big 12 title game.

**An undefeated Baylor would be a prime candidate for the four-team Playoff, especially if Oklahoma or Kansas State entered Conference Championship Saturday ranked in the top 15 nationally.

At this point, only the ACC, SEC and Big Ten could have spotless champions … leaving the fourth and final spot open to the most deserving program.

a) No. 7 Oregon stands as the only defeated team in conference play. As such, the Ducks already possess head-to-head tiebreakers over Stanford, Washington and California.

b) Even if Oregon State knocks off Oregon in the season finale (Nov. 30), the Beavers (two Pac-12 losses) would still need the Ducks to lose to Arizona (home) or Arizona State (road) in previous weeks; and given Oregon’s thorough dissection of USC (Saturday), it’s hard to envision an upset of epic proportions.

c) Oregon has motivation to play great every week: A 12-1 record (including the Pac-12 title) might be enough for the Ducks to reach the four-team College Foootball Playoff.

d) Utah has been on a certifiable roll since falling to USC, producing consecutive blowouts over Washington State, Oregon State, Arizona State, California and squeaking out a quality victory at Washington.

On paper, the Utes’ finishing kick of UCLA (Nov. 16), Arizona and Colorado doesn’t seem so bad; but let’s remember the following:

The Bruins, even with an overall record of 4-5, only have two Pac-12 defeats … and still control their destiny for the division crown.

Plus, Utah cannot afford a tie-breaking situation with USC (4-2 in conference), given its head-to-head defeat to the Trojans wayyyyyyyy back in September.

BEST OF THE REST