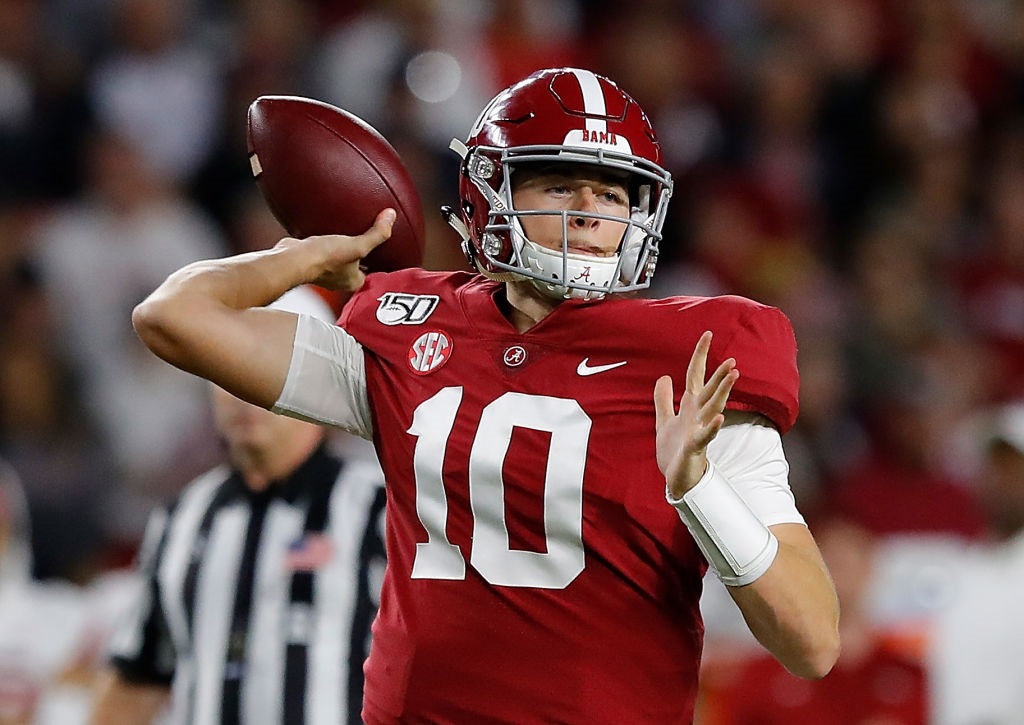 However, something big still stood out from the ESPN broadcast:

Even with Heisman Trophy favorite Tua Tagoviloa being shelved with a season-ending hip injury, the 13-member Playoff committee still holds the Crimson Tide (also No. 5 in the Associated Press poll) in high esteem.

Perhaps for the long haul, as well.

As such, there exists a small handful of eminently plausible paths for Alabama collecting the No. 4 seed on Dec. 8 and subsequently spoiling the Playoff hopes of the Pac-12, Big 12 … and maybe even the Big Ten.

Here’s a detailed look at how Alabama can pull off this major undertaking, without their dynamic quarterback or a clean shot at the SEC championship.

For the sake of argument, we’re also not expecting No. 3 Clemson to fail over the next three weekends, given the Tigers’ annual stronghold over South Carolina (regular-season finale) … and the weaker ACC Coastal Division winner.

Hypothetically, let’s say new quarterback Mac Jones leads Alabama to a pair of blowout victories over Western Carolina and Auburn … and then Oregon claims the Pac-12 title over Utah on Dec. 6.

On paper, the Ducks would have the edge on two fronts:

**The bonus-point structure of securing a league title from a Power 5 conference.

**The high impact of knocking off a top-7 team (Utah) on the season’s final weekend, compared to Alabama sitting home on Conference Championship Weekend.

Conversely, here’s how Alabama would own this apples-to-apples comparison:

**From a common-opponents standpoint, Oregon fell to Auburn … and Alabama — as part of this hypothetical — convincingly handled the same Tigers on the road (Thanksgiving Saturday).

**At this moment, Alabama has a higher Strength Of Schedule quotient, among national teams, than Oregon.

Let’s be honest: Even if the SEC deserved three schools in the four-team Playoff, it would never fly with the committee — given the political backlash that would surely accompany such a landmark decision.

(No more than two same-conference schools have reached the Playoff in a single year.)

With that in mind, Alabama would need No. 4 Georgia to lose its SEC title-game shot versus top-ranked LSU (Dec. 7 in Atlanta), eliminating the Dawgs from further consideration for the national semifinals.

Simply put, LSU (top-10 victories over Texas, Auburn, Florida, Alabama) boasts the best seasonal resume in college football; and as long as the Tigers (remaining games: Arkansas, Texas A&M at home) show up for the SEC title game with a spotless record, they’re essentially guaranteed to reach the Peach Bowl (Atlanta) or Fiesta Bowl (Arizona) — regardless of what happens against Georgia.

If Georgia beats LSU, however, the final Playoff rankings might resemble this educated guess:

In 1997, otherwise known as the final campaign before the old Bowl Championship Series became law in college football (1998-2013), Michigan and Nebraska shared the national championship, with the Wolverines prevailing in the AP poll … and the Cornhuskers carrying the Coaches’ poll.

Prior to that, however, Michigan had been relegated to the narrow role of dashing Ohio State’s national-title hopes, pulling off game-changing upsets in 1993, 1995 and 1996.

Given this quick history lesson, the folks in Alabama should be cheering for another Michigan awakening, when the Wolverines and Buckeyes lock horns on Thanksgiving Saturday (in Ann Arbor).

It’s a simple proposition: No. 13 Michigan (6-1 since Sept. 28, with only a close road defeat to Penn State during this span) must upend No. 2 Ohio State.

On the surface, the above statement reeks of fallacy, since Ohio State also has major-implication matchups with Penn State (Saturday in Columbus) and the Big Ten title game (Dec. 7 in Indianapolis, assuming the Buckeyes earn the berth) on the docket.

a) If Penn State takes down Ohio State, the Nittany Lions (No. 8 in the latest Playoff poll) would ostensibly clinch the Big Ten East and a spot in the conference championship. The grandeur of such a major upset might also vault PSU into the top-4 of next week’s Playoff rankings.

And a victory over Minnesota (No. 10 Playoff ranking) or Wisconsin (No. 12) would surely be enough for Penn State to secure a Peach Bowl or Fiesta Bowl bid.

If Minnesota can somehow defeat Wisconsin (for the Big Ten West crown) and Ohio State on consecutive weekends, the impact of this hypothetical, yet glorious finish would likely catapult the Golden Gophers into their first-ever Playoff.

c) If Ohio State won the Big Ten East but entered the league championship with one loss (to Michigan), that might weaken the Buckeyes’ Playoff resume enough … to sneak the Crimson Tide in through the back door.

PrevPreviousBOWL PROJECTIONS: Does the Pac-12 champ now have a clear shot at the Peach Bowl?
NextFANTASY FOOTBALL: Early positional rankings for NFL Week 12Next