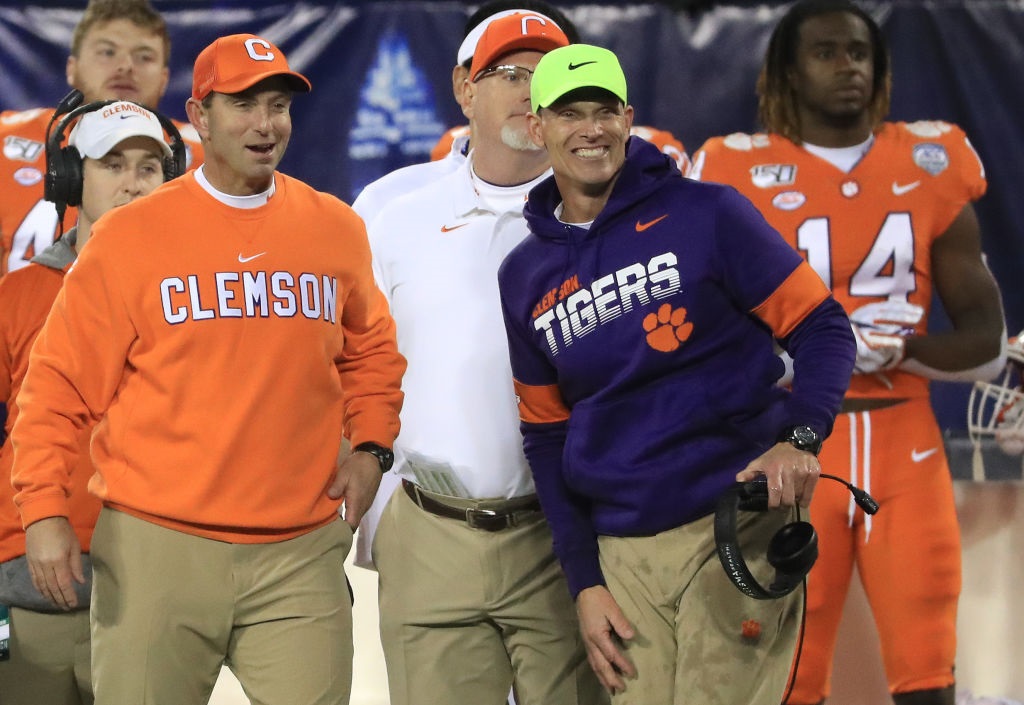 On Tuesday, just hours before the sport’s second National Signing Day, Michigan State head coach Mark Dantonio stunned the college football world by retiring from the Spartans program, at the still-vibrant age of 63.

Did Dantonio’s curiously timed announcement have anything to do with potential recruiting allegations, which came to light in the wrongful-termination lawsuit of former MSU assistant Curtis Blackwell?

That’s a concern for another day, if applicable.

In the meantime, BATSBY Sports breaks down six viable candidates to succeed Dantonio — Michigan State’s winningest coach in history, along with having the biggest chip on his shoulder — in East Lansing … assuming the reports of Cincinnati head coach Luke Fickell (26-13 record with the Bearcats) being the favorite to land this premium gig don’t hold up.

However, before doing so, let’s eliminate the candidates who sound great on paper … but would likely have little interest in moving to MSU at this point in their respective careers:

a) Josh McDaniels — The 43-year old assistant with the Patriots (offensive coordinator/quarterbacks coach) is a natural fit to succeed future Hall of Famer Bill Belichick in New England. In other words, the 16 seasons with this flagship franchise, along with J-Mac’s stated desire to remain in the NFL, would likely trump McDaniels’ lone season as a graduate assistant at Michigan State (1999).

b) Tony Elliott — The Clemson offensive coordinator would have ranked No. 1 or 2 on the listing below; but after signing a contract to become the highest-paid OC in college football this week, it’s tough to imagine Elliott exchanging Clemson orange for Michigan State green in relatively short order.

c) Robert Saleh — The San Francisco 49ers defensive coordinator would be a another dream candidate, given his ties to metro Detroit (Dearborn native) and Michigan State (launched his coaching career with the Spartans in 2002). However, Saleh will most likely be on every short list for NFL head-coaching vacancies next year. The timing probably isn’t right here.

d) Mike Tressel — Back in August, Tressel (MSU’s defensive coordinator/interim head coach) would have been my personal pick to succeed Dantonio, full time. However, given Michigan State’s innovation/recruiting difficulties in recent years, along with the potential stench of NCAA allegations, the Spartans’ brass might want to address this crucial hire with a clean slate.

AGE: 48
PLAYER: Kansas State as a collegiate (1991-92), playing for legendary coach Bill Snyder
BACKGROUND: Blue-chip defensive coordinator for Oklahoma (1999-2011) and Clemson (2012-present)
COACHING TREE: Bill Snyder, Bob Stoops, Dabo Swinney
NOTABLE: Previously ranked No. 2 as college football’s highest-paid assistants ($2.4 million per year)
LEGACY: Venables (Frank Broyles Award winner in 2016) has been a major component to three national champions over the last 20 years (one with Oklahoma, two with Clemson).
FEATHER IN HIS CAP: Venables would instantly bolster Michigan State’s recruiting efforts with defensive linemen and linebackers — the lifeblood of the Spartans program over the last 50-60 years.
WHY NEVER A HEAD COACH: Venables annually garners attention as a leading candidate for just about every major job, but ultimately chose to stay in his current situation, citing family stability. However, Venables might be looking to finally capitalize on his amazing success through the years.

AGE: 37
PLAYER: All-Big Ten safety at Wisconsin
BACKGROUND: Fast-rising defensive coordinator/defensive backs coach
COACHING TREE: Barry Alvarez, Bret Bielema, Paul Chryst
NOTABLE: 10-year NFL career with six different clubs (Bills, Ravens, Jets, Broncos, Saints, Browns)
LEGACY: Wisconsin finished the 2019 campaign ranked fourth nationally in total defense and 10th in scoring defense.
WHY NEVER A HEAD COACH: If not for a productive NFL career, Leonhard would already be a head coach at the Division I level. He’s been a prolific strategist and recruiter at Wisconsin, and would be a tremendous hire within the Big Ten. In fact, this time next year, Leonhard might be the hottest assistant in the country.

AGE: 46
PLAYER: Defensive back at Auburn (1992-95)
BACKGROUND: Interim head coach at Georgia Southern (2015) … coached running backs at UGA and Georgia Southern
COACHING TREE: Kirby Smart disciple
FEATHER FOR THE CAP: McGee currently has a No. 5 national ranking as a recruiter (source: 247sports.com). It’s absolutely essential that Michigan State lands a new coach who’s highly skilled with the recruiting game. Enough of primarily pulling in 3-star athletes … and then hoping they’ll develop into top-notch Big Ten performers.
PEERING INTO THE FUTURE: As a Georgia native and Auburn alum, no one at Michigan State might be shocked if McGee ever bolted East Lansing for the Dawgs or Tigers. Outside of those heart-string tugs, though, this would be premium job, allowing McGee to lay down serious roots for 10-15 years.

AGE: 40
PLAYER: Defensive back at Mount Union College (1998-2001)
BACKGROUND: Plenty of experience on the defensive side of the ball, with notable stops at Missouri, New Hampshire, Wyoming, Washington State (D-coordinator), Ohio State (D-coordinator duties) and Oklahoma (D-coordinator)
COACHING TREE: Lincoln Riley, Urban Meyer, Mike Leach, Gary Pinkel
LEGACY: Let’s start with the good news: Under Grinch’s direction, Oklahoma’s defense made solid strides during the regular season, holding nine opponents to 27 or fewer points. On the down side, the Sooners might have to carry the Scarlet Letter around for a while, in terms of surrendering seven passing touchdowns to LSU (QB Joe Burrow) in December’s College Football Playoff semifinal.
THINKING FORWARD: Like Jim Leonhard listed above, Grinch could be one of college football’s hottest assistants this time next year. So, at the very least, it would behoove Michigan State to give both coaches a long look during the interview process.