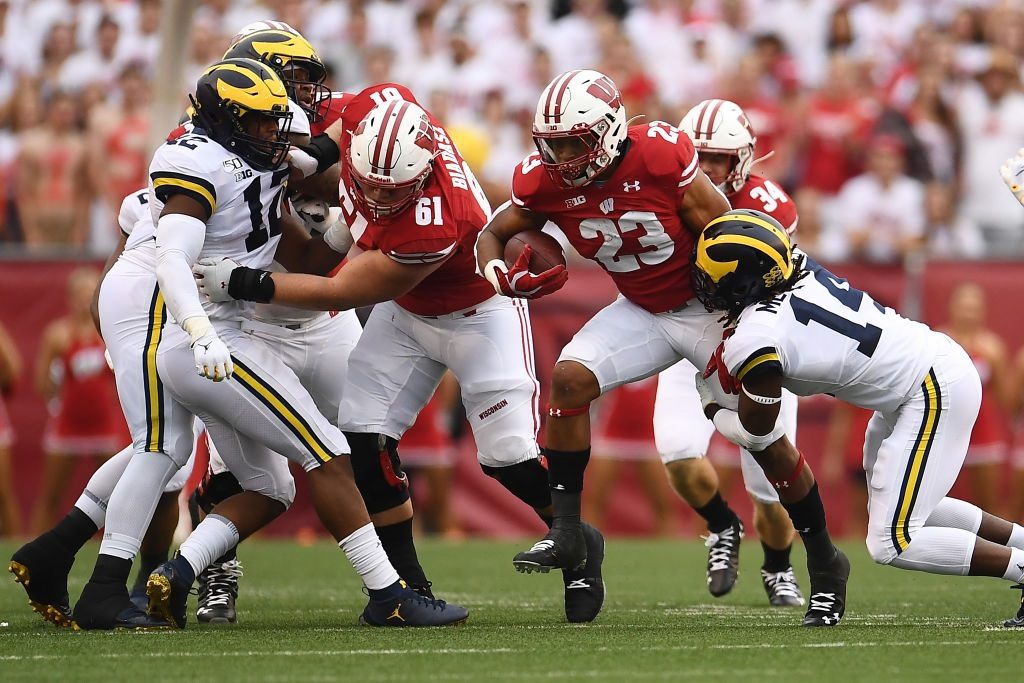 a) The SEC’s dream of commandeering the top four spots likely won’t come to fruition during the regular season, given Clemson’s ACC-flavored dominance and super-easy schedule from this point forward.

However, the SEC has a decent shot at the 2-5 slots, if Auburn (neutral-field win over Oregon, road win vs. Texas A&M) can steamroll through Mississippi State and Florida over the next two weekends.

b) Wisconsin warranted the countdown’s biggest ascension for the week, rising from 13 to 8 after mauling Michigan in Madison (35-14).

In fact, the Badgers were seemingly ready to crack the top 5 upon leading 35-0 in the fourth quarter … only to surrender a pair of meaningless scores late in the game.

Was it really meaningless?

At the time of their 35-0 lead, the Badgers had yet to allow a point all season.

After speculative victories over Northwestern (quite possibly nation’s worst offense) and Kent State, Wisconsin’s seven-game finishing kick of Michigan State Iowa, Purdue at home … and Illinois, Ohio State, Nebraska, Minnesota on the road could be daunting — even with a conveniently placed bye week (Nov. 2).

Which brings us to this: How did Wisconsin draw Michigan, Michigan State and Ohio State, as crossover opponents, in the same season?

That seems patently unfair for a program harboring realistic dreams of a Big Ten title and the College Football Playoff.

c) The AP voters were right to drop Notre Dame only three spots in the countdown.

If the other 23 teams listed above had simultaneously scheduled a high-profile road test at Georgia, maybe Clemson, Alabama, LSU, Ohio State, Oklahoma, Wisconsin, Iowa and California would have replicated Notre Dame’s spread of plus-six points.

In other words, in this age of 13-member committees determining the four-team Playoff, instead of computers, the Fighting Irish merit major props for scheduling a presumptive beatdown which never took place.

d) We mentioned Cal above for one substantial reason: Dating back to last season, the Bears’ vaunted defense has surrendered 23 or fewer points for 11 consecutive outings — including Saturday’s controversial road win over Ole Miss.

The Pac-12 should notching prominent road victories against Michigan State (via Arizona State) and Mississippi (via Cal) in back-to-back weeks.

However, this euphoric feeling comes at a steep price:

The Pac-12 referees/judges are, ahem, earning a reputation for blowing the biggest moments of these intersectional matchups, missing out on key calls that seem obvious to everyone else inside the stadium … along with the massive TV audiences.

Bottom line: In this age of Replay, especially near the goal line, it’s the equivalent to Officiating Malpractice that someone didn’t stop the game to review Ole Miss’s supposed touchdown with 12 seconds remaining.

How is this the case, since Boise State and UCF won’t meet on the same field?

The Broncos were already on track for holding the highest ranking of any Group Of Five school by season’s end; and with respectable road trips to BYU (Oct. 19), Utah State (Nov. 23) and Colorado State (Nov. 29) still on the docket, it’s implausible to envision another mid-major power leapfrogging Boise State, in lieu of an undefeated campaign.

PrevPreviousFANTASY FOOTBALL: Final positional rankings for NFL Week 3
NextNFL: The Daniel Jones ‘A Star Is Born’ hype in New York City is real … unless it isn’tNext