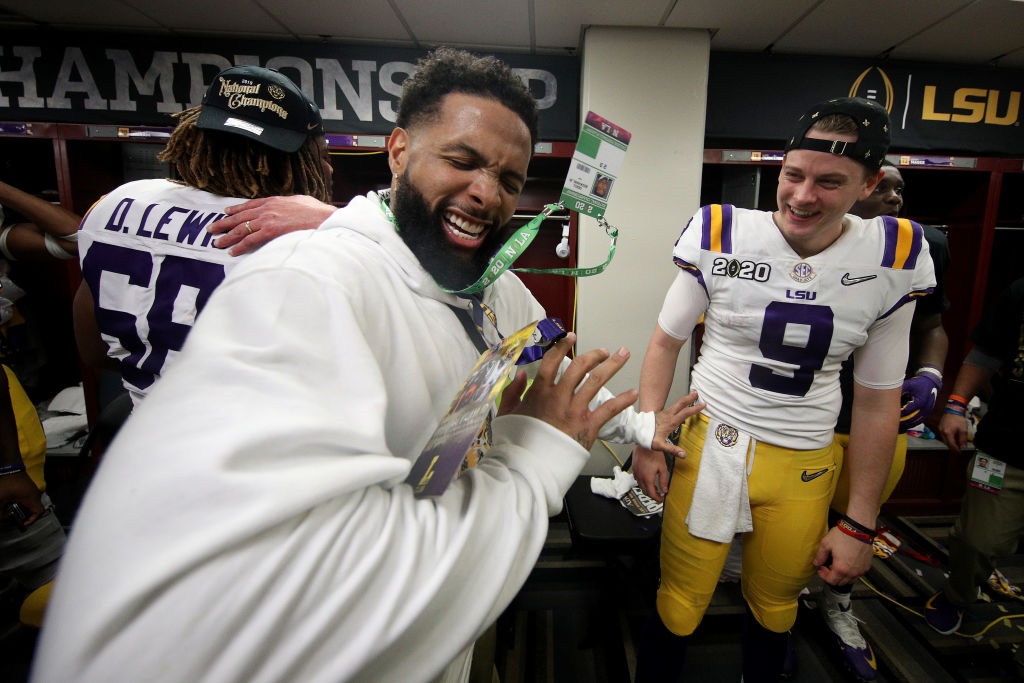 For the sake of brevity, and cutting through the proverbial bull, let’s universally acknowledge that $20 Handshakes have long been a staple of college football programs everywhere, dating back 50, 60 or even 70 years.

And within this rationale, let’s also presume the NCAA has been quietly tolerant of these surreptitious acts, given the sheer difficulty of cracking down on such measures — let alone being able to prove it in a court setting, minus clear video evidence.

Typically after football games, a small number of well-heeled boosters might hang out near the locker-room exit and deftly turn over money bills to various players, under the simple, but stealth act of shaking hands and obliquely offering praise/consolation for the recently completed event.

Is this an illegal act, in the eyes of NCAA enforcement rules?

At the same time, it also bears the look of a trivial occurrence, perhaps akin to someone slipping a restaurant maitre’d $20 … in hopes of securing a better table for dinner.

Just don’t be so obvious about it. Please.

Which brings us to the astonishing case of NFL star Odell Beckham Jr. …

On Monday night, the former LSU standout was beaming with pride along the sidelines for the LSU-Clemson championship bout, living and dying on every big play of the Tigers’ 42-25 victory (clinching a perfect 15-0 campaign).

Things went sour, however, when TV cameras caught Beckham distributing cash to the LSU players during their jubilant post-game celebration — both on the Mercedes-Benz Superdome turf … and inside the Tigers locker room.

At first, the image of Beckham openly doling out cash payments to players elicited laughs from national pundits. After all, Beckham would never be immature enough to potentially commit illicit acts in full-view of the press.

It had to be fake money. Right?

On the contrary, while conducting a media interview shortly thereafter, LSU quarterback Joe Burrow — who might have notched the greatest season of any quarterback in college history (60 TD passes, Heisman Trophy, national championship) — revealed Beckham’s money handouts were indeed real.

In Burrow’s mind, there would be no penalty for accepting Beckham’s payments, since his college eligibility expired just seconds after LSU claimed its third national title of this century.

This might be true, when citing the verbatim language of the NCAA rule book. But this hardly clears the other LSU players with remaining eligibility … if anyone in that category graciously accepted Beckham’s unauthorized gift in the afterglow of capturing a championship.

The NCAA might be viewed as a joyless, mechanical organization in certain circles, a group seemingly committed to suppressing all extraneous forms of fun, regarding the lives of student-athletes.

But trust me, on Tuesday morning, every member of the NCAA office was cheering for Beckham’s money ruse to be fake, knowing that actual violations could open an unwanted can of worms for everyone involved.

For example, even if every LSU player with eligibility returns the Beckham payments in short order, the NCAA must still find a way to deter this oddball situation from occurring again.

Perhaps enacting such measures as …

a) Banning all non-essential players, coaches, staffers and media from locker-room celebrations.

b) Prohibiting Beckham from collecting sideline passes for future LSU football games. Maybe even forcing OBJ to disengage from the program for a set period.

c) Sending the LSU football program a Notice of Allegations, perhaps leading to some tangibly negative consequence. For something that might have appeared harmless and humorous at first glance.

As one might attest, none of the above options are palatable. The college football universe had just finished enjoying the fruits of a strong season and a great College Football Playoff, highlighted by Monday night’s five-hour infomercial (championship game), celebrating all the cool things about this wonderful sport.

Instead, we’re talking about a superstar persona from the NFL, who demonstrated a galling lack of common sense during one brief interlude, stealing all the thunder from LSU making a case for the most prolific single season in college history.

It’s enough to turn the stomachs of any rabid fan base in the college game.

And don’t forget about the boosters … the same Friends Of The Program who typically possess enough common sense to leave all future player payments to the $20 Handshakes outside the locker-room area.