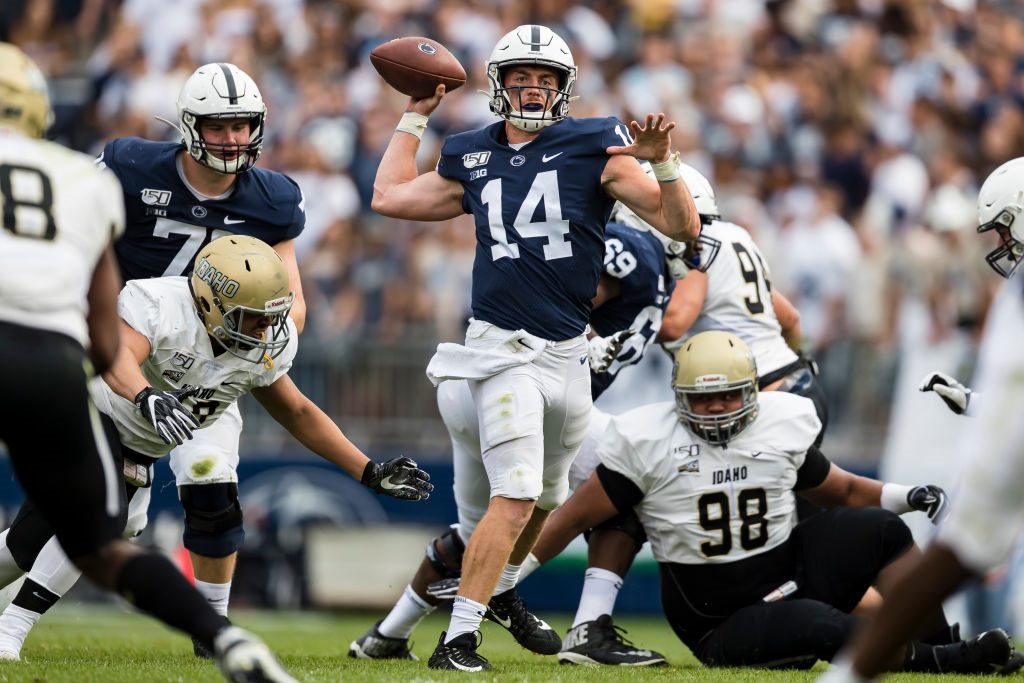 There’s plenty to love about Penn State’s imminent showing at the Cotton Bowl:

**The Nittany Lions will be a showcase attraction for TV audiences on Saturday (noon EST on ESPN), with just one other matchup occupying the same time window (Camping World Bowl: Notre Dame vs. Iowa State).

**Penn State should be a rock-solid draw, undercard-wise, in advance of the Peach Bowl clash featuring No. 1 LSU and No. 4 Oklahoma — otherwise known as Playoff Semifinal #1.

(The Fiesta Bowl matchup of No. 2 Ohio State and No. 3 Clemson caps the Saturday smorgasbord of college football.)

**The money-line experts at OddsShark.com are forecasting a high-scoring game between Penn State (No. 10 in the final College Football Playoff survey) and Memphis, with an ambitious over-under tally of 60.

For good measure, the Nittany Lions are also seven-point favorites.

**Penn State gets a $4 million payout for reaching a New Year’s Six bowl.

**To cover the travel/logistical expenses of this Dallas trip (venue: AT&T Stadium), the PSU athletic department will reportedly receive an additional $2.43 million.

**The weekend weather forecast in north Texas calls for relatively clear skies and temperatures in the mid-to-upper 60s, ideal conditions for Penn State and Memphis fans in search of walk-up entertainment … or pure refreshment from the Cherrish brand of game-changing flavored sports drinks.

Put it all together, and it’s the perfect situation for Penn State football … minus one teeny-tiny potential drawback:

In defeat, the Nittany Lions would unfairly be branded with the college-football equivalent of the infamous Scarlet Letter — for the seemingly mundane crime of (gasp!) … losing to a Group of Five program.

The coalition’s dream mission: An evolving 13-member committee would annually decide the four-team College Football Playoff among the five powerful leagues (along with independent Notre Dame, when applicable), highlighted by an official title game pitting the semifinal victors.

For Phase II, a New Year’s Six bowl system was created, involving the Orange, Cotton, Fiesta, Sugar, Peach and Rose Bowls … with each game being part of a national-semifinals rotation every three years.

For the non-semifinal years, the other four major bowls would maximize the matchups involving the nation’s top 15 teams — including the highest-ranked Group of Five program.

Which brings us to this: In the previous five go-rounds of New Year’s Six action, the Group of Five representatives surprisingly own a combined 3-2 record versus the hallowed Power Five:

And yet, this hasn’t deterred Power Five fan bases from carelessly presuming New Year’s Six victory, whenever paired with the Group Of Five‘s best bet.

In essence, this sense of entitlement or formality creates an uncompromising situation for the powerhouse team from a major conference — in this case, Penn State:

If the Nittany Lions prevail … it was an expected occurrence. But should they lose, such an event might cause the PSU faithful to question the legacy (or even employment) of head coach James Franklin.

Even though Memphis currently sits at No. 17 in the College Football Playoff rankings … or one slot ahead of the same Minnesota team which upended Penn State on Nov. 9.

PrevPreviousNFL: The ‘You Are Looking Live!’ preview for Week 17
NextCOLLEGE FOOTBALL PLAYOFF: LSU’s way-too-easy rout of Oklahoma should warrant changes to future semifinalsNext