COLLEGE FOOTBALL: Penn State’s baseline dream of a New Year’s Six bowl will shake out over the next 4 weeks 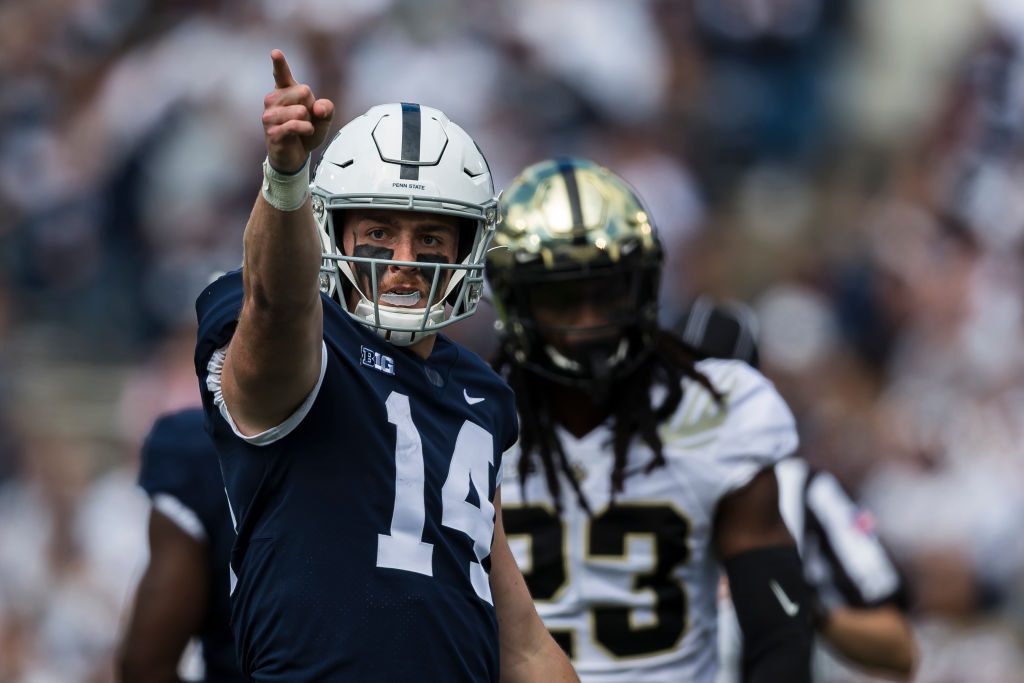 For just a brief moment, forget about the emerging mega-hype surrounding the potential monster matchup of No. 10 Penn State and No. 3 Ohio State in late November.

The way things are progressing, it’s safe to say that day’s winner (in Columbus) will represent the East Division in the Big Ten title game on Dec. 7.

Rather, for today’s piece, we’ll focus on the next imminent hurdle from Penn State’s to-do list: Surviving the upcoming four-game gauntlet of …

If Penn State can successfully navigate this five-week run of Big Ten heavyweights (bye included), the Nittany Lions should be lead-pipe cinches for a New Year’s Six bowl — regardless of how the Ohio State clash shakes out the week before Thanksgiving.

(NOTE: The College Football Playoff semifinals will involve the Peach and Fiesta bowls.)

In fact, at the very least, the loser of Penn State-Ohio State — assuming the winner takes care of business in the Big Ten championship — could be staring at a baseline invitation of reaching the Rose Bowl.

And for that hypothetical, we’d be talking about the greatest consolation prize in college football.

SATURDAY’S ALRIGHT FOR FIGHTING ON ABC

It’s hard to recall the last time a Big Ten school became the centerpiece of ABC’s Game Of The Week on consecutive Saturdays, at least not involving the on-the-fly logistics of Conference Championship Saturday.

Yes, in a perfect world, ABC would have been (privately) happy to tout a pair of unbeatens this Saturday night, amid the warm glow of the Iowa faithful saluting/waving to the children’s hospital connected to Kinnick Stadium in Iowa City.

On the plus side, though, Michighan’s win over Iowa from last week raises the stakes for supremacy in the Big Ten East race … while dropping a ratings-bonanza bullseye on the Michigan-Penn State clash for next Saturday.

Does Penn State have the balance and maturity to handle two high-profile encounters in a seven-day period?

On the offensive side of the ball …

Going further, Hamler might be the most explosive open-field runner in all of college football … as this lightning-quick, joystick-level touchdown against Maryland might suggest.

THE ROAD TO SOMEWHERE

For my money, Penn State had the nation’s third-best team two years ago (Saquon Barkley’s final season in Happy Valley) … until a back-to-back road trip of Ohio State (lost 39-38) and Michigan State (24-21) halted all plans of making the College Football Playoff.

Fast forward to the present: Nittany Lions fans might soon experience flashbacks to the unfortunate stretch of 2017, when viewing Penn State’s upcoming road swing with Michigan State and Minnesota — the same Golden Gophers who are undefeated (5-0 overall) and co-leading the Big Ten West race (with Wisconsin).

But there are silver linings here, when executing a compare/contrast:

a) For starters, the 2017 Michigan State team was eminently more balanced than this year’s Spartans.

b) Penn State will likely be solid Vegas favorites for the Spartans and Golden Gophers, regardless of venue.

c) Michigan State’s defense gets a lot of national press … but Wisconsin and Penn State have been even more dominant after six weeks.

d) The Nittany Lions’ defensive front seven might have no peers nationally. For a prime example, look no further than Maryland collecting a grand total of 128 yards against Penn State two weeks ago — at home.

Bottom line: Before Penn State can realistically attack its major seasonal goals of claiming the Big Ten East title, capturing the conference championship and earning a spot in the four-team Playoff … the program must first secure a cushy spot in the lucrative New Year’s Six bowl rotation — most likely the Rose, Orange or Cotton.

This is the joy of the sports calendar turning to October. The big dreams start to crystallize before your eyes … assuming there are minimal hiccups along the way.

PrevPreviousNFL: The ‘You Are Looking Live!’ preview for Week 6
NextBOLD PREDICTIONS: 4 soothsayer promises to behold for the NFL’s Week 6 slateNext