COLLEGE FOOTBALL: The Lane Kiffin/Ole Miss show should be great theater, minus the uber-hype of previous stops 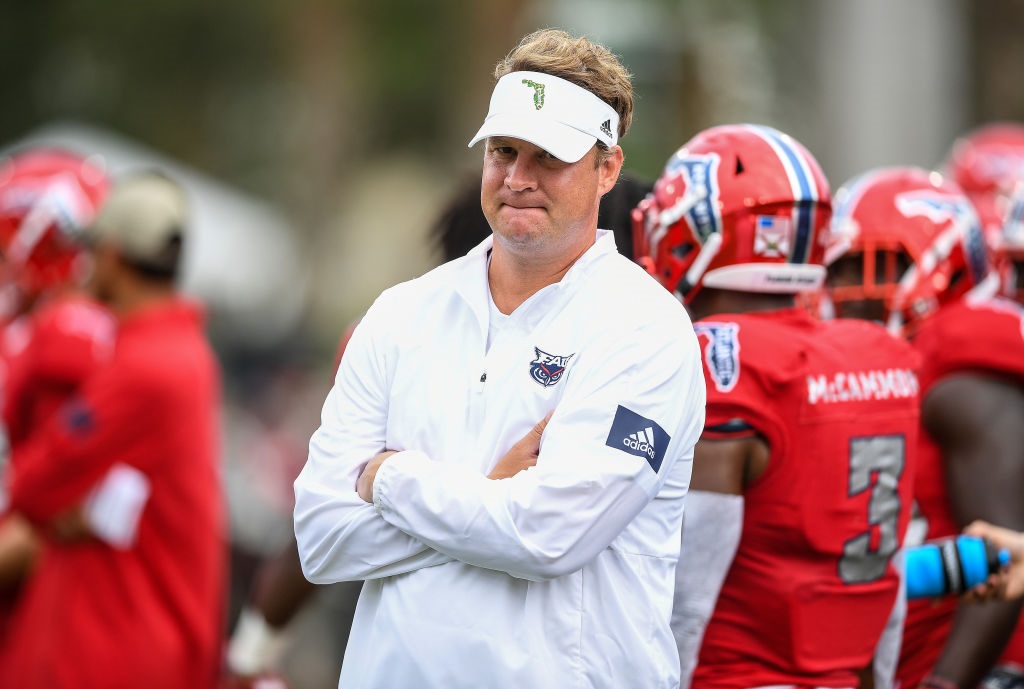 Over the weekend, LSU throttled Georgia in the SEC title game and reclaimed the No. 1 seed in the final College Football Playoff rankings.

LSU quarterback Joe Burrow (SEC single-season record of 4,715 passing yards, 48 passing TDs) was chosen to represent the conference as a Heisman Trophy finalist, and might serve as the prohibitive favorite for college football’s most prestigious award.

And despite having a down year, relatively speaking, Alabama still ended up with a plum invitation to the Citrus Bowl (versus Michigan), for what could be the third-most attractive matchup of the bowl season (after the CFP semifinals).

You know who else dominated the weekend in SEC circles? Lane Kiffin.

The image of Kiffin gently/happily carrying someone else’s baby on the tarmac of the airport near Oxford, Mississippi — just hours after accepting the Ole Miss head-coaching job — might have been the most memorable (read: surreal) moment of all.

It even prompted initial thoughts of the baby being a convenient “plant,” thus setting up Kiffin for a spectacular response to one question, during his introductory press conference with the Rebels (11:30 mark):

REPORTER: Can you talk about the reception you’ve received from the fan base here at Ole Miss … kissing and hugging babies after getting off the plane on the tarmac?

KIFFIN: It’s a lot better than another tarmac experience that I had.

For those with short memories, Kiffin was coyly alluding to the fall of 2013, when Pat Haden (then the athletic director at USC) reportedly fired Kiffin as head coach with the Trojans, while the team was waiting for a ride home at an airport tarmac — following a blowout road loss to Arizona State.

Kiffin didn’t even make it back to campus with his players … that’s how cold-blooded and dismissive USC officials were on that day.

Well, in the aftermath of that national embarrassment, Kiffin has enjoyed a three-tiered comeback story over the last six years.

First, he took Nick Saban’s offense at Alabama to new heights for three seasons, serving as the school’s innovative and cocksure offensive coordinator.

(Who can forget the imagery of Kiffin signaling for an Alabama touchdown in the 2014 SEC championship game … before the ball even left the quarterback’s hands?)

And now, he’s back home in the SEC, leading an Ole Miss program that’s hungry for a return to glory.

By all accounts, this was a strong and stable hire.

a) Prior to Kiffin’s arrival, Florida Atlantic had only collected three winning campaigns from 2004-16.

b) For the 2019 season, Florida Atlantic led the entire country in turnover margin and turnovers gained.

This season, the Owls also ranked seventh overall in turnovers lost — a credit to Kiffin’s evolving acumen as a creative, but disciplined coach, in terms holding players accountable on the field.

c) Remember Kiffin’s uber-brash press conference upon being hired at Tennesssee, circa December 2008?

His ambitious declarations were the actions of a 30-something coach who might have had more bravado than substance; and that circus atmosphere stayed with the Volunteers throughout the 2009 season … capped by Kiffin’s extremely awkward breakup with Tennessee just 14 months later.

Fast forward to the present: Kiffin’s in his mid-40s now. He’s more centered and seemingly less inclined to make promises that have little chance of being fulfilled.

d) Unless Kiffin still holds aspirations of coaching in the NFL, Ole Miss might be his preferred destination for the next 10 years — assuming the Rebels are happy with the program’s progress.

In that vein, Kiffin certainly has a great combination of youth and experience, when it comes to the high-stakes games of recruiting 4- and 5-star talent … in addition to poaching kids from other schools, via the so-called Transfer Portal.

Maybe Kiffin will even lure a disenchanted USC player to Oxford over the next few months — the football version of Tit For Tat.

Minus any ‘tarmac’ drama.