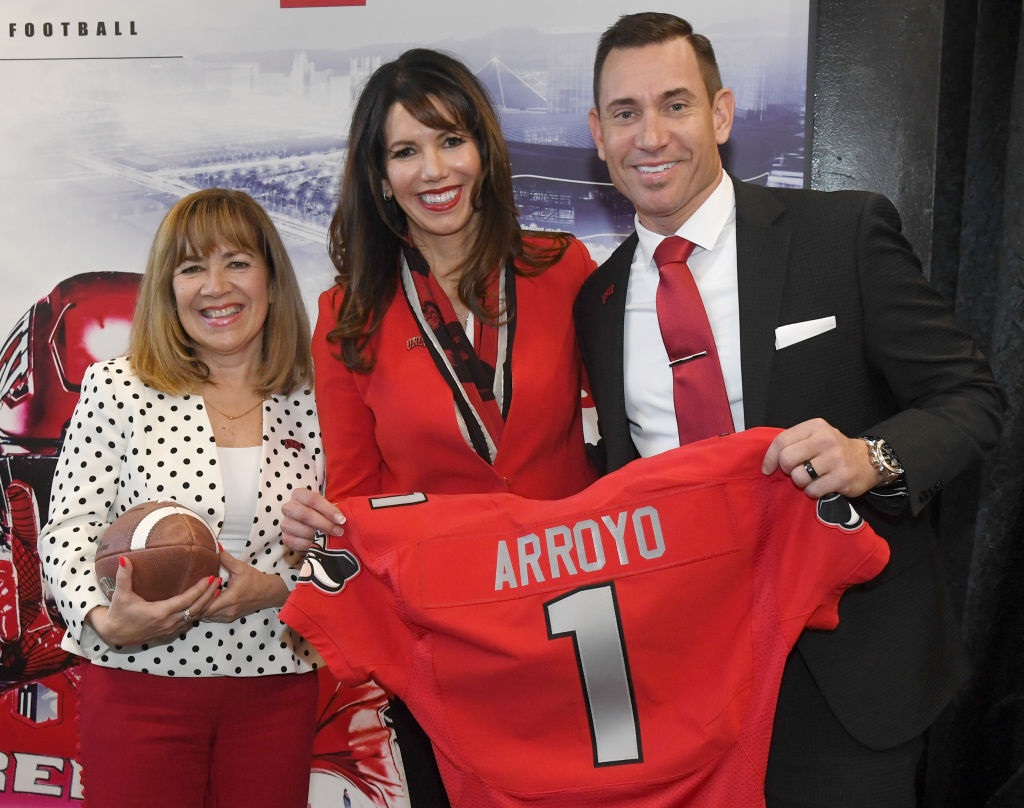 These legacy contributors certainly helped shaped the image of the Rebels (and the school, in general) during the 1970s, 80s and 90s.

However, in some imperceptible way, it might have also stagnated the athletic program’s progress for portions of this century, serving as a convenient crutch to access during lean times.

The seeds of substantial change, however, were sown in 2017, when UNLV took the bold, but necessary step of hiring Desiree Reed-Francois as the new director of athletics.

The initial headlines surrounding the hire involved Reed — a former club rower during her collegiate days at UCLA — becoming the first Hispanic woman in history to lead the athletic department of a Football Bowl Subdivision program (the old ‘Division I’ moniker), a groundbreaking national achievement which should be celebrated at every turn.

But would it lead to sustainable athletic success for the Rebels?

For Year 3 of the Reed-Francois regime, we might already have enough observation time to characterize this hire as an unqualified success for all parties involved, citing the litany of notable accomplishments:

a) Quickly restructuring the UNLV athletic department’s finance office, while simultaneously balancing its budget for the initial two years.

b) Bolstering each athlete’s academic experience, while providing more innovative models for reaching, developing and motivating the students.

c) Early in Reed-Francois’ tenure, UNLV publicized the particulars of a 10-year multimedia rights deal with Learfield Communications, one of the biggest digital entities in college sports.

At the time, according to the school’s Web site, the Learfield deal brokered by Reed-Francois (and staff) represented the highest revenue output of any Mountain West Conference program.

Prior to taking over UNLV’s entire program, Reed-Francois carved out high-level executive experience at the University of Tennessee (Deputy AD from 2009-13), the University of Cincinnati (Senior Associate AD/Interim AD from 2013-14) and Virginia Tech (overseeing the football program’s business activities from 2014-17).

f) Placing special emphasis on UNLV’s partnership with the Andre Agassi Foundation for Education (2018), furthering the development of the Center for Student-Athlete Excellence. According to the school Web site, this initiative subsequently led to record amounts of corporate philanthropy for the 2018-19 fiscal year.

g) As part of UNLV’s commitment to diversity, in Reed-Francois’ first year, 70 percent of new department hires were people of color or women. Of equal significance, 63 percent of new hires were former student-athletes.

As part of these changes, the school’s mental health and nutrition programs were overhauled and enhanced, through the full-time, in-house additions of a psychologist and certified nutrition expert.

**The same installations were earmarked for Cox Pavilion, Wilson Stadium (baseball) and the Frank and Vicki Fertitta Tennis Complex.

When speaking to BATSBY Sports, Reed-Francois marveled at the school’s substantive changes in recent years, setting the stage for an even bigger wave of growth in the not-too-distant future.

“A strong foundation has been developed thanks to the incredible generosity of our amazing community, the support of our university and the hard work of our student-athletes, coaches and staff.

“With our mission of graduating leaders, winning championships and excelling in all that we do as our guide, we continue to work relentlessly every day to make Rebel Nation proud. I am enthused with our progress and what the future holds for UNLV Athletics.”

Arroyo could bring immediate dividends to the transitioning Rebels program (22-51 over the last six seasons).

Put it all together, and Arroyo’s personal stamp of aggressive offense, relentless recruiting and perpetual enthusiasm for the task at hand could serve as one of the college game’s most dynamic hires.

Here’s something which might have seemed preposterous or even ostentatious just a decade ago:

Top-notch recruiting Web sites actually rank college football’s best training facilities on an annual basis, chronicling the perpetual race among Power 5 and Group Of Five programs, in terms of brainstorming/constructing the most decadent football complexes for players, coaches and trainers.

Remember how the size and overall presentation of college media guides (stock paper/color photos!!!!) became a major selling point with recruits in the 1980s, 90s and 2000s?

Well, in the present, it might be easier to form substantive conclusions with national/regional recruiting rankings, based on the aesthetic appeal and creature comforts of various training facilities throughout the country.

For example, here were top-rated training facilities for 2019, as cited by 247sports.com:

Of the schools listed above, 16 possessed a top-20 listing with 247sports.com’s 2020 recruiting rankings, while cumulatively accounting for 23 commitments from 5-star-rated recruits … and 171 4-star recruits.

That’s a significant piece of the pie with blue-chippers from a single high school class.

So, what does all this have to do with UNLV?

As part of Reed-Francois’ grand vision with UNLV athletics, the school recently christened the Fertitta Football Complex, a state-of-the-art, $34 million training center that promises to be a real game-changer among the nationally renowned programs — let alone with the Mountain West and other Group of Five leagues (MAC, American Athletic, Conference USA, Sun Belt).

And don’t forget, UNLV football will also have a new gameday home in 2020, sharing Allegiant Stadium with the NFL’s Oakland Raiders, who will officially become the Las Vegas Raiders in a matter of weeks.

The NFL coming to Las Vegas truly represents a big deal; and the $1.8 billion stadium reflects the significance of such a venture.

In addition to having a roll-in natural grass surface (similar to University of Arizona Stadium, home of the NFL’s Cardinals), the 10-level Allegiant Stadium will come equipped with a clear ETFE roof; sleek silver-and-black exterior; and large, retractable side windows providing awe-inspiring views of the famed Las Vegas Strip.

It also boasts of becoming “the most connected stadium America,” in reference to the 1,700-plus access points (online connectivity), when attending one of the facility’s many world-class events.

Put it all together, and UNLV football might have the brightest 10-year outlook of any Group Of Five program (Memphis, Boise State, UCF, Cincinnati, Houston, Navy, SMU, etc.), through the execution of four primary components on Reed-Francois’ watch:

**The omnipresence of world-class facilities

These are the building blocks of a major sports revival, in a distinctive college marketplace.

It’s also the basis for believing UNLV’s best and brightest moments lie ahead, while still embracing the colorful glory days of decades past.