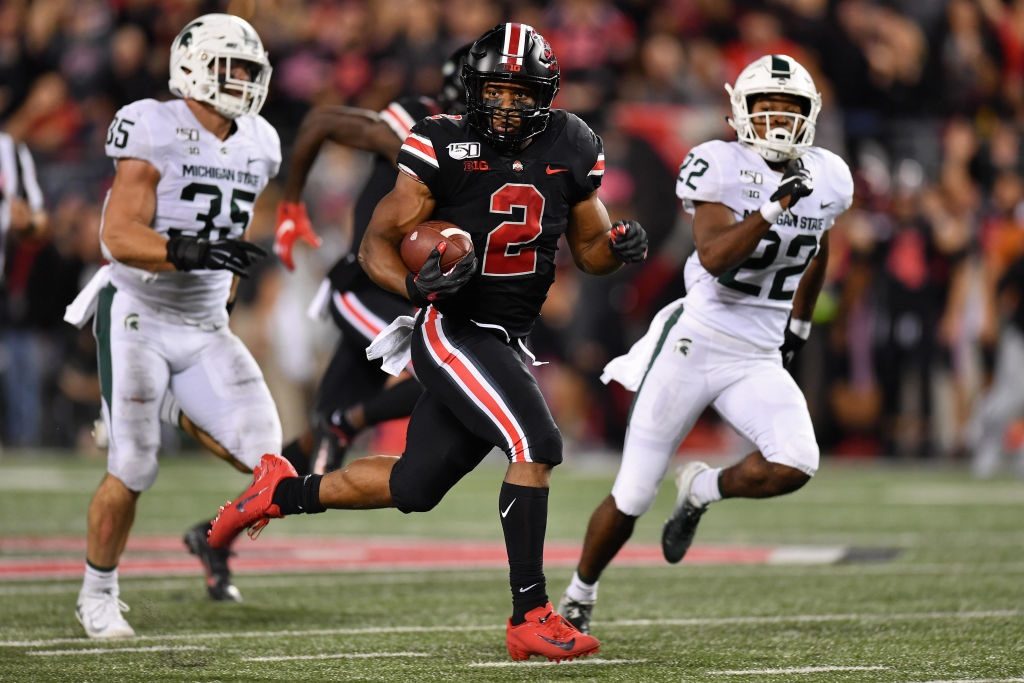 TAKE #1 — The Playoff committee pulled a genuine shocker with the No. 1 spot … even if it was the correct call

For the CFP projections from Tuesday morning, I acknowledged that Ohio State deserved the top ranking, due to its balanced dominance (top-3 national ranking with scoring defense/scoring offense) and incident-free destruction of the first eight opponents (average victory margin: 39 points).

And yet, I sincerely believed the 13-member Playoff committee couldn’t resist the extra-hype charm of earmarking Alabama and LSU for the 1-2 spots (any order) … just in time for Saturday’s showdown in Tuscaloosa.

Well, color me surprised. The Buckeyes are apparently a clear-cut No. 1 in the committee’s eyes, thanks to the above statistics and two blowout victories over programs ranked in the CFP top 20 (Wisconsin, Cincinnati).

And nothing should change at the top, from this point forward, if Ohio State disposes of Maryland, Rutgers, No. 4 Penn State, No. 14 Michigan and the Big Ten West champion over the next five Saturdays.

It wouldn’t be a major stretch to cite the College Football Playoff as the de facto “Crimson Tide Invitational,” since Alabama has been a part every Playoff, dating back to 2014.

But this year presents an interesting hypothetical: If Alabama (second-easiest schedule, to date, among the current CFP top 5) incurs a home defeat to No. 2 LSU, it’s implausible to imagine the Tigers (signature wins over Texas, Florida, Auburn) dropping two games against either Ole Miss (road), Arkansas or Texas A&M.

Consequently, the Crimson Tide would be frozen out of consideration for the SEC championship; and by proxy, ‘Bama wouldn’t get any extra credit (from the CFP committee) for capturing the league title.

On the flip side, LSU could suffer a heart-breaking loss on Saturday and still remain the hunt for Playoff consideration, should Clemson (No. 5), Oregon (7th) or Utah (8th) lose prior to Conference Championship Weekend.

The committee might be inclined to reward LSU for scheduling Texas during non-conference play … whereas Alabama only connected with Duke, Southern Miss, New Mexico State and Western Carolina outside of league play.

TAKE #3 — It’s a pretty simple proposition for No. 6 Georgia: Just win out … and the Dawgs will be in the semifinals

The day will come (we think) when the SEC gets denied entry into the four-team Playoff; but it likely won’t occur this season, since only a handful of challengers from the SEC (LSU/Alabama), Big Ten (Ohio State/Penn State/Minnesota), ACC (Clemson) and Big 12 (Baylor) can still become undefeated conference champions in early December.

And if UGA (7-1 overall; key wins over Notre Dame, Florida) stays hot over the next five weeks — beating the likes of Missouri, Texas A&M, No. 11 Auburn and LSU or Alabama in the SEC title game — the Bulldogs should be an easy call for a top-4 seed, regardless of how the Pac-12 crown shakes out.

That aside, there is one Chaos Theory scenario to consider:

a) Hypothetically speaking, let’s say Clemson, No. 12 Baylor and No. 17 Minnesota maintain their unblemished records through Conference Championship Saturday.

All three would be shoo-ins for the Playoff, factoring in the perfect records and major bumps with Strength of Schedule quotient.

b) Would the Playoff committee have the guts to select a one-loss LSU team (assuming just the Alabama defeat) or the Pac-12 champion (either Oregon or Utah as the one-loss chap) over a red-hot Georgia squad?

This seems highly unlikely. Georgia has too much national cachet, along with a robust finishing schedule, to get the boot from that hypothetical.

At first blush, the Sooners fared well with the initial rankings, scoring the 9th slot … just 10 days after falling to Kansas State on the road.

However, the ranking doesn’t carry much down-the-road weight, when citing four factors:

a) If Oregon and Utah (both 8-1) reach the Pac-12 title game with no more hiccups, the conference champion would be a solid lock to finish ahead of Oklahoma.

b) The Sooners desperately need No. 12 Baylor to enter the top 10 before next week’s clash in Waco.

Of course, the chances of that happening are remote … since the Bears draw TCU (2-3 in Big 12 play) on Saturday.

c) The LSU-Alabama and Ohio State-Penn State losers might still be better positioned for a top-4 seed, assuming neither defeat involved a blowout situation.

d) Even if Oklahoma upends Baylor next week, a neutral-field rematch victory over the Bears (Big 12 title game) likely wouldn’t be enough to vault the Sooners over a one-loss Pac-12 champion.

From our perspective, it’s a no-win situation, short of entertaining Oklahoma fans in the Orange Bowl, as a consolation prize.