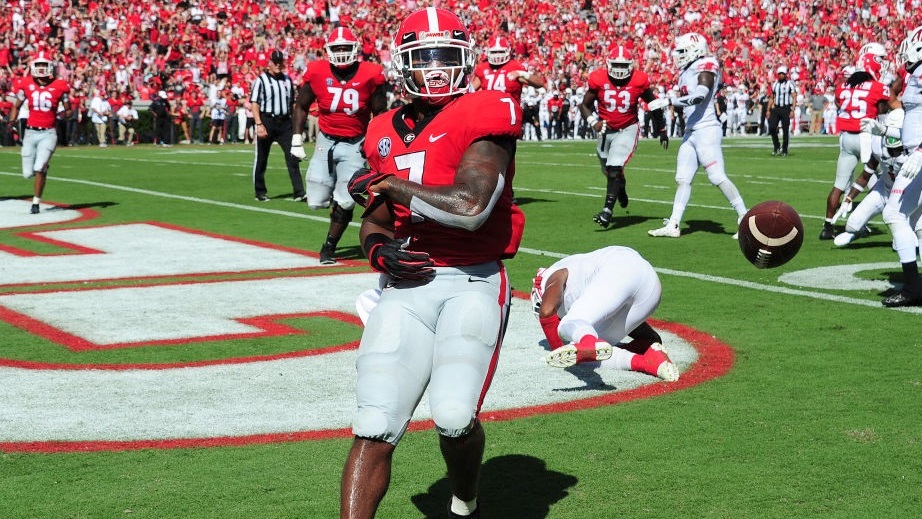 We apologize for the hyperbolic statement involving the above sub-headline.

**Ohio State might be the most dominant team in college football (average victory margin: 42.4 points), but last week’s No. 1 ranking had the look of a mere placeholder, in advance of the LSU-Alabama showdown.

**Clemson has been running roughshod over ACC opponents (average victory margin for this span: 41 points) during October and November.

But even the defending national champions cannot make a rock-solid case for No. 1 or 2 this minute, given the lingering stench of the fortunate over North Carolina on Sept. 28.

(The Tar Heels were a two-point conversion away from pulling off a monumental upset.)

TAKE #2 — Georgia momentarily deserves the slot-above ranking over Alabama, even if the Crimson Tide merit the tiebreaker edge on two crucial fronts

COMMON OPPONENTS: Neither Georgia nor Alabama had difficulty with Tennessee back in October, with both powers enjoying a final spread of 20-plus points.

However, the Crimson Tide possess the clear-cut advantage with South Carolina, sprinting past the Gamecocks by 24 points on the road.

SIGNATURE DEFEATS: No one would dispute Georgia has more quality wins than Alabama, dispatching of Notre Dame and Florida in the season’s first half.

But at this point, the Crimson Tide easily have the more palatable defeat, compared to the Dawgs, falling to top-ranked LSU on Saturday.

The one thing working against Alabama? Georgia possesses tangibly more upside with the Playoff rankings, having the potential to claim the No. 1 spot by Dec. 8, whereas the Crimson Tide would likely finish no higher than fourth.

Scheduling doesn’t help Alabama’s case much either, since the Tide and Dawgs both encounter Auburn in November.

Throw in Georgia’s prospective date with LSU in the SEC title game (Dec. 7) … and it’s pretty clear that ‘Bama likely needs one or two major gifts to dramatically alter its CFP destiny.

TAKE #3 — Minnesota and even Penn State still control its CFP fates, relative to representing the Big Ten in the semifinals

In some perverse way, the Nittany Lions — dropped by the Golden Gophers last week — might have improved their chances of landing a top-4 seed on Dec. 8.

How is this possible?

For Step 2, the Nittany Lions then get hypothetical revenge on 11-0 Minnesota in the conference championship game.

The combination power of seizing the Big Ten crown and beating a pair of top-5 foes in 15 days’ time would likely be enough to leverage Penn State into the Playoff, perhaps possessing a better case than Alabama, Georgia and the Oregon/Utah loser (Pac-12 championship).

Moving west … Minnesota would need to experience a similar run of success over the next four weekends, defeating Iowa, Northwestern, Wisconsin to close the regular season and then ousting Ohio State or Penn State in the Big Ten title game.

That aside, there’s no plausible scenario in which the Big Ten could shoehorn two teams into the Playoff.

The Golden Gophers might be riding high with the first 9-0 start in school history (including the national championship years), but the overall schedule doesn’t carry much clout, compared to other elite-level programs.

Plus, back in September, Minnesota slipped past South Dakota State, Fresno State and Georgia Southern by a grand total of 13 points.

In the Gophers’ case … optics matter, short of a glorious undefeated run to the Peach Bowl (Atlanta) or Fiesta Bowl (Arizona).

TAKE #4 — Pac-12 fans shouldn’t freak out just yet, regarding the rankings for Oregon and Utah

For me, there are only two scenarios in which the Pac-12 champion would get denied Playoff entry:

a) For the SEC title game (Dec. 7 in Atlanta), Georgia knocks off LSU in a nip-and-tuck classic, thus prompting the CFP committee to collectively reward a one-loss champion from college football’s toughest conference (UGA Bulldogs) … and the one-loss SEC power with the nation’s best seasonal resume (top-10 victories over Alabama, Florida, Auburn, Texas).

For this four-team hypothetical, the Big Ten champion (either Ohio State or Minnesota) would also remain undefeated, along with ACC champion Clemson.

b) Oregon (current: No. 6 Playoff ranking) and Utah (No. 7 in CFP) would both need to lose before Dec. 8, thus diminishing the case for the Pac-12 champ crashing the Playoff party (for the first time since 2016).

However, the odds of this happening are rather remote, factoring in the easy remaining slates for the Ducks (vs. Arizona, @ Arizona State, vs. Oregon State) and Utes (vs. UCLA, at Arizona, vs. Colorado).

Outside of the above scenarios, the Pac-12 should be in the clear here for the No. 4 spot.

Which begs the question: With so much confidence in the Pac-12’s case, then how come Georgia and Alabama are seemingly a half-notch above Oregon and Utah?

That’s an easy one.

Let’s remember: The Playoff committee cannot reward the Ducks or Utes with extra bonus points for winning the conference crown … until either school’s official coronation on Dec. 6.