ELI MANNING: Say hello to this Hall of Fame shoo-in … sometime during the new decade 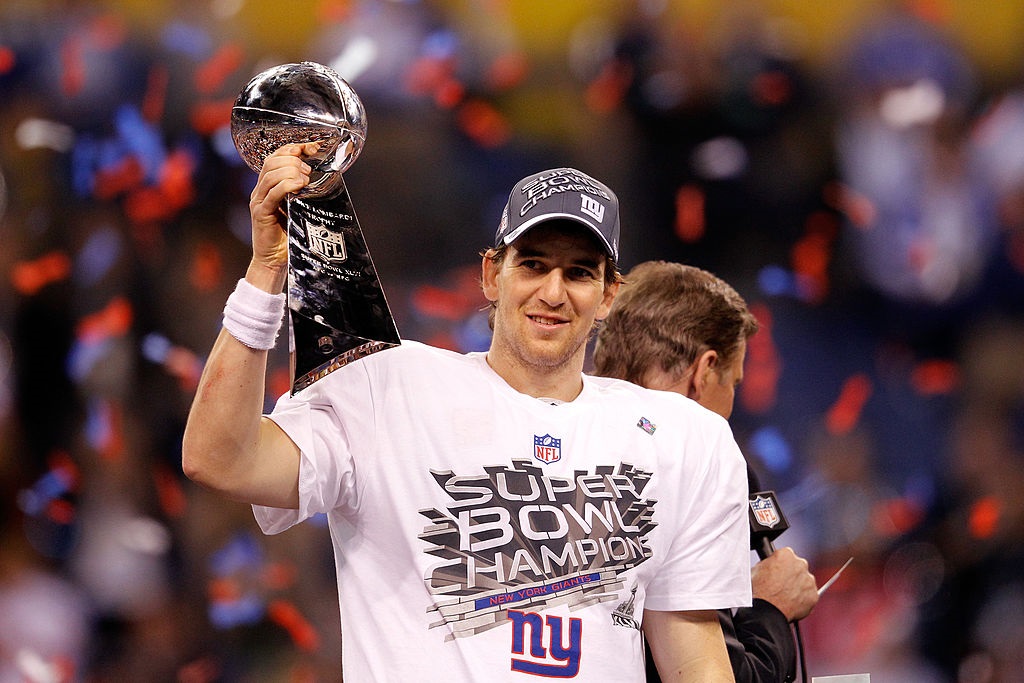 On Friday, quarterback Eli Manning will reportedly announce his retirement from the NFL, the culmination of a decorated 16-year career with the New York Giants.

The news of Manning’s announcement spurred a number of social-media tributes on Wednesday. By proxy, it also conjured up one of the most divergent debate topics of the last 12 years:

Is Eli Manning a reasonable lock for the Hall of Fame?

BATSBY Sports offers up five arguments for Manning garnering induction into Canton, sooner than later down the road.

At this moment, I would characterize 2004 as the second-greatest quarterback draft class in NFL history, with Eli Manning, Ben Roethlisberger and Philip Rivers headlining this watershed year for incoming passers.

Manning (1st overall), Rivers (4th) and Roethlisberger were all selected within the first 11 picks that spring; and from a numbers perspective, the three bankable stars amassed 55,000-plus passing yards and 370 touchdowns apiece.

Which begs the question: Who’s the best of this prolific trio?

**Big Ben and Eli each claimed two Super Bowl titles.
**Roethlisberger currently boasts the most career victories (144).
**Rivers seems like the best candidate for 70,000 passing yards.
**Big Ben has captured the most division titles (seven).
**Rivers has easily produced the most 4,000-yard passing seasons (11) … but it’s worth noting that, to date, Big Ben has been the only 2004 draftee to reach 5,000 yards in a single campaign (2018 season).

In fact, it would have been intriguing to see if Manning could have crossed the 60,000-yard threshold in 2020 … piloting a team in need of a short-term stopgap at quarterback.

Like it or not, Eli haters, but Manning’s connection to the New York media/advertising market will certainly pay off in six, seven or eight years, whenever the Hall of Fame voters officially ticket him for Canton.

For every game in Big Blue garb (at least when starting), Manning was a high-profile figure for a flagship NFL franchise; and he responded by posting the greatest numbers and collecting the most hardware of any other QB in Giants history.

Sure, if Eli had a surname of “Smith” instead of Manning, he’d probably be viewed in different circles by NFL fans and media alike.

However, that presumption cuts both ways.

For everyone who believes Eli has always profited from the Manning name, from being part of the First Family of Football History (Eli, Peyton and father Archie Manning) … what about the extreme pressure that was placed on him, upon entering the NFL as the No. 1 overall pick in 2004?

Actually, this might be a poor example, since Eli and Archie made a needless circus of the ’04 draft by refusing to play for the San Diego Chargers, thus forcing a passive-aggressive trade to the Giants (in exchange for the rights to Philip Rivers and a slew of draft picks).

But even if Manning had signed with the Chargers, the pressure to carry the franchise still would have been immense … because of his last name.

(Could you imagine Eli/Archie having the patience to wait two years behind future Hall of Famer Drew Brees in San Diego, similar to Rivers’ clipboard timeline in 2004/05?)

Over time, though, Eli would prove to be worth his weight in gold for the Giants. An absolute game-changer for the franchise.

And among this group of titans, only Plunkett stands as the only non-active or not-yet-eligible quarterback to miss out on Hall of Fame glory.

Is that a crime? Eh, judgment call. Even after the NFL drastically liberalized its rules for handling wide receivers downfield, Plunkett still never reached 3,000 yards passing in a given season.

Interestingly enough, Plunkett and Eli Manning both posted .500 records as career starters … and Hall of Famer Joe Namath had a lifetime record of 62-63 during his celebrated career.

Of course, Namath catapulted the 1968 New York Jets to the greatest upset in American football history (Super Bowl III win over the Baltimore Colts), a GUARANTEED victory that transformed the ultimate legacy of the old American Football League.

As for the second-greatest upset in NFL history? Look no further than Eli and the Giants taking down the 18-0 Patriots in Super Bowl XLII.

Manning owns a rock-solid postseason record of 8-4 as a starter, which looks great from any angle.

Career success aside, though, the seeds of Manning’s Canton candidacy were sown during the Super Bowl seasons of 2007 and 2011.

For the 2007 campaign, the Giants had the No. 6 seed (Wild Card #2), guaranteeing zero home games in the event of an extended postseason run.

And yet, this had no effect on New York’s January mindset, with the defense surrendering no more than 20 points with road outings against the Buccaneers, Cowboys (NFC’s No. 1 seed) and Packers (one of the coldest games in Lambeau Field history).

On offense, Manning complemented the 1-2 running punch of Ahmad Bradshaw and Brandon Jacobs (cumulative averages of 106 rushing yards/1.3 TDs versus Tampa Bay, Dallas, Green Bay) by accounting for four touchdowns and zero interceptions during this three-game run; and considering the blustery conditions (high winds/bone-chilling temperatures) for the Packers game at Lambeau, it’s a mini-miracle Eli passed for 251 yards and zero picks.

And for the Super Bowl, Manning threw for 255 yards and two touchdowns. Among the notable highlights: The iconic sack evasion/miracle third-down pass to David Tyree … and the eventual championship-clinching TD pass to Plaxico Burress in the final seconds.

For the 2011 playoffs, Manning was far more assertive on offense, averaging 308 yards passing and 2.7 touchdowns in victories over the Falcons (home), Packers (NFC’s No. 1 seed) and 49ers (road).

Unlike the 2007 postseason, Manning tossed one interception in a 2011 playoff game … but New York didn’t need Eli to be perfect on that night, just precise with the back-breaking Hail Mary touchdown to Hakeem Nicks right before halftime.

And for Super Bowl 46 in Indianapolis, during the final crunch-time moments, Manning’s absurdly accurate sideline pass to Mario Manningham positioned the Giants for another landmark upset of the Patriots.

In fact, think about it:

Eli Manning might have been the No. 1 reason why Tom Brady only has six world championships (as opposed to eight!) and never followed through on the first 19-0 season in NFL history.

In the eyes of Hall of Fame voters, that’s a source of ‘Eli extra credit’ that can never be doled out again, among future Canton candidates.