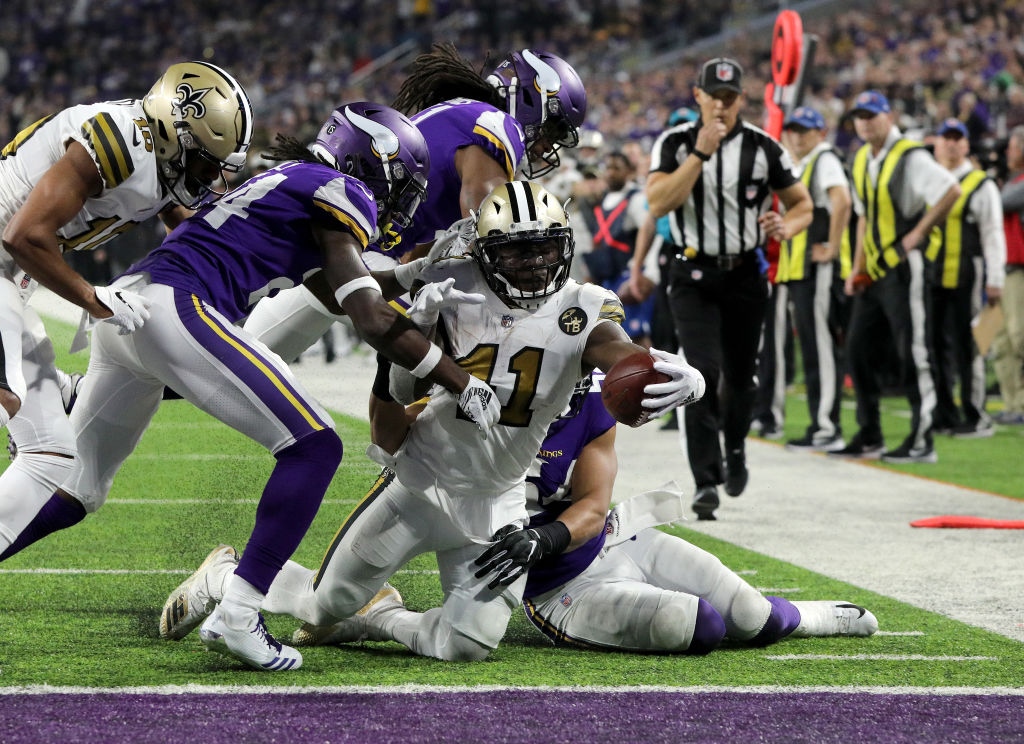 On Thursday, I put myself through a fun, but eminently stressful period of draft chaos, executing three simultaneous mock drafts (12 teams/PPR scoring) — while holding the No. 8 pick each time.

Adding to the cool absurdity of this annual exercise, we then stepped up the degree of difficulty with the following limitations:

b) I wasn’t allowed to ‘queue’ up any players in advance. The reasoning: Amid this brain-rattling torrent of being on the clock multiple times inside 30 seconds … Pressure makes diamonds.

In 2019, McCaffrey established a new single-season record for tailbacks (116 catches) and notched 14 different outings of 130 total yards and/or one touchdown.

OBSERVATION #2
In case you’re wondering … Saquon Barkley and Alvin Kamara were the only other top-3 players selected in the three drafts (mixed orders).

Here’s the mild downside of the above occurrence:

The Giants’ early gauntlet of foes (citing 2019 defensive stats) include:

The University of Tennessee product incurred a seismic dip in touchdown production last year, plunging from 18 scores in 2018 (with Mark Ingram sharing time in the backfield) to merely six TDs in 2019.

OBSERVATION #3
DeAndre Hopkins (my No. 3 PPR wideout) and Davante Adams (No. 4 receiver) were available at No. 8 overall in all three drafts; and since their rankings are virtually identical, it made sense to diversify this 50-50 coin toss with Hopkins in two drafts … and Adams in the other.

For those who favor Adams, though, here’s something to behold:

To secure the QB-WR handcuff of Hopkins and Cardinals QB Kyler Murray, it’ll probably take a Round 5 or 6 commitment on the back end.

However, for the Adams-Aaron Rodgers handcuff … fantasy GMs can confidently wait until Rounds 9-11 to pull the trigger on Rodgers — likely because the future Hall of Famer hasn’t eclipsed 30 touchdowns since the 2016 season.

That said, you’ll still appreciate the Round 10 value of a guy who’s a healthy shoo-in for 4,000 yards passing and 28 TDs.

OBSERVATION #4
One more thing: In all three mock drafts, Adams — with last year’s 12-game numbers extrapolating to 111 catches, 170 targets, 1,330 yards, 6.7 TDs for 16 outings — ended up as the second wideout off the board (after Michael Thomas).

OBSERVATION #5
Reigning NFL MVP Lamar Jackson (4,333 total yards, 43 TDs last season) was the first quarterback selected in all three mocks; and the range was super-tight, with Jackson being tagged as picks one, two and three in Round 3.

As such, there are two ways to interpret our positional ranking for 2020 (No. 2 receiver):

OBSERVATION #7
It’s damn-near impossible to explain the fantasy disrespect coming Raheem Mostert’s way, without the benefit of any preseason games … or even a concrete depth chart from the 49ers coaches (at the time of this writing).

Citing his final nine games last year (including the playoffs), Mostert accounted for 13 total touchdowns … without toting more than 20 carries in a single outing; and during that prolific span, Mostert held sublime averages of 95.4 total yards and 1.4 TDs.

And yet, Mostert can incredibly be yours in Round 6 … pretty much like clockwork. Unreal.

OBSERVATION #8
I haven’t dedicated much editorial space to David Montgomery this offseason; and yet, the Bears tailback was happily snagged in all three mocks.

****Tallied six outings of 90 total yards and/or one touchdown.

OBSERVATION #9
Dallas Goedert (58 catches, 607 yards, 5 TDs last year) might be a TE2 in Philly, but he’s also a standout asset for the latter rounds of all three drafts.

In 2019, Goedert was one of only nine NFL tight ends to collect eight-plus games of seven targets AND notch seven outings of six catches, 80 yards and/or one one touchdown.

But check this out:

For all three simultaneous mocks, the Chiefs’ Edwards-Helaire (replacing Damien Williams — who opted out of the 2020 campaign) went off the board three times in Round 1 … fifth, seventh and 11th overall.

In other words … good luck at snagging the explosive Edwards-Helaire in the sleeper neighborhood of rookie draftees.

PrevPreviousFANTASY FOOTBALL: The results of our ‘Noah’s Ark’ mock draft … in terms of grabbing everything in bulk
NextCOLLEGE FOOTBALL: Breaking down the SEC’s updated and enhanced master schedule for 2020Next