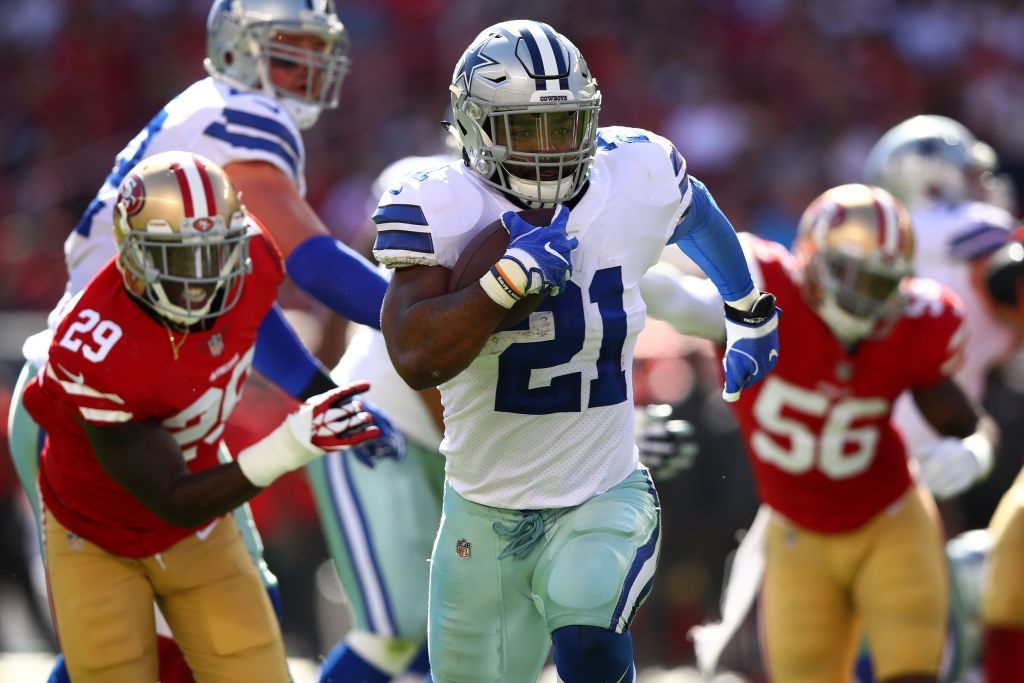 Charting the tailback tandem’s last 44 combined NFL , including the playoffs, Barkley (2,028 total yards, 15 TDs as a rookie) and Elliott (three straight NFL rushing crowns) are absurdly responsible for 41 outings of 100 total yards and/or one touchdown.

So, in that vein, who cares if Elliott (ended holdout on Wednesday) logs only 20-25 reps for Dallas this weekend?

Or, who cares if the Giants’ passing could be in tatters without Golden Tate (four-game PED suspension) during the month of September?

The odds of Barkley and Elliott impacting the fantasyworld in Week 1 remain astronomically high.

FUN FACT #2
Packers wideout Davante Adams’ four games against the Vikings and Bears could have major consequences in fantasyland.

Green Bay opens the season against Chicago (road) and Minnesota (home) … and then faces the Bears and Vikings again for Weeks 15 and 16 — universally the semifinal and final rounds of the fantasy playoffs.

Which brings us to this: Charting his last eight outings against Chicago and Minnesota, Adams has been a perfect 8 for 8 in amassing 100 yards receiving and/or scoring one touchdown.

Here’s one more thing to celebrate: Last season, Adams was the lone NFL wideout to reach the elite-level threshold of seven catches, 95 yards and/or one touchdown in 15 different games. That’s the definition of bedrock consistency.

FUN FACT #3
Rams quarterback Jared Goff (60 total touchdowns since 2017) might be the highest-paid player in NFL history (at least for this week), but he’s hardly a lock for big-time fantasy numbers against the Panthers.

Charting his five career outings in the Eastern Time Zone, including the Super Bowl debacle from last February, Goff owns painfully ordinary averages of 205 yards passing and 1.4 touchdowns per game.

Of equal importance, during this stretch, Hopkins (24 TDs since 2017) racked up 100 yards receiving and/or one touchdown eight times.

FUN FACT #5
How’s this for an odd streak: The Falcons and Vikings have squared off eight times during the month of September since 1966 … and Minnesota owns a perfect 8-0 mark for that time span.

Of the eight September outings, the Vikings’ average margin of victory also comes to 15.3 points.

FUN FACT #6
Go ahead and bet the farm on Lions tailback Kerryon Johnson racking up monster fantasy numbers on Sunday.

What’s more, citing his final eight games as a rookie last year, Johnson stealthily averaged 94 total yards and 0.5 touchdowns per outing — supreme numbers for someone who merely averaged 16 touches during this prolific stretch.

FUN FACT #7
It’s difficult to predict how Odell Beckham Jr. will fare with the Browns early on, given the change in environment and Cleveland’s deep arsenal of playmakers.

However, here’s something that can be neatly extrapolated for the future:

FUN FACT #8
Tight end Hunter Henry (torn ACL last year) has likely been counting down the seconds until the Chargers-Colts clash on Sunday afternoon; and for good reason:

What’s more, in his only career meeting with the Colts, Henry (9 TDs as a rookie) notched a perfect catch-to-target ratio (5 for 5).

This kind of success could replicate itself on opening weekend, with Mixon facing a Seahawks defense that posted bottom-10 tallies with targets, catches, receiving yards and receiving TDs allowed to opposing tailbacks last season.

FUN FACT #10
In lieu of Antonio Brown’s high-profile exodus from Pittsburgh, the Steelers subsequently CLAIM that no playmaker will log the vast majority of touches/carries this season … but we’re calling b.s. on such a statement.

As Pittsburgh’s No. 2 wideout last year (behind Brown), JuJu Smith-Schuster (111 catches, 1,426 yards, 7 TDs) was just one of three NFL wideouts to post 13 or more games of eight-plus targets.

The other wide receivers on that list: Julio Jones and Davante Adams.

FUN FACT #11
The Jaguars might have a top-five defense in fantasyland, but they’re hardly an impenetrable force in one respect.

Charting his last 28 games, including the playoffs, Kelce has easily reached the elite-level threshold of seven catches, 95 yards and/or one touchdown 21 times; and this includes a five-catch, 100-yard performance against the Jaguars last October.

FUN FACT #12
Jaguars wideout Dede Westbrook (career highs with catches, targets, yards and TDs in 2018) should be an excellent sleeper candidate in Week 1, taking on a Chiefs defense that recently ranked dead-last in passing yards allowed.

Of course, there’s a significant hurdle to clear regarding this week’s matchup:

Charting his last four outings against the Bills, Anderson has notched only four receptions each time (with two total touchdowns).

That’s hardly the track record of an undisputed WR1.

FUN FACT #15
There are three certainties in life: Death, taxes … and Drew Brees carving up AFC South opponents at home.

Citing his last five Superdome outings versus the AFC South, the future Hall of Famer owns staggering averages of 408 yards passing and 3.6 touchdowns.

The fun doesn’t end there, though.