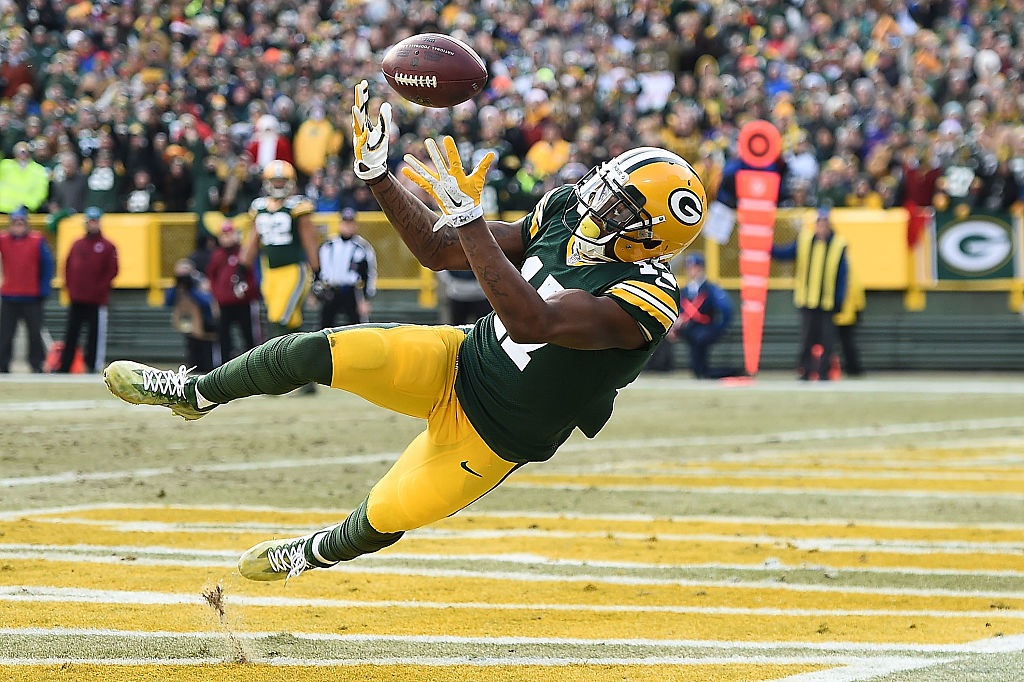 On Thursday afternoon, I put myself through another fun, but stressful period of draft chaos, executing three mock drafts at the same time (12 teams/PPR scoring) — while holding the No. 9 pick in each drill.

b) I wasn’t permitted to ‘queue’ up any players in advance. The reasoning: Amid this brain-rattling torrent of being on the clock multiple times inside 30 seconds … pressure makes diamonds.

It wasn’t my intention to snag Davante Adams with all three Round 1 choices, given BATSBY’s similarly stellar devotion to Austin Ekeler and Antonio Gibson this summer.

However, the 9th slot simply presents too much value for Adams in PPR leagues, when factoring in the following numbers:

**The Packers star (entering the final year of his contract) ranks second overall, among wideouts, in total touchdowns over the last three seasons (36) — trailing only Tyreek Hil (37).

For what it’s worth, I had the opportunity to land Bills wideout Stefon Diggs at 14th overall for all three mock drafts.

Why the consistent bypass of Diggs, our No. 4 wideout for the preseason?

**Diggs collected only 21 red-zone targets over the previous two seasons (Bills, Vikings). He also couldn’t crack the top 15 in red-zone touchdowns during the same two-year span.

So, in that vein, there’s some dual trepidation about his No. 10 positional ranking … and assuredly grabbing Gibson in Round 2.

On the flip side, for Weeks 2-12 (spanning 10 games), Gibson reached the elite-level threshold of 100 total yards and/or one TD eight times … while racking up 11 touchdowns during this prolific period.

I fully acknowledge that Round 5’s a tad high for rookie rusher Javonte Williams, especially before Denver’s preseason opener.

So, why reach at the same spot for the same person at all three drafts? Pretty simple.

With Mike Davis (my No. 18 tailback), Raheem Mostert (ranked No. 19), Ronald Jones (ranked No. 28) and David Johnson (No. 29) consistently falling to Rounds 6-9, it makes sense to REACH for the high-upside Williams in Round 5, knowing he’ll likely commandeer the Broncos’ RB1 role, sooner than later.

It’s a simple proposition: Either Darren Waller (the other Tier I tight end for 2021) gets corralled in Round 3 … or I won’t consider another tight end until Round 8, at the earliest.

In 2020, Waller enjoyed nine outings of six-plus receptions, nine efforts of eight-plus targets and four games of 100-plus yards receiving. The highlight of this prolific season: Carving the Jets up for 13 catches, 17 targets, 200 yards and two touchdowns.

Digging deeper, Waller ranked first (along with Travis Kelce) last year with 14 games of six or more targets. He also finished second (behind Kelce) with 12 games of seven catches, 80 yards and/or one touchdown.

In terms of differentiation for this exercise, BATSBY selected three different defenses (Bucs, Packers, Steelers); but make no mistake, come Draft Day, the focus will be on landing the Steelers in Round 11 or 12.

a) The Steelers were the only D/ST club to enjoy a top-3 ranking with sacks, interceptions, defensive TDs last season.

b) Pittsburgh has Bud Dupree back from injury, the same Kentucky product who has cumulatively tallied 24 tackles for losses, 24.5 sacks and 45 QB hits over the last three seasons (2018-20).

There isn’t much wisdom in taking Rashaad Penny as my RB5 in Round 15.

Despite his first-round status in 2018, Penny has been a nonfactor in fantasyland, failing to crack 1,000 total yards for his career. The six touchdowns doesn’t inspire much projectable confidence, either.

So, why take the low-cost flier on Penny?

The kid’s only 25 years old and possesses a speed-power combination that has no equal among the Seahawks backs, including Chris Carson.

Or put another way, Penny likely has one week to prove himself … before being replaced by an out-of-nowehere star from the NFL’s opening weekend, via free agency.

PrevPreviousFANTASY FOOTBALL: ‘PPR Spectacular’ — How to dominate your August fantasy draft … without really trying
NextFANTASY FOOTBALL: 10 preferred ‘sleeper’ candidates to target in Round 8 or higher of PPR draftsNext