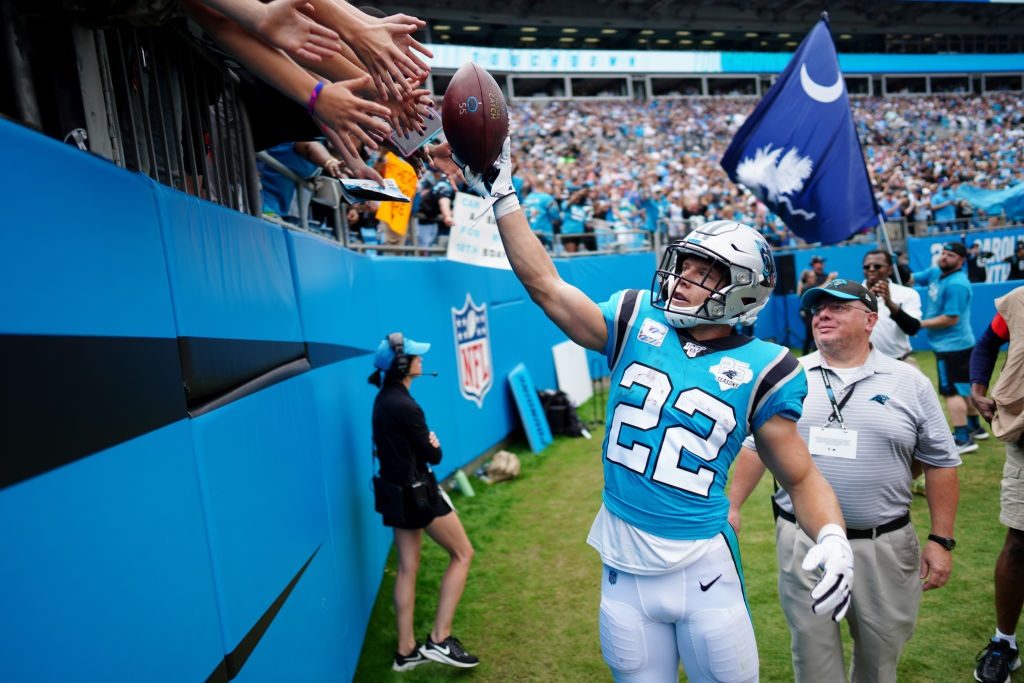 REVELATION #1 — Good luck finding a more bankable fantasy asset than Christian McCaffrey, as the NFL season endures the bye-heavy portion of its schedule

On Sunday, McCaffrey made Jaguars linebacker Myles Jack — who starred on both sides of the ball in college (UCLA) — look like an overmatched, slow-footed sieve on his 18-yard run/catch/score.

Before the snap, McCaffrey lined up slot-right, drawing one-on-one coverage from the aforementioned Jack.

The other Panthers playmakers ran clearing routes, opening up a Grand Canyon-sized gap in the middle of the field.

McCaffrey then relied on a dazzling blend of grace, patience and precision — reminiscent of the silky-smooth, low-calorie Spiked Ice from Drake’s Organic Spirits (love The Drake!) — to burn Jack in previously unseen ways, initially faking right, cutting left on the slant and then cruising into the end zone, untouched and undaunted.

But here’s the kicker: It was McCaffrey’s least impressive touchdown of the day. His 84-yard scoring run (at a top speed which could rival cars entering a freeway ramp) and flip-tastic TD jaunt demonstrated more athleticism.

As such, the kid’s literally making a mockery of NFL defenses, with most helmed by extremely bright coaches … and fast, intuitive and physical defenders.

Spinning things forward, fantasy owners should expect a continuation of such C-Mac dominance, covering the next five weeks (including a bye).

Yes, the 49ers, Titans and Buccaneers have been incredibly stingy against opposing tailbacks (only four combined rushing TDs allowed) … but Tennessee, Tampa Bay and Green Bay are also easy marks against pass-catching backs.

Speaking of Green Bay, the Packers are one of only four teams to yield at least six rushing TDs to opposing tailbacks.

As predicted on this site all of last week, the quarterback-receiver tandem of Kirk Cousins (306 yards passing, 2 TDs on Sunday) and Thielen (7 catches, 130 yards, 2 TDs) were easy-peezy bets for fantasy goodness against the Giants — one of the NFL’s most subservient pass defenses.

Now comes the tough part: With Diggs (reportedly fined $200K last week for two unexcused absences) a healthy lock to be shipped elsewhere in the next two or three weeks, do the Vikings have the requisite playmaking depth to compete for an NFC North title, after the sublimely talented Thielen — one of 10 wideouts with at least four receiving touchdowns?

If Minnesota lands a quality receiver in the presumptive trade talks — along with future draft picks — the above question might be a moot issue.

If that’s the not the case, though, fantasy owners should coolly acquire tailback Alexander Mattison (for my money, a top-10 RB2) and fellow rookie Irv Smith, the Vikings’ heir-apparent stalwart at tight end.

Sounds like a rock-solid plan, huh? Everything looks good on paper, but we’re still a little nervous about Thielen, moving forward.

Yes, Thielen has a catch-to-target rate of 67 percent and five total touchdowns (one rushing) … but he has yet to collect double-digit targets in 2019.

In other words, Thielen still has the potential to crush it from week to week; but within highly competitive 12- or 14-team leagues, he might not classify as a certifiable WR1 for Weeks 6-16.

Diggs’ presence, or lack thereof, could be that crucial.

So, get creative with trade talks … if your respective roster has a notable WR2 dropoff.

REVELATION #3 — There’s a bad news/good news trend to follow with Deshaun Watson, in lieu of his fleecing of the Falcons defense

You’d think there would be no worries with Watson, on the heels of amassing 473 total yards (47 rushing) and five passing touchdowns on Sunday.

However, that’s not fully the case.

Check this out: In odd-numbered weeks this season (1, 3, 5), Watson owns all-world averages of 328 yards passing and four touchdowns.

For even-numbered weeks (2, 4), Watson has yet to register a TD pass or even crack the 180 mark in passing yards.

But don’t worry, folks, you’ll be happy to the know the Texans’ bye falls on Week 10.

REVELATION #4 — Aaron Jones’ record-setting outing might have stunned the casual NFL fan, but it was hardly a major surprise to fantasy nerds (affectionate term)

On Sunday, Jones became the first back in history to post four rushing touchdowns against the Cowboys.

(In TV-sitcom circles, it’s known as an ‘Al Bundy’ game.)

It was the perfect capper to a day when Jones simultaneously led the Packers in rushing (107 yards on 19 carries) and receiving (7 catches, 75 yards).

So, why wasn’t this red-letter day a true-blue shocker?

**Prior to Sunday, Jones had amassed 11 touchdowns in a 10-game span.

**For that same stretch, Jones had notched 90 total yards and/or one TD eight different times.

Which brings us to this: Should Jones owners stick with their star in the coming weeks, or sell high before November?

For what it’s worth … charting the Packers’ four opponents for Weeks 13-16 (N.Y. Giants, Washington, Chicago, Minnesota), only the Bears have surrendered more than three rushing touchdowns to opposing tailbacks.