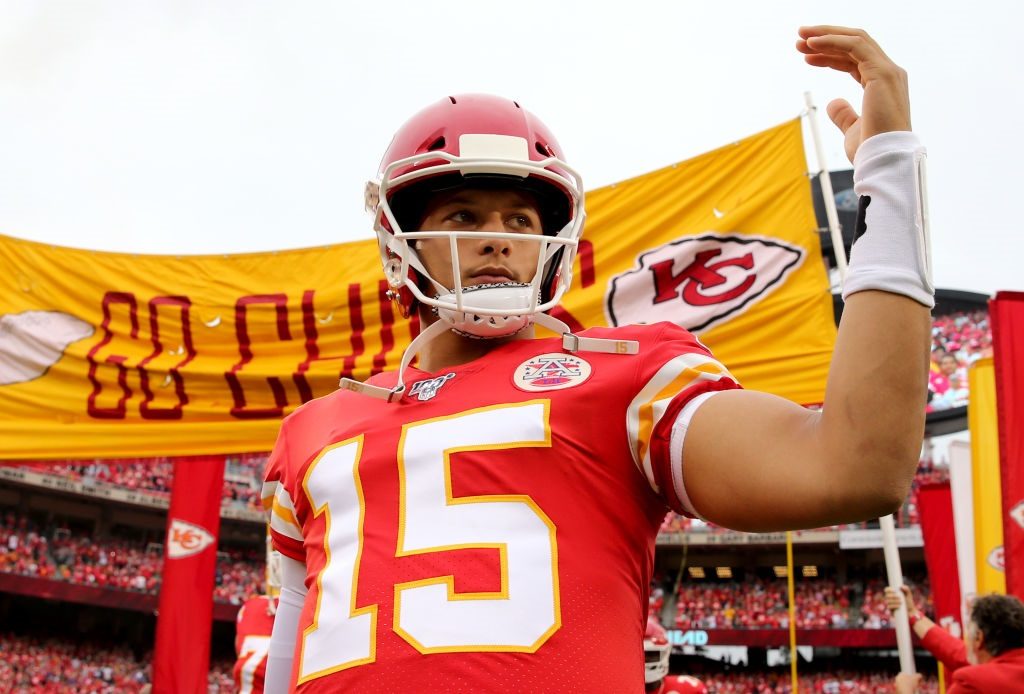 Did you like Mahomes’ scintillating performance of 374 yards passing and three touchdowns against the Ravens?

Well, get used to it for the next 10 weeks (minus Kansas City’s bye), as the reigning MVP makes a mockery of professional defenses and literally carries fantasy teams to their respective playoffs.

Charting his last nine regular-season outings, Mahomes holds staggering averages of 349 yards passing and 3.2 touchdowns; and during this prolific stretch, there were even three, uh, clunkers of 240-plus passing yards and multiple scores.

We should all be pleased-as-punch with the Mahomes definition of a clunker. If you’re a Baker Mayfield owner (just three TDs on the season), you’d be thrilled with averaging 266 yards passing and two touchdowns.

Speaking of middling performances, don’t expect Mahomes to scrape the bottom of the barrel during October and November. Of the Chiefs’ next nine opponents, only the Titans (6th) and Broncos (5th) boast elite-level standing against the pass.

(The Lions have held opposing QBs to a deflating completion rate of 54.7 percent … but we’re expecting Mahomes to obliterate that low threshold on Sunday.)

As such, we might as well pencil in Mahomes (1,195 yards passing, 10 TDs for the season) for weekly averages of 345 yards passing and 3.3 touchdowns until Week 13 (vs. Oakland), while he reaps the benefits of being fortified by a supreme offensive line (how clean were those pockets versus Baltimore?), the NFL’s best tight end (Travis Kelce), a deep corps of tailbacks (Damien Williams, LeSean McCoy, Darrel Williams, Darwin Thompson) and the fastest group of pass-catchers in the business.

Now for the so-so news: Fantasy owners might want to ponder selling high on Mahomes sometime after the Halloween holiday.

For Weeks 14, 15 and 16, traditionally the fantasy playoff weeks, Mahomes draws the Patriots (road), Broncos (home) and Bears (road) — all stifling defenses against the pass.

Plus, for all three outings, there’s a chance that cold rain, heavy winds and even snow can wreak havoc on the field.

Browns coach Freddie Kitchens isn’t the only football aficionado who wants ‘to kick himself in the ass’ today.

On Saturday, I had a golden shot at a buy-low trade for Evans — knowing he’d light up the Giants’ pedestrian defense 24 hours later — but pulled out due to the increasing uncertainty surrounding Melvin Gordon.

And sure enough, I was full of regret within the first five minutes of Sunday’s classic game; and all told, Evans shredded the Giants defense for eight catches, 190 yards and three touchdowns.

Don’t forget, it easily could have been four scores, if Bucs quarterback Jameis Winston had found Evans perfectly in stride on a 55-yard rainbow reception (the ball hung in the air too long).

Cold feet from Saturday aside, here are three strong reasons to make a trade play for Evans, sooner than later:

a) Evans (five straight 1,000-yard seasons from 2014-18) has collected eight-plus targets 15 times in his last 22 games; and this trend will most certainly continue in Bruce Arians’ vertical-friendly offense.

b) affected Evans’ status in the first two weeks; but none of that mattered on Sunday, with the Bucs wideout carving up the Giants secondary. By all accounts, he’s at full speed once again.

The lone exception could be at Seattle (Nov. 3).

ESPN’s Adam Schefter believes the return timeline for Barkley’s high-ankle sprain might be closer to eight weeks than four. If that’s the case, Barkley owners need to internalize two questions:

Is it worth rostering Barkley for the next two months, with no guarantee of a November/December return? Especially with fantasy clubs that won’t be cruising to the playoffs?

Obviously, Barkley’s a competitive guy, who’ll work his butt off to return to the lineup. But what if the Giants take that decision out of his hands? What if New York’s staring at a 3-7 record in two months, and opt to limit or even shut down Barkley for the remainder of the year?

Yes, Daniel Jones had a spectacular starting debut on Sunday, accounting for 300-plus passing yards and four touchdowns, while leading his club to an epic comeback win over the Buccaneers.

However, even with such heroics, the Giants are still in the early-to-middle stages of a lengthy rebuild. Rushing Barkley back during a so-called ‘lost’ might not make a ton of sense around the Thanksgiving holiday.

On the flip side … we’re not encouraging Barkley owners to conduct a fire sale this week. We’re merely floating a balloon to the other owners, in terms of reading the marketplace on a potential blockbuster deal.

As the Giants’ primary rusher in 2017, the rookie Gallman had a particularly fruitful December, modestly averaging 80 total yards, 6.3 catches and eight targets during a three-week span.

It’s a small sample size … but it also represents fleeting hope of Gallman being a weekly flex consideration over the next two months.

4) John Ross’ owners should invoke a simple saying when dealing with the enigmatic receiver: ‘Start or get off the pot’

Yes, Buffalo’s numbers against opposing wideouts had been rather mediocre in September; and Ross had been the top-ranked receiver in fantasyland after two weeks, rolling for 11 catches, 20 targets, 270 yards and three touchdowns.

But I still knew the clunkers would come in relatively short ; and that’s exactly how things played out in Week 3, with Auden Tate (6 catches, 88 yards) and Tyler Boyd (6 catches, 67 yards) commanding double-digit targets apiece … and Ross collecting a measly two points in PPR leagues.

Does this make me want to dump Ross?

Absolutely not. This kid serves as the very definition of a boom-or-bust asset in fantasy, meaning we must take the bad with the good during a long season.

Otherwise, there’s really no point in owning Ross. He has too much upside to ride the bench for long stretches of the year.

Bottom line: If you covet a safe option for the No. 4 or 5 wideout, Ross isn’t a player worth targeting. He’ll break your heart at least 6-7 times during the season; but for the other 8-10 games, look the freak out.

With his combination of blinding speed, change-of-pace quickness and deceptive route-running acumen, Ross has the capacity for 150 yards and one touchdown every Sunday.

He’s also an ideal fit for the Bengals’ pass-friendly spread offense, although we’d argue Ross is more dangerous with A.J. Green in the Cincinnati lineup.

That theory will soon be put to the test, with Green (summertime ankle injury) approaching an October return.

Best-case scenario: With everyone healthy, and tailback Joe Mixon pounding the rock on inside runs, Ross doesn’t encounter any double-team coverage in October, November or December.

And that should scare the heck out of opposing defenses … along with the fantasy owners who live in fear of Ross disappearing from the stat sheet, with no prior warning.

But it’s certainly worth the risk. Either start Ross every week, with the full knowledge that he’s a flight risk, or move onto the guys with healthy target rates (Robert Woods, Allen Robinson, Cole Beasley) … but don’t necessarily catch fire with finding the end zone.

PrevPreviousNFL: The Daniel Jones ‘A Star Is Born’ hype in New York City is real … unless it isn’t
NextFANTASY FOOTBALL: Top 30 waiver-wire pickups heading into NFL Week 4Next