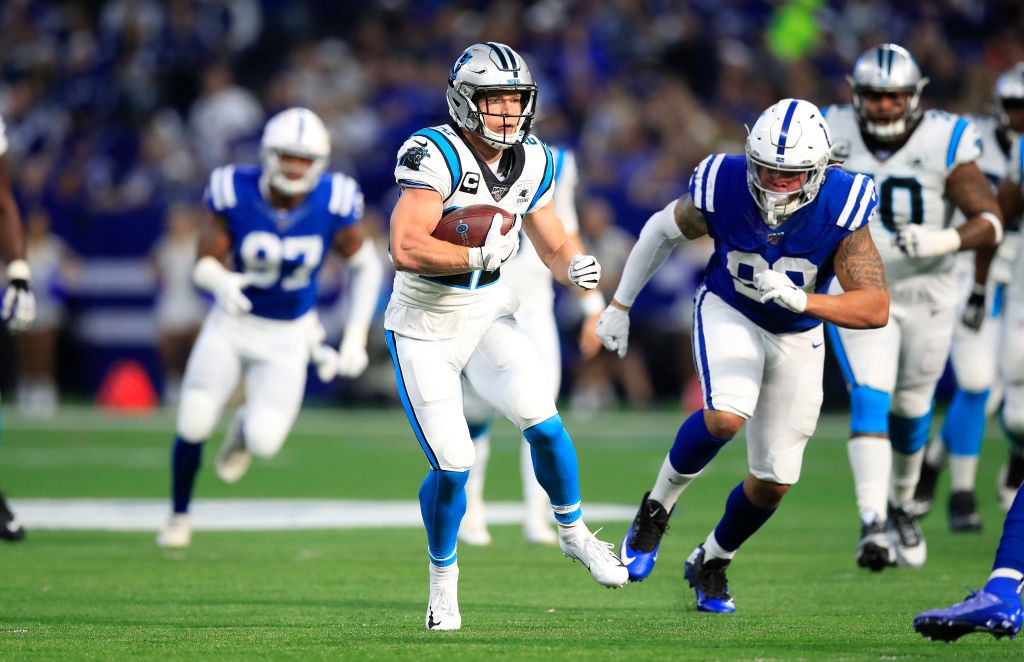 If 2020 were a typical football summer, instead of the logistical Year From Hell, we likely would’t have the time or interest in doing LIVE mock drafts before training camps launch in late July.

Instead, we had plenty of hourly openings on our Monday schedule for this week, and begrudgingly got sucked into a live mock draft, via ESPN.com.

For this 12-team faux league with PPR rules, we were the last owner in the draft room. As such, we ended up with the No. 2 slot, which comes with its own unique challenges for Rounds 2-5.

Not that we’re complaining with the final results.

a) File this under ‘C’ for Curveball.

I had Dalvin Cook all queued at No. 2 overall, given his prodigious track record and eminently doable schedule for the 2020 campaign (many porous rush defenses).

However, things changed for the better in a flash, once the guy drafting 1-1 opted for Saquon Barkley over McCaffrey — last year’s runaway choice for Fantasy MVP honors … the happy result of 2,392 scrimmage yards, 19 touchdowns and 116 receptions (NFL single-season record for tailback catches).

McCaffrey’s fortuitous owners from last August, many of whom scooped C-Mac up at picks 4-6 in Round 1, supremely benefited from his otherworldly production and bedrock consistency, accounting for 130 total yards and/or one touchdown 14 times.

b) Which brings us to this …

Of his final 11 games last season, none of which featured Cam Newton as the Panthers’ starting quarterback, Moore accounted for nine outings of eight-plus targets, eight efforts of six-plus catches, four 100-yard games and three TDs.

c) For the record, I loathe being the first or second owner to draft a quarterback, given the absurd depth at this position.

However, who among us can resist the notion of snagging the two best fantasy superstars from last year — McCaffrey and Lamar Jackson, the reigning NFL MVP who rolled for 4,300-plus total yards and 43 touchdowns (seven rushing)?

Not bad for a guy who’s still feeling his way through the NFL.

Fast forward to the present: Conner easily deserves the benefit of the doubt in Round 5, based on a 2018 track record of 11 outings of 95 total yards and/or one touchdown 11 times.

There were also five games of multiple TDs for that dream campaign.

e) Charting his 10 greatest games with Deshaun Watson as the Texans’ starting quarterback (dating back to 2017), Will Fuller boasts staggering averages of 5.6 catches, 102 yards and 1.4 TDs per outing.

f) Let’s be honest here: Raheem Mostert’s trade request (through his agent) has artificially decreased his draft value in July, even though we’re 99.99-percent positive the Niners won’t be trading him in August.

So, for the time being, we’ll revel in Mostert’s absurdly low value, knowing it’ll naturally go back up during the preseason games.

And during this prolific span, Mostert held sublime averages of 95.4 total yards and 1.4 TDs.

g) I’m operating under the assumption of Mack being the Colts’ go-to back for Week 1, with Wisconsin rookie Jonathan Taylor serving as the backup rusher.

That production might flatten a bit this season … in anticipation of the Cardinals rolling for 40-plus touchdowns.

i) How’s this for upside with the last selection:

On the down side, given how a number of our playmakers also share a Week 8 bye … it’s entirely plausible that Sims might never earn a starting spot — even as a flex option — in the first seven weeks.

Unless there’s a major breakout.

Last but not least …

j) We’re willing to take an upside-based gamble on Jerry Jeudy (143rd spot), in hopes the Broncos rookie quickly lives up to the immense expectations.

It also helps that I’ve been an ardent Jeudy supporter since Day 1 of his Alabama tenure.

Come August, though, the days of Jeudy wearing the label of a WR4 or WR5 in highly competitive PPR leagues will likely be numbered.

PrevPreviousMLB: A 5-year analysis of each National League club’s 60-game start since 2015
NextNUMBERS GAME: A Fun Facts-style breakdown of the NFL’s 2020 scheduleNext