FLEX MESS: Packers-Niners showdown could be a logistical TV problem for ratings-obsessed NFL 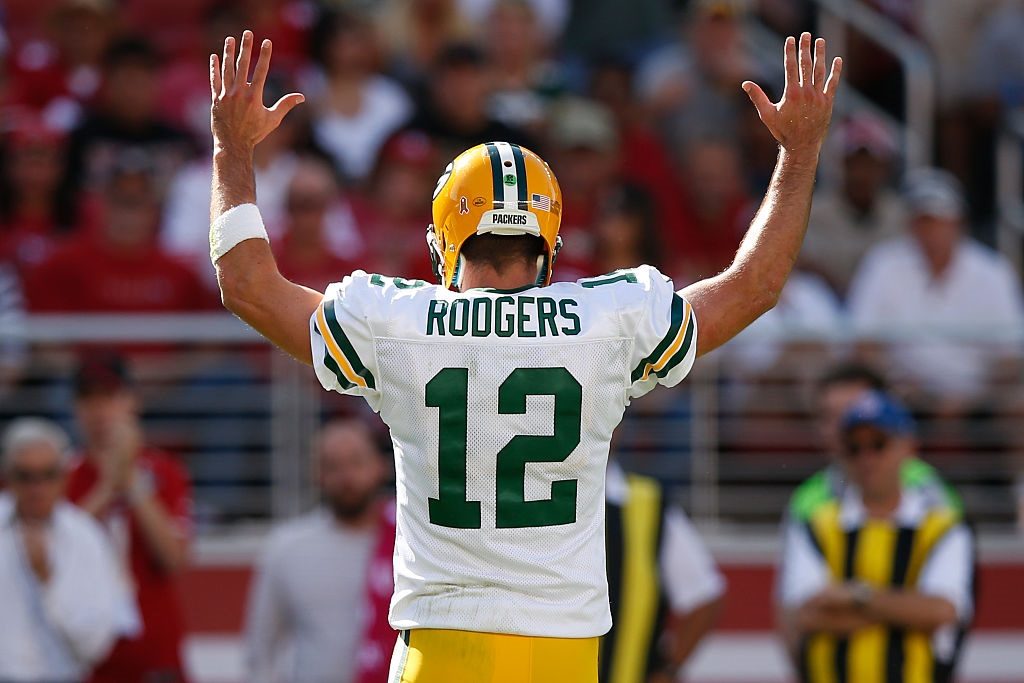 The NFL will likely have an interesting or even distressing dilemma on its hands for Week 12, and it has nothing to do with the omnipresent specter of inclement weather in late November.

For the Sunday-Monday slate of Nov. 24-25, just a few days before the Thanksgiving holiday, there’s a good chance of Packers @ Niners — potentially the NFC Game of the Year — being relegated to second billing during the 4:25 p.m. window of games.

How would that be possible, particularly if Green Bay (currently 7-1) and San Francisco (7-0) owned combined records of 19-1 heading into this high-stakes clash?

Well, as luck (or devoid of luck) would have it, FOX TV has presumably committed to Cowboys @ Patriots serving as the national game for that day (4:25 kickoff time), meaning the No. 1 crew of Joe Buck, Troy Aikman and Erin Andrews will be in Foxborough, chronicling arguably the NFL’s most popular teams worldwide.

And given how Packers-49ers will take place on the West Coast — and not in Green Bay — the league’s hands are essentially tied for moving the game to a more exclusive time window.

In other words, unless you have NFL Red Zone, it might be implausible to catch one of the year’s showcase battles on live TV. Especially for those living in the Eastern Time Zone.

The rationale back then: The league wanted heightened flexibility with the season’s best matchups, possessing the power to maximize certain games for mass consumption. For example, stealthily swapping out less-flattering games in a more advantageous TV window (read: primetime).

For the ensuing years, the NFL tweaked the process even more, offering flexibility for games in the 1 and 4 p.m. windows on Sundays (after Week 10).

It’s worth noting: Primetime games on Thursday and Monday cannot be subject to flex swaps. Also, the league doesn’t move around matchups to different weekends … unless weather dictates such an extremely rare move.

(The most recent example: Back in 2017, Dolphins vs. Bucs was moved from Week 1 to Week 11, due to the effects or Hurricane Irma.)

In other words, flex scheduling primarily involves Sunday games … minus one notable exception that we’ll address down the page.

For most weeks during November and December, the NFL powers-that-be wouldn’t think twice about bumping Packers @ Niners from the 4:25 window to NBC’s Sunday Night Football — TV’s top-ranked primetime show for the last decade.

But Week 12 already has a promising matchup on the SNF docket — Seattle @ Philadelphia — featuring one of the NFL’s most popular quarterbacks (Russell Wilson), one of the highest-paid QBs (Carson Wentz) and a flagship franchise from a monster TV market in the northeast (Eagles).

Now, if the 4-4 Eagles should lose to the Bears at home this Sunday, the NFL might execute the Packers-Niners/Seahawks-Eagles swap on the fly. (The league must execute all ‘flex’ changes no less than 12 days before that kickoff.)

However, if Philly rolls to 5-4 and stays within shouting distance of Dallas (currently 4-3) in the NFC East race, league executives might be leery of dropping the Eagles and Seahawks — two playoff contenders — from the prime-time slate..

On the flip side, the Packers have Aaron Rodgers (first-half MVP candidate: 2,324 yards passing, 17 TDs) piloting their robust offense (7th overall in scoring) … and the 49ers boast top-3 rankings for both scoring defense (2nd overall) and scoring offense (3rd overall).

XMAS SATURDAY: CHOOSE YOUR OWN ADVENTURE

For the first time ever, excluding games played on Christmas Eve, the NFL will offer a flex-time triple-header on the Saturday of Week 16 (Dec. 21).

Here are the five candidates for the Saturday trio of nationally televised outings:

For starters, let’s safely assume that Rams-Niners and Bills-Patriots make the cut, given the winning records for all.

This leaves Lions-Broncos, Texans-Buccaneers and Raiders-Chargers fighting it out for the third spot.

And since the NFL must make a decision in the near future, it’s imperative for the Broncos, Bucs and Chargers to creep closer to .500, or risk quietly falling back into the normal slate of Sunday games (Dec. 22).

Assuming all three home teams don’t fall completely off the map, weather could play a huge role in choosing the tripleheader.

**If the league wants sunshine and high scoring (fantasy owners playing for titles that week would be grateful), you can’t go wrong with central Florida or southern California.

**But if the NFL covets an unpredictable affair — with potential playoff ramifications for the Lions — potentially buried in the Colorado snow, then Detroit-Denver makes the most sense.

PrevPreviousFANTASY FOOTBALL: 5 Fun Facts to celebrate in advance of NFL Week 9
NextNFL: The ‘You Are Looking Live!’ preview for Week 9Next