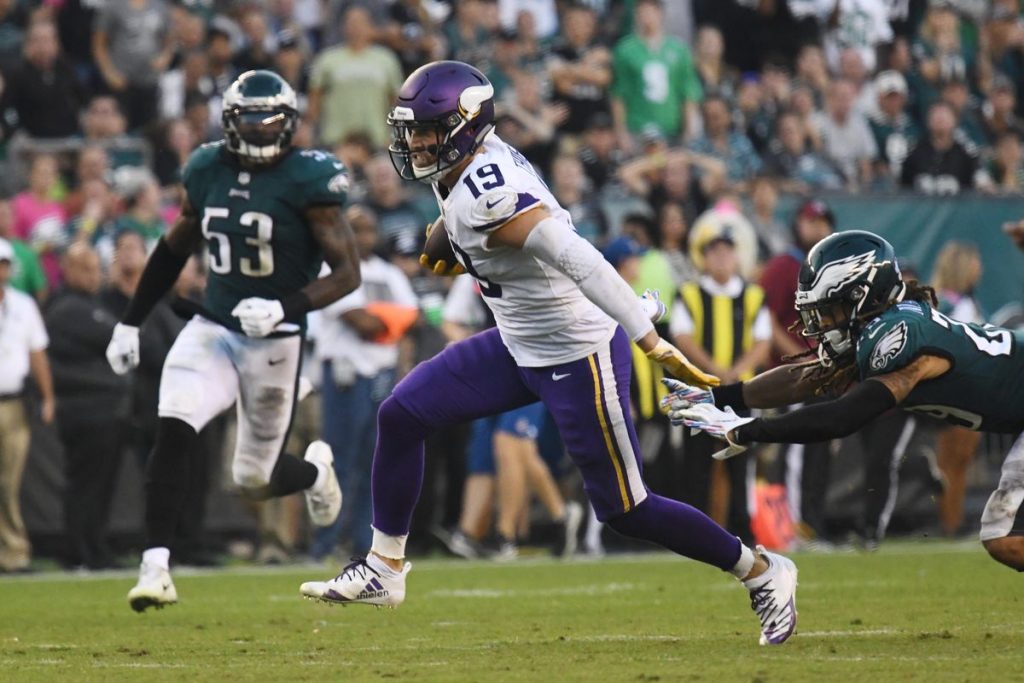 b) The Lions own bottom-10 rankings in passing yards and passing touchdowns surrendered to opposing quarterbacks.

FUN FACT #2
Even counting last week’s clunker against the Browns, Titans tailback Derrick Henry has amassed 100 total yards and/or one touchdown in eight of his last 10 December outings.

And then there’s this: The 1-11 Jaguars currently rank in the bottom 10 for rushing yards, rushing touchdowns and receiving TDs yielded to opposing backs.

FUN FACT #3
The Chargers’ 45-0 home drubbing to the Patriots last week might have been embarrassingly one-sided, but we’re willing to look past that debacle for Week 14.

****Here’s a trend worth noting: Allen hasn’t posted three straight games of less than 100 yards receiving this season. (He’s due for another century game.)

FUN FACT #4
We’re playing a hunch with Evan Engram this week, in terms of being a top-10 tight end, despite much evidence to the contrary:

****The Cardinals have surrendered the fifth-fewest touchdowns to opposing tight ends.

****Engram hasn’t registered a home touchdown since the 2018 campaign.

****Only one tight end has cleared 50 yards receiving against Arizona this year (Detroit’s T.J. Hockenson).

So, why the formidable ranking for Engram?

FUN FACT #5
There’s a good news/bad news proposition with Steelers QB Ben Roethlisberger, in relation to this weekend’s mega-clash with the Bills:

Plus, the Bills are a middling defense, in terms of completions, passing yards and passing TDs allowed to opposing quarterbacks.

On the negative side, Roethlisberger has never recorded a touchdown pass at Buffalo.

FUN FACT #6
Jamison Crowder holds painfully mediocre averages of three catches and 40 yards in his last four games; and yet, fantasy owners would be foolish to bench the Jets receiver in PPR leagues this week.

a) The Seahawks defense ranks dead-last in targets, receptions and receiving yards allowed to opposing wideouts.

b) New York’s typically barren offense has averaged 21.5 points in his last four games; and that includes a three-point clunker against Miami.

c) Crowder notched double-digit targets in his first four games this season; and he collected seven last week with Sam Darnold under center.

d) In his last five road outings, Crowder has respectable averages of six catches, 67 yards and 0.8 touchdowns; and that includes a one-catch, 16-yard debacle from Week 11.

(To be fair, Zeke notched a receiving score versus the Vikings in Week 11.)

Put it all together, and this doesn’t bode well for Sunday’s matchup with the Bengals, who have surrendered the seventh-fewest rushing touchdowns to opposing tailbacks.

FUN FACT #8
Philip Rivers has enjoyed a nice surge with the Colts, tallying averages of 291 yards passing and two touchdowns in his last seven games.

Should fantasy owners expect a similarly stellar output this week against the Raiders? That’s a tough one to answer.

In his last three meetings with the Raiders (then as a Charger), Rivers posted middling averages of 236 yards and 1.3 touchdowns.

However, in the three encounters before that, Rivers rolled for superb averages of 331 yards and two touchdowns against the Raiders.

FUN FACT #9
You know who will be a sneaky-good second-round pick in PPR leagues next year? Bears tailback David Montgomery.

****And regarding this week’s matchup, Montgomery encounters a Texans defense which holds bottom-6 rankings with rushing yards, rushing touchdowns and receiving yards allowed to opposing backs.

FUN FACT #10
Go ahead and pencil in Vikings wideout Adam Thielen for monster numbers this week, perhaps in the blueblood neighborhood of Davante Adams.

Thielen (five TDs since Week 10) has scored at least one touchdown in his last four regular-season outings against NFC South foes; and for last year’s playoff clash with the Saints, Thielen crushed the competition for seven catches and 129 yards.

Here’s something else to celebrate: The Bucs currently own bottom-10 rankings versus opposing wideouts, in the all-encompassing categories of targets, receptions, receiving yards and receiving touchdowns allowed.

I’m not a doctor, nor do I play one on TV … so please take the following fantasy criticism with a grain of salt:

You’re an idiot for benching Christian McCaffrey this weekend — IF, IF, IF he suits up against the Broncos.

Yes, we’re all aware of the Negative Nelly reports alluding to McCaffrey’s quad injury, an ailment that’s separate from his bruised shoulder.

And yes, there’s certainly a chance the Panthers will put a proverbial pitch count on CMC’s touches, limiting his fantasy upside for quarterfinal-playoff weekend.

Still, an active benching makes no sense, given these notables:

a) McCaffrey holds elite-level averages of 124 total yards and two touchdowns in his three games this season. Along those lines, he owns a staggering catch-to-target rate of 89 percent.

b) The Broncos own bottom-12 rankings with opposing tailbacks, citing rushing yards and rushing touchdowns surrendered.

c) Even if McCaffrey collects merely half of his seasonal touches output (25.3 per game) … he’s still a relative lock for four catches, 85 yards and one touchdown.

Which brings us to this: Are you willing to leave McCaffrey’s minimum-bar effort of 18.5 points on the bench, come Sunday?