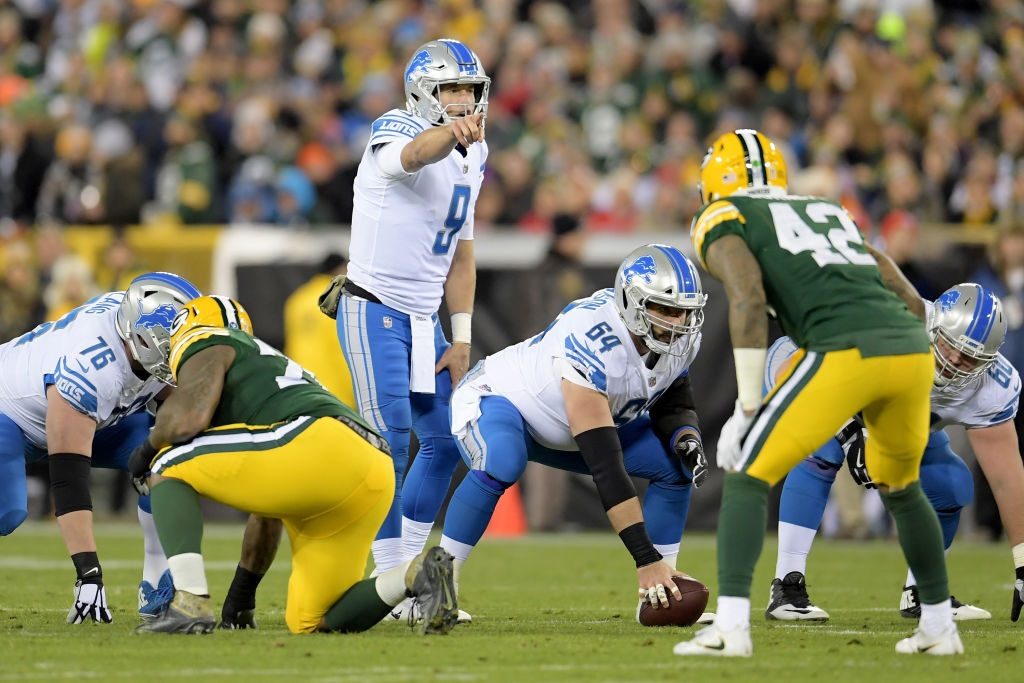 Since the league adopted overtime in the 1970s, no NFL team has subsequently finished a regular season with two or more ties.

That bodes well for this week’s Lambeau Field clash between the Lions and Packers, in terms of determining a victor, since Detroit already incurred a tie back in Week 1 (vs. Arizona).

With that fact-based caveat out of the way, here are four logistical reasons why tonight’s matchup stands as the most important Monday Night Football clash of the young season:

PLAYING FROM BEHIND HAS NEVER BEEN THE LIONS’ STRENGTH, WHEN CHASING A DIVISION TITLE

A Monday loss would drop the Lions to 2-2-1, while simultaneously boosting the Packers to 5-1.

Put another way, Detroit would have two defeats on the season … and yet, be trailing Green Bay by 2 1/2 games in the NFC North.

That’s a quirky hypothetical, for sure, and not necessarily a positive one.

Is 2 1/2 games an insurmountable gap to make up over the final 11 weekends of action?

For a normal NFL stalwart with a lengthy playoff history, perhaps not.

However, in my lifetime, only the 1983 Lions overcame a sluggish start (1-4 after five weeks) to rally for the division crown; and it’s worth noting, the NFC Central was consistently mediocre during the early 80s.

Division champs with 9-7 (or worse) records were painfully plentiful.

For the foreseeable future, just ignore the NFC East, otherwise known as the red-head stepchild of the NFC contenders.

Why is that? Well, the East currently sports a .500 tie for first place (Eagles, Cowboys) and has the wretched Redskins (1-5 overall) sitting only two games shy of the division lead.

By all appearances, the eventual East champion just SCREAMS No. 4 seed in the NFC playoffs.

For the other three divisions (North, West, South), a Green Bay win on Monday would subsequently place three 5-1 or 5-0 teams at the top of their respective races (Packers, 49ers, Saints).

As part of that, the fan bases in Wisconsin, northern California and Louisiana can tentatively harbor dreams of contending for the No. 1 or 2 seeds … both of which earn byes for Wild Card Weekend.

Could Green Bay advance to the Super Bowl without the benefit of a top-two seed? Sure, but there’s also a negative historical trend to consider:

Since the NFL went to playoff seeding for the 1990 season … in that 29-year span, just one Super Bowl champion started the postseason as the No. 3 seed (2006 Colts).

The NFC North clubs really lucked out with this year’s schedule rotation, drawing the NFC East and AFC West.

Even with the high-octane Chiefs (losers of two straight at home) on the docket, all four NFC North squads should realistically shoot for a crossover record of 6-2 or better.

The Lions defeated the Chargers in Week 2, beat the Eagles in Week 3 and suffered a last-second loss to the Chiefs in Week 4; and for Weeks 8-11, it’s four consecutive tilts with the Giants (home), Raiders (road), Cowboys (home) and Redskins (road).

There’s one more crossover gift in Santa’s stocking by the fireplace mantle: The erratic Broncos for Week 16.

Of course, knowing Colorado weather in late December, the Lions and Broncos could easily play that game in blizzard or arctic-cold conditions.

So, let’s not start counting the proverbial chickens before they hatch.

Here’s one plus in the Lions’ favor: Detroit won’t have to worry about any tiebreakers among the other NFC playoff contenders … thanks to the good news/bad news oddity of the Week 1 tie with Arizona.

**For its next six games (Lions, Raiders, Chiefs, Chargers, Panthers, 49ers), Green Bay will likely only be prohibitive favorites for Oakland.

**The Packers are the only NFC North team on the undefeated Niners’ regular-season schedule.

**Green Bay’s the only NFC North club to close the regular season with three intra-division outings … and two are on the road (vs. Chicago, @ Minnesota, @ Detroit).