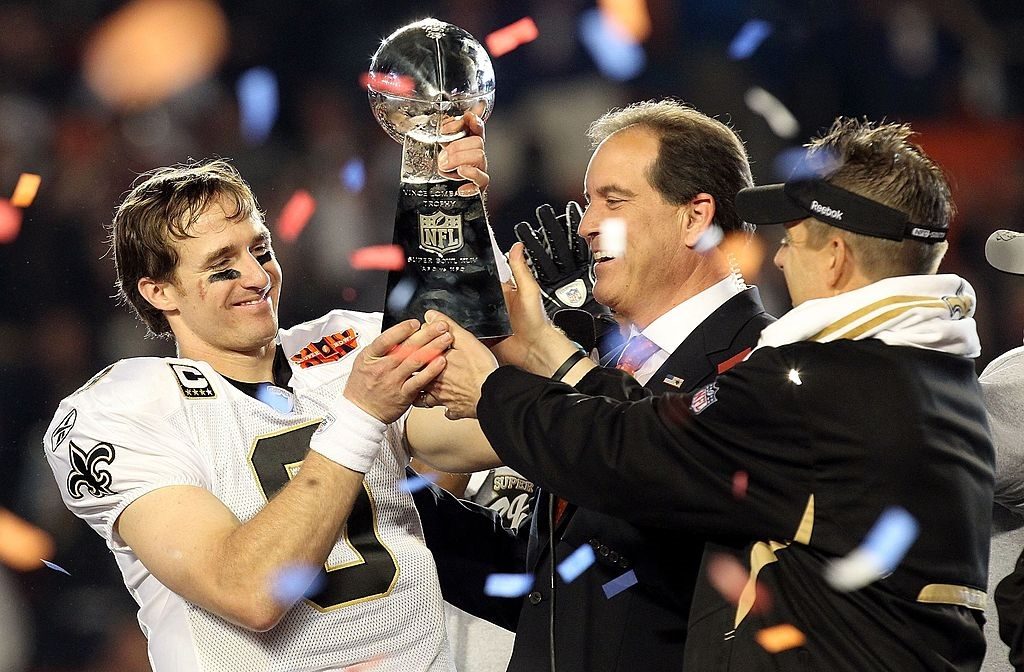 Last Thursday (Halloween Night), the 49ers joined the Patriots as the NFL’s only 8-0 clubs for the 2019 season.

A few nights later, though, New England fell to Baltimore on national TV, guaranteeing future Hall of Famer Tom Brady would have to wait another season to experience the only plausible achievement to escape his grasp from the last 19 years:

A team run of total perfection, from Week 1 to the Super Bowl.

With the 49ers and Patriots in mind (but excluding them from the survey), BATSBY Sports remembers the 14 Super Bowl-bound teams to launch 8-0 starts.

**The ’72 Dolphins are the gold standard of the modern era, serving as the only undefeated champion in Super Bowl history.

**That year, Miami achieved the rare double-double of leading the NFL in scoring offense (27.5 points per game) and scoring defense (12.2 ppg).

**For their 8-0 start, the Dolphins posted double-digit victories six different times. For Week 9, the vaunted No-Name Defense collected the first of three shutouts during the regular season.

**The NFL didn’t graduate to a 16-game regular season until 1978, meaning these Dolphins needed only 17 combined wins (14 regular season, three playoffs) to claim the Lombardi Trophy.

**It’s worth noting: Miami beat just one team with a winning record (New York Giants), prior to the playoffs.

**Dallas wasn’t the most dominant regular-season team of the 1970s, requiring overtime to prevail in Week 1, dropping back-to-back outings in November (Cardinals, Steelers) and notching only six wins of double-digit points.

**However, the Cowboys were near-perfect during the playoffs, cruising to blowout victories over the Bears, Vikings and Broncos (Super Bowl XII).

**The ’77 Cowboys had a Hall of Fame quarterbak in Roger Staubach (2,620 yards passing, 21 total TDs), but the offense’s proverbial bread had been buttered through the running game — with Tony Dorsett (1,280 total yards, 13 TDs), Robert Newhouse and Preston Pearson accounting for 2,380 total yards and 22 touchdowns.

**The 1985 squad could be the greatest one-off champion of the Super Bowl era — factoring in 7-year title windows — which can be construed as both a compliment … and put-down.

**Chicago recorded 12 blowout victories (double-digit points) during the regular season, a run of dominance which included two shutouts and the defense surrendering 10 or fewer points 11 times.

**Here’s something that often flies under the radar: The 1985 Bears had the NFL’s No. 2 scoring offense.

**In fact, when charting the Bears’ final 13 wins that year (including the playoffs), the opposing offenses posted painfully low averages of 6.3 points per game.

**That Bears-Dolphins clash remains the highest-rated game in the history of Monday Night Football.

**The Bears demolished the Patriots by 36 points in Super Bowl XX. The only real bummer of the night: Future Hall of Famer Walter Payton (16,726 career rushing yards) never found the end zone.

**The 1990 Giants might have proffered a 10-0 start, but they were never prohibitive favorites to capture the Lombardi Trophy.

**For the playoffs, the Giants upended the aforementioned 49ers and Bills. For the NFC title game, New York relied on five Matt Bahr field goals to pull off the major upset.

And in the Super Bowl, the Giants nailed the pre-game plan of controlling the clock — and thus keeping the Bills’ K-Gun offense off the field — to perfection, possessing the ball for more than 40 minutes.

**The Bills still had a golden shot at winning the first Lombardi Trophy in club history. However, Scott Norwood’s 47-yard field goal would sail wide right, as time expired.

**At the time, I thought the 1991 Redskins were excellent candidates for matching the 1972 Dolphins’ run at seasonal/playoff perfection.

But alas, an emerging dynasty in the Cowboys (eventual Super Bowl champs for 1992-93, 1995) demonstrated their future firepower by toppling the Redskins at RFK Stadium.

After that, Washington momentarily went on cruise control to close the regular season, before ramping things up for the postseason.

**Three prominent occurrences stand out with the Broncos’ run to championship glory:

a) At the time, Terrell Davis became just the fourth tailback in NFL history to rush for 2,000 yards in a single campaign.

b) Denver joined Dallas as the only franchises to capture back-to-back Lombardi trophies during the 1990s.

**Denver sprinted out to a 13-0 start … before succumbing to the middling Giants (8-8 for the season) in December.

**How cool is this? The 2005-06 Colts are the only ones from this survey to proffer dueling 8-0 starts in back-to-back seasons.

**The Colts slumped to a 3-4 finish and squandered control of a first-round bye during the AFC playoffs. As such, Indy had to beat 13-3 Baltimore on the road, relying on five Adam Vinatieri field goals to grind out the 15-6 victory.

**For the AFC title game (at Indy), QB Peyton Manning (349 yards passing, two total TDs) led the Colts on a furious second-half rally, converting a 21-6 deficit into a 38-34 victory over the Patriots.

**For Super Sunday, the Colts allowed a kick-return touchdown to the Bears on the opening sequence.

But over time, Manning and the rushing combo of Joseph Addai/Dominic Rhodes (264 total yards, 1 TD) carried Indy to a 29-17 victory — the Colts franchise’s first Lombardi Trophy in 36 years.

**The 2009 Saints ran hot and cold from wire to wire, reeling off 13 consecutive victories to open the season, followed by three straight losses in December, and capped with a three-game run to the Lombardi Trophy.

The playoffs were even more hectic: For the divisional round, the Saints rolled to a 45-14 demolition of the Cardinals. They needed a gift interception from Vikings QB Brett Favre to collect an overtime win in the NFC title game; and for the Super Bowl, a successful onside kick to open the second half vaulted New Orleans to the first championship in franchise history.

PAINFULLY CLOSE … BUT NO CIGAR

**Citing years of NFL Films footage, a number of Vikings players claim the 1975 team had the greatest chance at championship glory.

Unfortunately, the ’75 season ended in shocking misery, with the upstart Cowboys connecting on the infamous ‘Hail Mary’ touchdown in the final seconds of the divisional-playoff round.

**The 1973 Vikings enjoyed a less-celebrated strong start, posting blowout victories (double-digit spreads) just three times during the 9-0 start. From there, Minnesota had a decent finishing kick of 3-2 during the regular season … with the second defeat being a 27-0 clunker to the playoff-bound Bengals.

**In hindsight, the Cincinnati shakedown might have portended ominous things to come, once Minnesota graduated from the NFC playoffs (thumping Washington and Dallas) … before being overwhelmed by the Dolphins in the Super Bowl.

**For the Vikings’ Super Sunday loss, the Dolphins (repeat NFL champs) attempted only seven passes (six completions for Hall of Famer Bob Griese) and rolled for 196 yards and three touchdowns on the ground.

**The 1982 Dolphins reached Super Bowl XVII on the strength of a dominating defense (dubbed The Killer B’s).

However, when Miami again reached Super Sunday two years later, it had seamlessly morphed into an offensive machine, coinciding with the emergence of wideouts Mark Duper, Mark Clayton and second-year quarterback Dan Marino, who would break new NFL ground with 48 TD passes (a record that stood for 20 years).

**Miami was virtually unstoppable during the regular season, rolling to an 11-0 start, recording 10 blowout wins (double-digit spread) and enjoying a robust point differential (+13.4).

**Marino’s Dolphins made quick work of the Seahwawks (avenging a playoff upset from the previous season) and Steelers during the AFC playoffs.

However, the fun came to a screeching halt in Super Bowl XVIII, with the 15-1 Niners cruising to a 38-16 victory — otherwise known as the second of three Lombardi trophies with Bill Walsh and Joe Montana working together.

**The Patriots’ run at perfection was an across-the-board reckoning for a club that genuinely wanted to win every game 45-7.

How else should one reconcile otherworldly production with point differential (+19.7 points), turnover margin (+16) and blowout wins (12 double-digit victories) — including three division winners?

**That said, there remains a fine line between being the greatest club in NFL history … and the Best Team Not To Win The Super Bowl.

**During the regular season, New England had a 5-0 mark against playoff teams.

**The ’09 Colts represent a cautionary tale for future teams carrying an undefeated record into the month of December.

Indy cruised to a 14-0 mark and was seemingly positioned for a clean 16-0 run — thanks to a pair of season-ending home games.

However, things took a turn for the worse with Game No. 15, when head coach Jim Caldwell inexplicably pulled QB Peyton Manning in the second half, with the Colts leading the Jets at the time.

With Manning on the sidelines, wearing the public face of abject misery, the Jets rallied from a 15-10 deficit and soon walked away with a 29-15 win, amid a cascade of audible boos for the HOME team.

**A week later, the Manning-less Colts imploded once again, settling for a 14-2 regular-season mark.

**Things improved during the playoffs, though: Convincing victories over the Ravens and Jets boosted Manning and Co. to their second Super Bowl berth in four seasons.

However, that euphoric feeling would have a short shelf life (versus the Saints), with the Colts getting burned on an onside kick AND pick-six during the second half.

**Seven of Carolina’s first 14 wins had a spread of double-digit points; and four of the other seven involved a final tally of four points or less.

**The Panthers’ heralded run at matching the 2007 Patriots ended in Week 15, when the home-standing Falcons rallied from an early deficit and gutted out a 20-13 victory.

**Here’s something weird: In this age of ‘flex’ scheduling, the Panthers still had a 1 p.m. kickoff for Wins 8 through 14 six times.

If this had been any other franchise, especially one playing in a bigger market, Carolina’s bid for an undefeated campaign would have garnered more play during the high-profile windows of 4 and 8 p.m. on NFL Sundays.

**Newton led the Panthers to a berth in Super Bowl 50, highlighted by a 49-15 demolition of the Cardinals in the NFC title game.

The club’s luck, however, would run out on Super Sunday, with Denver outlasting Carolina in Peyton Manning’s career swan song.

For those with short memories, it was also the infamous game when New Orleans wideout Michael Thomas channeled his inner Joe Horn, by randomly pulling out a cell phone after scoring the game-deciding touchdown at the Superdome.

**During the regular season, the Rams posted 30 or more points a staggering 12 times — highlighted by the 54-51 win over the Chiefs, the highest-scoring game in Monday Night Football history.

Of greater importance, tailback Todd Gurley incurred a mysterious knee injury … which didn’t stop him from playing, but largely cut into his weekly touches.

**The Rams exacted some revenge on the Saints in the NFC title game, benefiting from a blown call (missed pass interference) and prevailing in overtime.