MOCK DRAFT MADNESS: Our initial stab at projecting the NFL’s 32 picks of Day 1 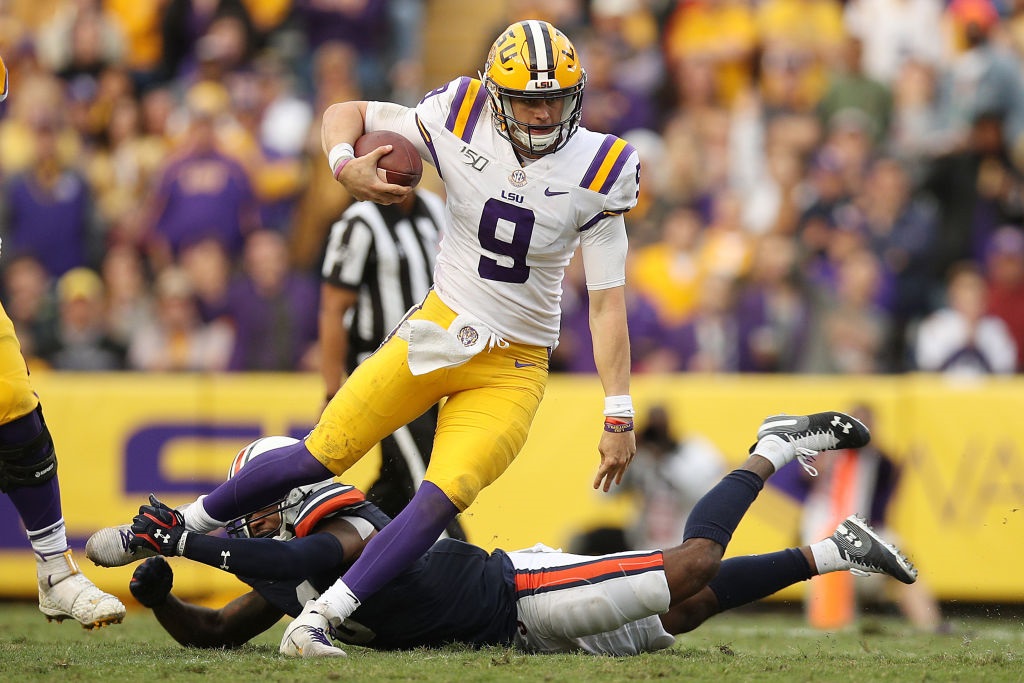 One month ago, BATSBY Sports wasn’t planning to post semi-regular projections for the NFL draft’s opening round, given the editorial attention required for the NCAA tournament, The Masters and the launch of Major League Baseball’s 2020 campaign.

But here we are, operating in a Coronavirus world … with no mainstream sports taking place in America.

(Apologies to the upcoming Wrestlemania.)

As such, we’re suddenly left with plenty of idle time to predict the actions of the 26 NFL teams which currently posses a Round 1 selection.

The ones without a Day 1 selection: Texans, Colts, Bills, Rams, Steelers and Bears.

BATSBY Sports offers a capsule projection of Round 1, which will occur virtually on April 23 (sorry, Las Vegas party planners).

One last note: Right now, we’re only forecasting one definitive trade for Round 1: Miami will move two spots higher to No. 3 … while in return, ceding three top-40 picks to Detroit (5th, 26th, 39th).

BENGALS — QB JOE BURROW, LSU
SKINNY: The penny-wise Bengals traditionally have one of the NFL’s smallest scouting staffs, but this won’t be a problem for the No. 1 slot, since Burrow’s an Athens, Ohio native. At 6-foot-3, 221 pounds, Burrow has the ideal size and athleticism to be a prototypical quarterback at the highest level. He’s also coming off perhaps the greatest offensive season in collegiate history (5,671 yards passing, 65 total TDs, Heisman Trophy winner, national champion).

DOLPHINS — QB TUA TAGOVAILOA, ALABAMA
SKINNY: It makes zero sense to execute a mock draft here, without acknowledging the very-large elephant in the room: With the Dolphins, Chargers, Jaguars and possibly Panthers needing a future franchise-bearer at quarterback, what would be the Lions’ motivation for keeping the No. 3 overall choice? Within that rationale, expect Detroit general manager Bob Quinn to auction this pick to the highest bidder, eventually settling for Miami’s offer of two first-rounders (5th, 26th, but not the 18th selection) and its Round 2 pick at 39.

GIANTS — OT JEDRICK WILLIS JR., ALABAMA
SKINNY: There’s been no clear consensus regarding this year’s best offensive tackle prospect, and that likely won’t change now that everyone’s stuck at home for the next few weeks. So, we’ll make an educated guess in favor of Willis, a pass-blocking marvel who could handle either tackle spot for the Giants on Day 1.

LIONS — CB JEFF OKUDAH, OHIO STATE
SKINNY: The Lions have a glowing need at cornerback, thanks to the club’s aggressive ‘press’ schemes on defense and the recent jettisoning of Pro Bowler Darius Slay (to Philadelphia). Enter Okudah, an athletic force who evokes cover-corner comparisons to Jalen Ramsey.

CHARGERS — QB JUSTIN HERBERT, OREGON
SKINNY: The Chargers are taking a minor gamble here, waiting out Herbert’s availability past the top five; but everything worked out in the end. The mammoth-sized, cannon-armed Herbert represents the classic ‘pocket passer’ prototype, and he has deceptive quickness when evading the pass rush. Look no further than his three rushing touchdowns in Oregon’s Rose Bowl upset of Wisconsin.

PANTHERS — LB ISAIAH SIMMONS, CLEMSON
SKINNY: The Panthers might have grabbed Herbert here, if he were still on the board. Instead, the club follows through on its rock-solid plan of landing the incomparable Simmons, who has the size, speed, grace and intelligence to play just about any position in Carolina’s defensive scheme.

CARDINALS — OT TRISTAN WIRFS, IOWA
SKINNY: My Big Ten bias comes shining through with this selection. Wirfs has elite-level size and athleticism, and his character quotients are seemingly off the charts. And yet, there doesn’t seem to be much momentum for the Iowa standout landing in the top seven. Perhaps some scouts envision Wirfs as a long-term candidate at left guard. Who knows! Thankfully, the dropoff won’t be too severe, with the Cardinals smartly swooping in to grab a cornerstone O-lineman.

JAGUARS — DL DERRICK BROWN, AUBURN
SKINNY: The Jaguars could potentially have three quality chances at securing a quarterback in the first two rounds. Along those lines, it makes initial sense to momentarily look past the offense … and focus on a high-upside prospect in the trenches. Brown might evolve into a perennial star in the pros, similar to Aaron Donald.

BROWNS — OT ANDREW THOMAS, GEORGIA
SKINNY: Stop me if you’ve heard this one before: The Browns are building a championship-level roster, and it’s only a matter of time before the franchise finally capitalizes on this absurd wealth of premium talent. The only noticeable hole with Cleveland’s starting depth chart could be at left tackle. Enter Thomas, the mammoth-sized prospect, supremely athletic Dawg who might be a plug-and-play asset on Day 1, opposite the free-agent acquisition of Jack Conklin. (He had been playing right tackle with the Titans.)

JETS — OT MEKHI BECTON, LOUISVILLE
SKINNY: I originally had the Jets trading down from 11, in hopes of stockpiling more picks in the early-to-mid rounds. What changed our thinking? Given the accessibility to talent-rich receivers in the middle of Round 1, the 49ers likely wouldn’t part with their second first-rounder (31st overall) to corral Jerry Jeudy. As such, New York simply sticks to its board, opting for Becton — who ranks as high as eighth on a few mock drafts.

FALCONS — LB PATRICK QUEEN, LSU
SKINNY: Georgia tailback D’Andre Swift would have been a major consideration here, prior to NFL free agency; but the short-term acquisition of Todd Gurley buys the Falcons time with the running game. Enter the newfound interest in Queen, who launches a run of ball-hawking LSU defenders for Rounds 1 and 2.

COWBOYS — CB KRISTIAN FULTON, LSU
SKINNY: My media colleague Dan Mathews would prefer the Cowboys to take another LSU secondary member — safety Grant Delpit. But for me, cornerback is the more pressing need with Dallas, which lost Byron Jones to free agency and corralled only seven interceptions last season (tied for last in the NFL).

RAIDERS — CB C.J. HENDERSON, FLORIDA
SKINNY: For a brief second, we flirted with the notion of the Raiders drafting both Jerry Jeudy and Ceedee Lamb in the first round — in hopes of thrilling the Las Vegas fan base to unprecedented levels. But common sense eventually prevailed here. Bottom line: You can never have enough blue-chip cornerbacks in a division that includes Patrick Mahomes. This exercise aside, Henderson might possess the talents of a top-12 pick.

JAGUARS — WR CEEDEE LAMB, OKLAHOMA
SKINNY: It’s worth noting: I have Lamb being slotted lower than a number of national draft pundits … which speaks to the great depth of the 2020 wideout class. Regardless of the ultimate landing spot, Lamb (back-to-back campaigns of 60-plus catches, 1,100-plus yards, double-digit TDs at Oklahoma) has the tools and star power to quickly rival DJ Chark in the Jaguars’ passing offense. And frankly, it’s about time Jacksonville (just one top-10 scoring finish since 2009) had an offense which scared the you-know-what out of opposing defenses.

VIKINGS — LB K’LAVON CHAISSON, LSU
SKINNY: I consult 10 mock drafts on a regular basis; and of these documents, Chaisson consistently serves as the highest-ranked asset still on the board. It’s also a good culture fit for the Vikings, who are transitioning to a younger, more athletic cast of defensive playmakers. Rock-solid pick!

SAINTS — S XAVIER MCKINNEY, ALABAMA
SKINNY: Would the Saints really take the Nestea plunge on Jordan Love or Jacob Eason at this slot, knowing Drew Brees might retire after the 2020 season? It certainly makes sense, when factoring in the franchise’s long-term growth. However, the Saints are built to reach the Super Bowl now … and you can never go wrong in fortifying a secondary that will encounter Patrick Mahomes (Chiefs), Tom Brady (Buccaneers) and Matt Ryan (Falcons) five times this season.

VIKINGS — CB JAYLON JOHNSON, UTAH
SKINNY: The Vikings defense has gotten tangibly more athletic in the last five picks — thanks to the arrivals of Chaisson and Johnson. The latter’s high-end coverage ability and physical prowess would have been well-suited for SEC and Big Ten competition.

LIONS — DE A.J. EPENESA, IOWA
SKINNY: The Lions have many holes to fix on the defensive side. So when in doubt, let’s ride the talents of Epenesa, whose track record for rushing the quarterback (21.5 sacks since 2018), protecting the edge and stopping the run (30.5 tackles for loss since 2018) has had few peers in the last two collegiate seasons. A potential All-Pro in the making. Excellent pick.

SEAHAWKS — OL AUSTIN JACKSON, USC
SKINNY: The Seahawks have invested just one Round-3-or-higher pick on an O-lineman since 2015 (guard Germain Ifedi); so maybe we’ll be way off base with this prediction. That said, Jackson would qualify as a necessary risk to a Seattle offense which needs more size and athleticism in the trenches.

RAVENS — DE YETUR GROSS-MATOS, PENN STATE
SKINNY: The Ravens’ front office has a solid track record with defensive line prospects, and Gross-Matos (two-year totals: 17 sacks, 34.5 tackles for loss) would be considered a veritable steal at No. 28.

TITANS — TE COLE KMET, NOTRE DAME
SKINNY: The Titans couldn’t have asked for a better time to own the 29th pick. Kmet might not have the hype of Iowa’s T.J. Hockenson (last year’s No. 8 overall pick — Lions), but he certainly has prodigious size (6-5, 250 pounds), solid pass-catching skills and impressive physical upside. What’s more, Kmet (43 catches/515 yards/6 TDs in 10 games last season) could be a plug-and-play starting asset for the Titans on Day 1.

PACKERS — OT JOSHUA JONES, HOUSTON
SKINNY: A number of Cheesehead-friendly blogs are advocating for the Packers to draft a wide receiver, thus complementing the amazing skill set of Davante Adams (four-year average: 86 catches/1,066 yards/10 TDs). However, given the glut of gifted wideouts for Rounds 2 and 3, we’ll lean heavily on the size, speed, athleticism and pass-blocking prowess of Jones, who could develop into a long-term successor for left tackle David Bakhtiari.

49ERS — DE MARLON DAVIDSON, AUBURN
SKINNY: The Niners are seemingly in a good spot to trade out of Round 1, creating a path for the Jaguars, Panthers or whomever to corral QBs Jordan Love or Jacob Eason. Why is this relevant? Under the recently extended Collective Bargaining Agreement, teams can theoretically keep a first-round quarterback at a manageable salary for five years … and then slap the same passer with the franchise tag in Year 6, if necessary. But for now, we’ll hold tight on any trades at 31, since Love and/or Eason could possibly slip another 7-10 slots.

CHIEFS — RB D’ANDRE SWIFT, GEORGIA
SKINNY: It helps that both players were standouts at the University of Georgia, but I’ve always viewed Swift (two-year averages: 1,390 total yards, 10.5 TDs) as a doppelganger to Nick Chubb, a real-world and fantasy dynamo for the Browns. Swift has good size, great field vision and an explosive kick at the second level. In other words, he’s a perfect backfield asset for the high-octane Chiefs.

PrevPreviousNFL DRAFT: It’s a no-lose proposition for the Lions, in terms of auctioning the No. 3 pick to the highest bidder
NextCOLLEGE HOOPS: NCAA Tournament’s 15 most memorable games from Final Four SaturdayNext