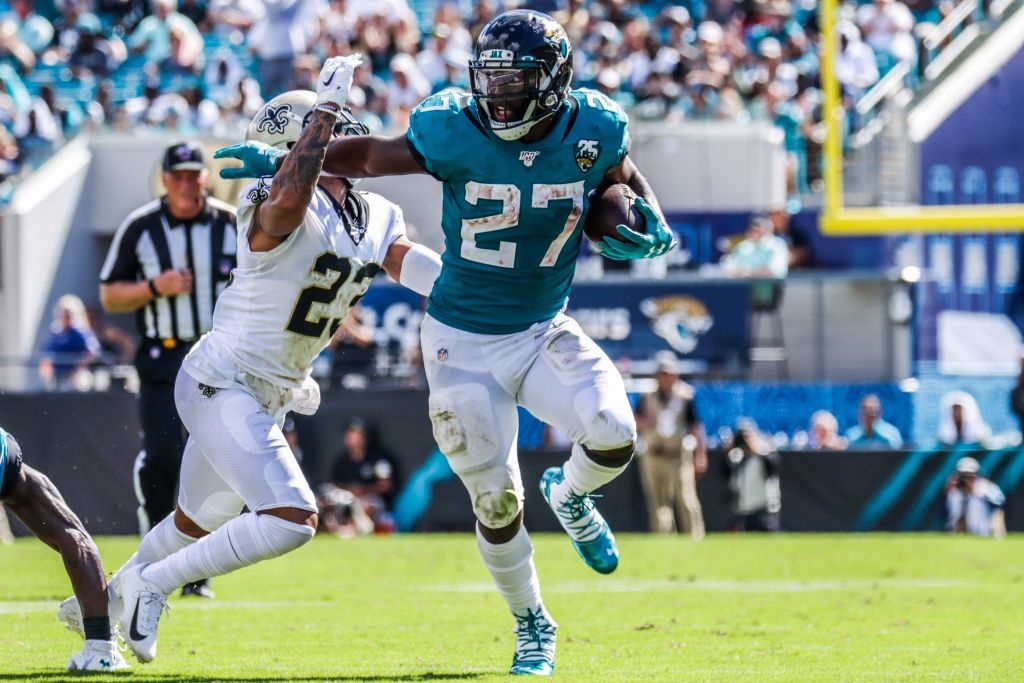 Adding to Cincy’s misery, the same opposing runners are averaging 5.06 yards per carry.

All this bodes well for Jaguars running back Leonard Fournette this week.

For starters, citing his last seven games, Fournette has eclipsed the elite-level threshold of 90 total yards and/or one touchdown six times; and of his five career outings against the AFC North, the bruising back boasts stellar averages of 128 total yards and 1.2 TDs.

Just 10 months removed from Quinn firing three coordinators (offense, defense, special teams) and installing himself as D-coordinator, the Atlanta defense currently ranks 26th in total yards given up and 31st in points allowed per game.

Here’s another thing to lament: Against opposing wideouts, the Falcons rank 27th in receptions allowed, 29th in receiving yards allowed and 31st in touchdowns yielded; and no team from those first six games can match the receiving firepower of the Rams.

The same goes for wideout Cooper Kupp … who has absurdly amassed 100 yards receiving and/or one touchdown in his last 11 non-divisional games (including the playoffs) — with robust averages of 6.5 catches, 91.3 yards and 0.9 scores.

FUN FACT #3
Without a doubt, anxious fantasy owners are feeling the pinch about DeAndre Hopkins’ five-game streak without a touchdown — his longest scoring drought in three years.

But help’s on the way, at least with this historical precedent:

But one could also lead a productive existence merely streaming tight ends — regardless of pedigree — against the floundering Arizona defense.

For example, when encountering tight ends, the Cardinals possess bottom-5 tallies in the crucial categories of targets, catches, receiving yards and receiving touchdowns allowed — with dead-last rankings with yards and TDs surrendered.

Which brings us to this week’s hero: Giants tight end Evan Engram has been a bankable performer in his last five meetings with non-divisional foes, averaging 6.4 catches, nine targets, 73 yards and 0.2 touchdowns during this stretch.

FUN FACT #5
Yes, Cardinals tailback David Johnson has reportedly been dealing with back, elbow and ankle injuries; but since I’m not a doctor (nor do I play one on TV), one must assume he’ll be good to go Sunday in New Jersey.

Why is that? Well, even a nicked-up Johnson still belongs in the upper tier of fantasy backs:

**Johnson has yet to collect 20 or more rushes in any of his last 10 games; and yet, during this stretch, he’s still averaging 91 total yards and 0.7 touchdowns.

**Opposing tailbacks possess a staggering catch-to-target rate of 90 percent against the Giants.

**New York has allowed healthy averages of 4.5 yards per carry to opposing backs.

So, what’s your beef?