NFL: 5 reasons why the Steelers lucked out with Ben Roethlisberger’s season-ending injury 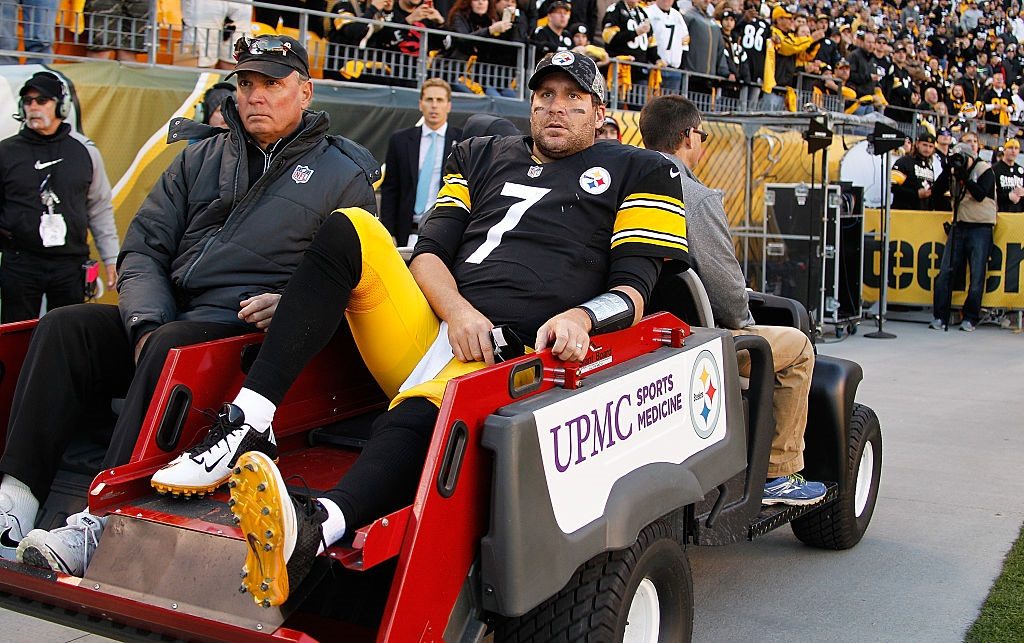 So, of course, the 0-2 Steelers would be better off today with Big Ben in the lineup, instead of him requiring season-ending surgery on the injured right elbow.

Consequently, any dissenting opinions would be ridiculous, when comparing Roethlisberger to second-year Mason Rudolph.

With that qualifier out of the way, let’s get to the fun part:

The glorious Steelers franchise (NFL-best six Super Bowl victories, tied with the Patriots) couldn’t have asked for a more fortuitous bounce with Monday’s shocking news of year-ending surgery for their star quarterback.

Why is that? Let us count the ways:

1) Rudolph gets a full 14-game to prove himself as the Steelers’ long-term answer, whenever Roethlisberger retires

Instead of merely logging half-speed snaps during the preseason, or during mop-up time from September to December, the 24-year-old Rudolph (third-round pick in 2018) will garner a dream chance at becoming an established NFL quarterback — either for the Steelers or another team down the road.

And if you don’t think one transition year with a blue-chip franchise has great meaning, Matt Cassel parlayed a strong season for the Patriots in 2008 (Tom Brady’s torn ACL year) into a $63 million contract with the Chiefs.

Back to Rudolph at the helm. It’s quite possibly the most convenient no-lose situation for the Steelers … since Big Ben’s rookie campaign of 2004, when he subbed in for the injured Tommy Maddox and unwittingly carried Pittsburgh to a 15-1 regular-season record (losing to the Patriots in the AFC title game).

If Rudolph underwhelms as the starter, he’ll likely be supplanted in a year’s time; and if he’s the real deal, then the handoff could become a poor-man’s version of Brett Favre —> Aaron Rodgers.

How deep is the expected class for next April? The Steelers don’t even need a top-10 pick to claim a franchise-changing passer.

Sure, guys like Tua Tagovailoa (Alabama), Justin Herbert (Oregon), Jake Fromm (Georgia) and K.J. Costello (Stanford) might be off the board after the first 10 selections.

But personally, I’d rather long-term resources into Washington junior Jacob Eason, who comes out straight out of Central Casting … when seeking a big-bodied, strong-armed quarterback who could potentially dominate the NFL for the next 10-15 years.

Eason just needs to have a ton of quality reps as the Huskies’ starter in 2019.

And later in Round 1, Iowa’s Nate Stanley and Colorado’s Steven Montez could become stars for teams with winning traditions.

Contrast the above nuggets to the 2015 and 2016 drafts. The Buccaneers (Jamies Winston), Titans (Marcus Mariota), Jaguars (Blake Bortles) and Browns (Johnny Manziel) didn’t exactly clean up at the quarterback spot, opting for highly regarded, but eminently flawed prospects who were the best of a middling lot, in hindsight.

But the Steelers likely won’t incur that pedestrian fate for next year, should they target a quarterback high in the draft.

In this business … timing is everything.

The Steelers’ trio of dynamic playmakers should all be wearing black and gold for the next five years, barring catastrophic injury or unforeseen acrimony with the team.

As such, it really doesn’t matter that Roethlisberger sustained a major injury this year.

The Pittsburgh coaches will still prioritize getting the ball to Smith-Schuster (111 catches, 1,426 yards, 7 TDs last year), Conner (1,470 total yards, 13 TDs) and Washington, who was Rudolph’s teammate at Oklahoma State; and they’ll likely perform at a reasonably high level, given the upside-talent quotient of the Steelers’ new quarterback.

Translation: There’s no need to hit the panic button. This battlefield promotion’s a good thing.

Of course, all bets are off for this season, if Rudolph goes down to injury.

4) The Steelers have apparently been blessed by the football gods, very similar to the Colts

The stars were aligned for the Baltimore/Indianapolis Colts in 1983, 1998 and 2012, the years when John Elway, Peyton Manning and Andrew Luck were magically available at the top of each draft.

Of course, history tells us the Colts squandered the Elway selection in the worst possible way, missing out on Hall of Famers Dan Marino and Jim Kelly, while simultaneously trying to leverage an adequate trade partner for the rights to Elway.

(The owners for Baltimore and Denver got together and hatched out a late-night trade — five days after the draft and with no general managers present — which proved to be absolute garbage for the beleaguered Colts.)

However, there’s no denying the Colts’ good fortune in landing Manning (the second-greatest QB of the modern era, after Tom Brady) and Luck, who churned out 4,000-yard passing/30 TD seasons like a Pez dispenser, before retiring early due to injuries.

Which brings us back to the Steelers:

**In 1970, Pittsburgh won a coin flip for the No. 1 overall pick (over the Chicago Bears) and tapped the aforementioned Bradshaw as the franchise cornerstone on offense (Mean Joe Greene starred for the defense).

**The Steelers had a tailor-made shot at snagging Pittsburgh-area native Dan Marino in 1983, but inexplicably passed on the golden-armed quarterback (for defensive tackle Gabe Rivera).

**In 2004, the Browns absurdly passed on the Ohio native Roethlisberger, despite posting five wins the previous season with the quarterbacking duo of Kelly Holcomb and Tim Couch. A few selections later, the Steelers happily swooped up Big Ben with the 12th overall pick.

**Fast forward to 2020. Even if Roethlisberger doesn’t injure his elbow, the Steelers would still need a quarterback prospect for the long haul; and heaven knows there will be plenty of attractive options coming down the pipeline.

5) Pittsburgh fans could easily absorb one rebuilding year, in lieu of landing a high draft pick next year or finding long-term stability at quarterback

The Steelers have had three head coaches since 1969 (Chuck Noll, Bill Cowher, Mike Tomlin) — a staggering half-century of stability that can only be matched by Tom Landry (Cowboys, 1960-88) and Bill Belichick (Patriots, 2000-present) in the modern day.

Does this mean Pittsburgh has consistently been among the NFL’s best teams for long stretches over the last 50 years?

And yet, the Rooney family has been able to work through the isolated periods of mediocrity, favoring the smart, sensible approach to franchise-building … over hiring Flavor of the Month coaches who tend to burn out in a few years.

So, why would anything be any different, in light of Monday’s events?

Even if the Steelers finish a disappointing third (or worse) in the AFC North, they’re still positioned for tangible bounce-back in 2020, regardless of who’s handling the full-time quarterback duties.

If anything, a Big Ben-free existence could be a major turning point for the Steelers defense, which might have to carry the offense six, seven or eight times this season.