NFL: Atlanta Falcons might have struck short-term gold with the addition of Todd Gurley 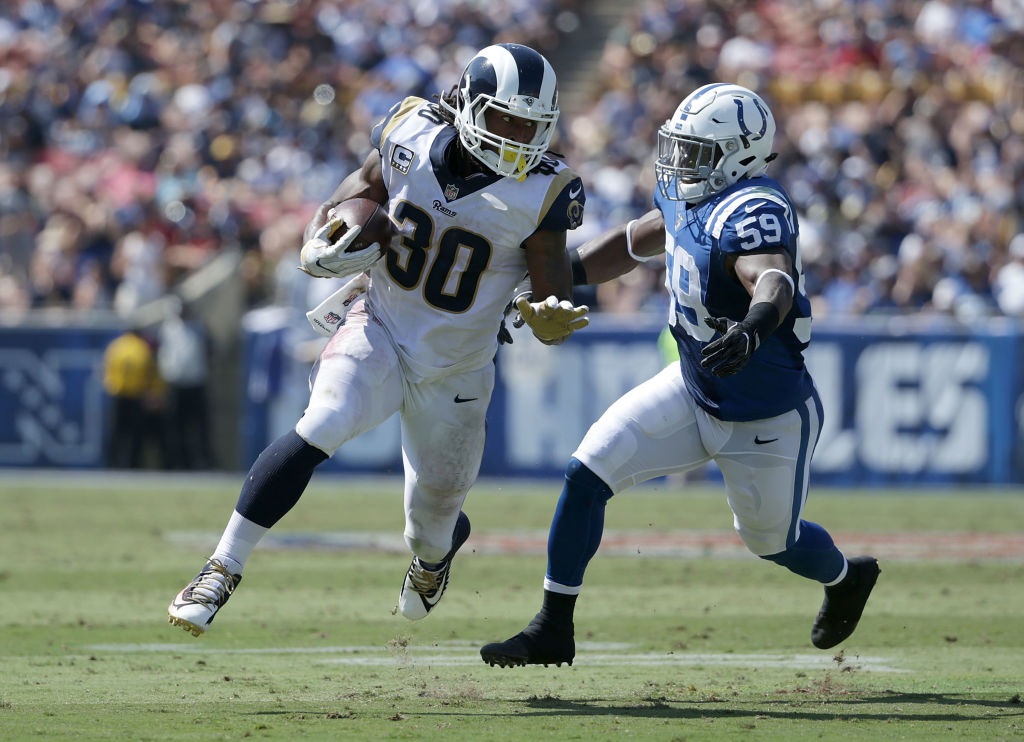 In the cramped quarters of the Falcons’ media room on April 30, 2015, otherwise known as Day 1 of that year’s NFL draft, a FOX Sports colleague of mine was openly chagrined by Atlanta’s choice with the No. 8 overall pick: Clemson linebacker/rush end Vic Beasley.

“Oh, I wonder if the Falcons will regret not taking (Todd) Gurley,” whispered Knox Bardeen to yours truly, while setting up the video equipment for Atlanta’s post-pick press conference (led by general manager Thomas Dimitroff).

It was a great question at the time from Bardeen, given Gurley’s close ties to the South (North Carolina native) and University of Georgia (3,900 total yards, 42 TDs in only 30 collegiate outings).

It was also an awkward question to pose, since the Falcons were apparently willing to hitch their rushing-game wagon to Devonta Freeman, a second-year tailback from Florida State who tallied only 473 total yards and two touchdowns in his rookie campaign (2014).

In hindsight, let’s give the Falcons full credit on the three-way gamble of bypassing Gurley on draft night, purging aging tailback Steven Jackson from the roster (more on him later) and committing to Freeman as the full-time back.

For the 2015-17 seasons, Freeman performed at an elite-level threshold, posting annual averages of 1,452 total yards and 12 touchdowns, while missing only four games during this stretch and playing on an eminently affordable, entry-level contract.

Fast forward to the present: The Falcons might have benefited from another gamble involving Freeman and Gurley.

Roughly 36 hours after the Atlanta brass released Freeman after two injury-plagued seasons, the franchise lucked out by executing a one-year, $5 million contract with Gurley, who had been unceremoniously dropped from the Rams roster on Thursday — just minutes before the tailback was poised to collect a roster bonus of approximately $10.5 million.

In the aftermath, it’s fair to wonder here:

**Did the Falcons know about Gurley’s impending release, prior to Thursday afternoon?

**Was Freeman dropped from the Atlanta roster, based on the educated hunch involving Gurley as a free agent?

**Were the Rams actively shopping Gurley in trade talks this week, perhaps even lobbing a phone call to the Falcons?

Regardless of the above answers, the Falcons might have struck gold with Gurley — assuming the club has a plan for limiting the back’s annual workload to less than 250 total touches.

(Gurley was diagnosed with a degenerative knee condition sometime during the 2018 season; but that’s a vague determination to make, since it might only be related to the former UGA star’s mobility, long after his playing days have concluded.)

a) Gurley owns supreme averages of 1,663 total yards and 18 touchdowns from the previous three seasons with the Rams.

c) The Falcons tied for 24th in offensive rushing touchdowns last season, and desperately need someone of Gurley’s finishing skills around the goal line.

(All 12 of Gurley’s rushing TDs occurred from inside the opponents’ 20-yard line.)

On the down side …

Last year, Gurley incurred a precipitous drop in yards per carry, averaging just 3.9 yards per rush, compared to the 4.9 YPC average in 2018.

However, even this Debby Downer stat comes with a silver lining:

Within minutes of the Gurley signing hitting Twitter on Friday morning, Steven Jackson’s name started trending nationally, even though the 2004 first-round pick (career numbers: 15,121 total yards, 78 TDs) has been retired from the NFL for five years.

Why the sudden attention on social media?

A number of football pundits and Twitter smart-alecks likened Gurley’s Georgia homecoming to a publicity stunt, claiming the back would have nothing left for his stint with the Falcons.

It’s a clever comparison … but not necessarily rooted in factual information. Crucial details such as:

**Jackson signed with the Falcons for his age-30 season; and prior to that, the Oregon State product had logged 2,396 NFL carries with the Rams.

By contrast, Gurley won’t turn 26 until early August; and he has logged only 1,265 carries at the pro level.

**From 2007-12, the six seasons before joining the Falcons, Jackson averaged only 5.7 touchdowns per year, while never exceeding eight scores during this stretch.

Even with his knee issue, Gurley has averaged 18 touchdowns over the previous three years.

But hey, why let facts get in the way of a good narrative?

Bottom line: The Falcons need someone who can find the end zone with regularity. They’re not necessarily looking for the old Gurley, in terms of being a shoo-in for 1,800 total yards.

And if the club should require extra running-back help from this year’s draft, the Falcons can always tap into the UGA pipeline of pro-ready tailbacks … namely D’Andre Swift.

After all, Swift already possesses a number of Gurley-like tendencies.

PrevPreviousMLB: Two plausible proposals for remaking baseball’s master schedule in May or June
NextTOKYO PAUSE: There are no pressing reasons to shoehorn the Summer Olympics into the 2020 calendarNext