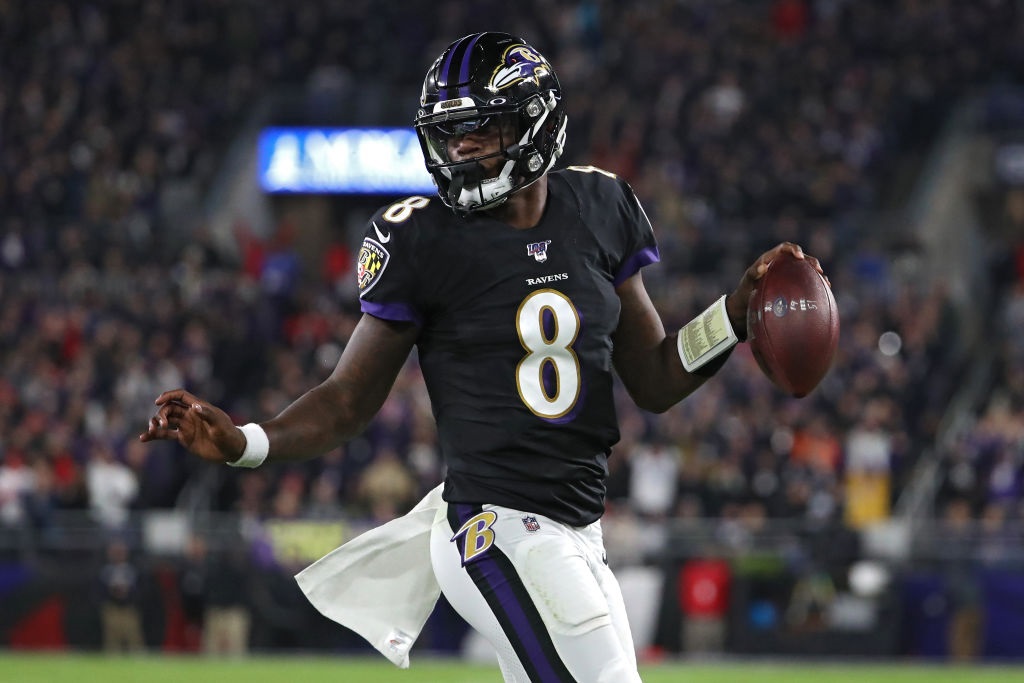 Sunday was a red-letter day for the Ravens franchise, beating the 49ers in a classic battle and then momentarily seizing control of the AFC’s best record — thanks to the Patriots’ loss in Houston.

The powerhouses are now tied at 10-2, but Baltimore owns the tiebreaker, citing the head-to-head victory over New England (Week 9).

Moving forward, we’re forecasting the Ravens to fall Sunday in Buffalo … but then rebounding for three straight wins to close the regular season (vs. Jets, @ Browns, vs. Steelers).

Here’s another thing to celebrate: If Baltimore should prevail this weekend, and then get some temporary help from New England (beating Kansas City), the Ravens could have the AFC North title and a first-round bye in hand.

Let’s not start panicking about about the Patriots’ situation.

Yes, a victory on Sunday night would have been a major coup in the franchise’s quest for home-field advantage throughout the AFC playoffs; but in reality, it wasn’t a death knell to their chances of winning a conference title.

a) As long as New England takes the AFC East crown and earns a first-round playoff bye — either as a No. 1 or No. 2 seed — the club remains in good shape.

Just avoid the wild-card round and multiple road games during the postseason.

b) The red-hot Ravens are certainly playing well, but no AFC contender from 2019 can match the aura of the 2018 Chiefs … and the Patriots walked out of Kansas City with the Lamar Hunt Trophy back in January.

Speaking of which, the Chiefs wouldn’t mind a little revenge this weekend; and we’re happy to oblige by picking a Kansas City triumph over New England.

After that, we like the Patriots finishing strong with wins over the Bengals (road), Bills (home) and Dolphins (home).

The Texans might be the AFC version of Schrodinger’s Cat, in terms of the club’s chances of winning the AFC South being alive … and dead at the same time.

Houston has a potentially treacherous slate to close the regular season, encountering one elite defense (Denver), one elite offense (Tampa Bay) and two titanic matchups with Tennessee, which has gone on a 5-1 tear since Ryan Tannehill supplanted Marcus Mariota at quarterback.

a) Presuming a series split with the Titans (2-2 in the South), the Texans (3-1 in South) would carry the tiebreaker advantage, based on a stronger divisional record.

Within that success, Houston became the first opponent all season to register multiple passing scores versus New England.

Regarding the No. 3 seed … the Texans’ Week 6 road upset of the Chiefs looms incredibly large now.

There’s plenty to love about the Chiefs, especially when the defense surrenders merely nine points to the Raiders … and commits zero penalties in the process.

And that’s why we’re bullish about Kansas City exacting some revenge over New England this weekend, regardless of the blustery winter weather along the East Coast.

The same holds true for the Chiefs’ remaining home outings with the Broncos (Week 15) and Chargers (Week 17).

After that, though, we’re a little uneasy about the Week 16 matchup with the Bears — with one caveat:

**If the Bears (6-6) are officially out of playoff contention before their Sunday Night Football meeting with the Chiefs, then the ‘intangibles’ advantage would dramatically shift in Kansas City’s favor.

Why should this matter, moving forward?

Considering the Chiefs’ October loss to the Texans … the Week 16 clash with the Bears could mean everything when determining the AFC’s third and fourth seeds.

The AFC playoff picture would be thrown a major curveball on Sunday, if the Bills knock off the Ravens.

a) At a hypothetical 10-3, Buffalo would essentially secure the No. 1 wild-card slot (bare minimum).

b) A Bills victory would bring us closer to a winner-take-all scenario with the Patriots in Week 16, regarding the AFC East title and a first-round postseason bye.

c) In the race for home-field advantage (AFC playoffs), the Ravens would then have to worry about the Bills — in the event of a two-way tie for the conference’s best record.

Things are not as rosy for Weeks 15-17: Buffalo’s road trip to Pittsburgh — conveniently sandwiched between the Baltimore and New England encounters — has letdown written all over it.

Add in a Week 16 road defeat (Patriots) and the season-ending victory over the Dolphins, and the Bills post an 11-5 overall record — the franchise’s best mark since 1999.

The Titans might resemble a dark-horse contender for the Super Bowl with Ryan Tannehill at quarterback (5-1 as the starter).

However, that doesn’t absolve the club from its previous sins of September and October.

For example, if the playoffs began today … the Steelers (7-5 overall) would possess the final wild-card slot, due to a stronger intra-conference record (6-3).

But alas, we still like the Titans down the stretch, citing these factors:

a) The Steelers could be prohibitive underdogs for Week 15 (vs. Buffalo) and Week 17 (@ Ravens); and don’t forget about the emotional matchup with Le’Veon Bell and the Jets for Week 16.

As such, the only gimme game might be this Sunday versus Arizona.

b) The Devlin Hodges story might be warm and fuzzy right now — especially after the revenge victory over the Browns. But he’s still a bottom-third quarterback, and the Steelers desperately need the running game to carry the load in the final month.

In other words, the Texans or Chiefs might live to regret drawing the Titans on Wild Card Weekend.