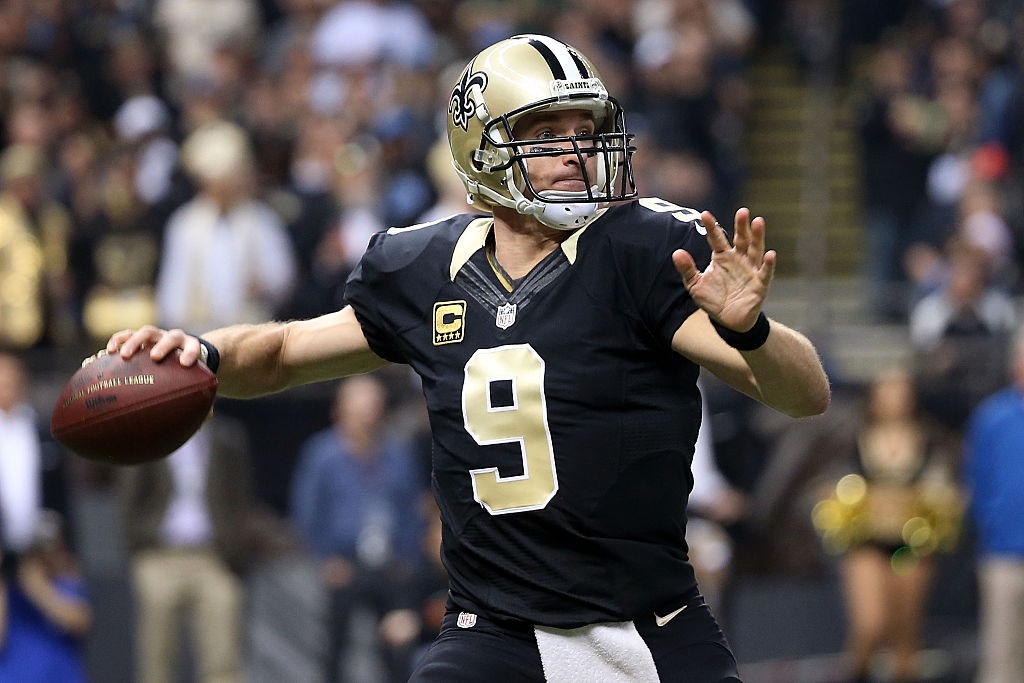 The Saints haven’t registered many optics points in recent weeks, on the heels of a blowout home loss to the Falcons and sluggish victories over the Buccaneers and Panthers.

But alas, New Orleans doesn’t control its eminently doable schedule, or the galling weaknesses of the other NFC South clubs (Falcons, Bucs, Panthers are 12-22 overall).

As such, we’re now attaching a slight edge to the Saints, in terms of finishing with a 13-3 mark and claiming the top seed for the NFC playoffs.

The big move here: New Orleans takes down San Francisco at home for Week 14, ostensibly locking up home-field advantage for the postseason, thanks to the head-to-head tiebreaker over the Niners.

The lone defeat: We’ll side with the tough-as-nails Titans in Week 16, which could lead to a winner-take-all showdown the following Sunday, with Tennessee and Houston battling for the AFC South crown.

The rough-and-tumble 49ers certainly bore the look of a prime championship contender on Sunday night, pounding the Packers at home, 37-8.

That’s all fine and good, but we won’t have a tangible understanding of San Francisco’s realistic Super Bowl hopes, until this upcoming slate of back-to-back roadies with 9-2 Baltimore and 9-2 New Orleans.

Which brings us to this: You’ll hear a flood of ‘Super Bowl Preview’ talk this week, given how the Niners and Ravens are coming off blowout victories on national TV.

However, the 49ers-Saints clash holds more importance at this stage of the season, considering how the Dec. 8 clash could decide home-field advantage throughout the NFC playoffs.

Here’s our math: BATSBY Sports envisions the 49ers collecting wins over the Falcons (home), Rams (home) and Seahawks in Week 17, which might determine the NFC West champion … along with the No. 1 or 2 playoff seed.

The Packers’ blowout loss from Sunday might have been ugly to watch, but it didn’t really alter the landscape of the NFC North race.

How is this the case?

Green Bay still controls its destiny for the No. 3 playoff seed, citing one major factoid:

The Packers have yet to drop a divisional game this season, whereas the Vikings already have two defeats among NFC North foes.

In other words, if BATSBY Sports’ victory projections with the Giants (road), Bears (home), Redskins (home) and Lions (road) hold up, the Green Bay-Minnesota clash for Week 16 might not be an end-all/be-all showdown.

What’s more, if Green Bay can actually run the table from here … it could set up an interesting three-way tie for the best record in the NFC.

In that quirky, but plausible hypothetical, we’d have to go deep into the tiebreaker rules, since the Saints, Niners and Packers would each boast 10-2 conference marks.

Two weeks ago, we had the Eagles slipping past the Cowboys for the NFC East title, by virtue of Dallas dropping three consecutive games for Weeks 14-16 (@ Bears, vs. Rams, @ Eagles).

However, in that short range of time, the Rams have seemingly lost their mojo on offense, and the defense got shredded for 45 points against the Ravens on Sunday.

As such, we’re changing the Rams-Cowboys clash … to a Dallas victory.

If that holds true, the Cowboys would overcome the Eagles for the NFC East crown, thanks to a stronger intra-conference record.

The Vikings-Seahawks clash for Monday night has major ramifications, even though the loser would remain a prohibitive favorite for reaching the postseason:

a) The winner stays in the hunt for their respective division title, along with a potential first-round bye on Wild Card Weekend.

b) At bare minimum, the victor would own a significant edge for the first wild card spot; and if that seems like a needlessly hyperbolic statement, ask yourself the following question:

Would you rather spend Wild Card Weekend at Dallas or Philadelphia … or the first Sunday of January in Green Bay?

With the Vikings, BATSBY Sports projects victories over the Seahawks, Lions (home), Packers (home) and Bears (home) … and a single road defeat to the Chargers (Week 16).

For just about any other season, a Seahawks team with a 9-2 overall mark and spotless road record (6-0) would garner heavy consideration for the Lombardi Trophy.

However, we remain skeptical of Seattle’s chances for claiming the NFC West title, even though the Seahawks own the head-to-head tiebreaker over the Niners … and will host the all-important rematch in Week 17.

The reason for such weariness:

a) Eight of Seattle’s nine victories entailed a final spread of eight points or less.

b) The Seahawks rank 21st in scoring defense, yielding an average of 23.9 points per outing.

d) Russell Wilson might be a first-wave MVP candidate (2,937 yards passing, 27 total TDs, 3 INTs), but he likely can’t do it alone in December. Through 11 games, the Seattle defense has the sixth-lowest number of sacks (23).

Projections-wise, BATSBY Sports has the Seahawks beating the Rams (road), Panthers (road) and Cardinals (home) … but dropping crucial home games with the Vikings and Niners.

Heading into Week 11, BATSBY Sports correctly tabbed the Eagles for back-to-back home losses (Patriots, Seahawks) … but with the lingering potential to capture the NFC East crown.

The rationale back then: Philly capitalizes on one of the NFL’s easiest schedules for Weeks 13-17 (Dolphins, Redskins, Cowboys, Giants twice) and rallies for a 4-1 finish — including a season-defining revenge win over Dallas (Week 16).

For our updated projections, a 4-1 finishing kick remains viable; but we’re also making a small, but meaningful tweak here:

Instead of falling to the Giants in Week 17 … we have the injury-wrecked Eagles losing to the vastly improved Dolphins this weekend.

As mentioned in the Cowboys mini-section, we’ve suddenly lost confidence in the Rams offense … and the defense could be on the brink of implosion, as well.

Consequently, our projections have been massively revised, covering the next five weeks:

The Bears might knock off the Matthew Stafford-less Lions on Thanksgiving, momentarily bringing the club’s record back to .500; but it’ll likely be a short-term reprieve, at best.

Good luck finding a tougher finishing kick for any NFL team, with Chicago encountering Dallas and Kansas City at home (Weeks 14 and 16) and Green Bay and Minnesota on the road (Weeks 15 and 17).

From our perspective, the Bears have a max-out number of eight wins; and this includes a generous projection of beating the Cowboys on Dec. 5.

PrevPreviousNFL: America missed its chance at ending pass-interference calls with Instant Replay … forever
NextCFB PLAYOFF REACTION: There’s a clear, but still-hidden reason to explain Ohio State’s rise to No. 1Next