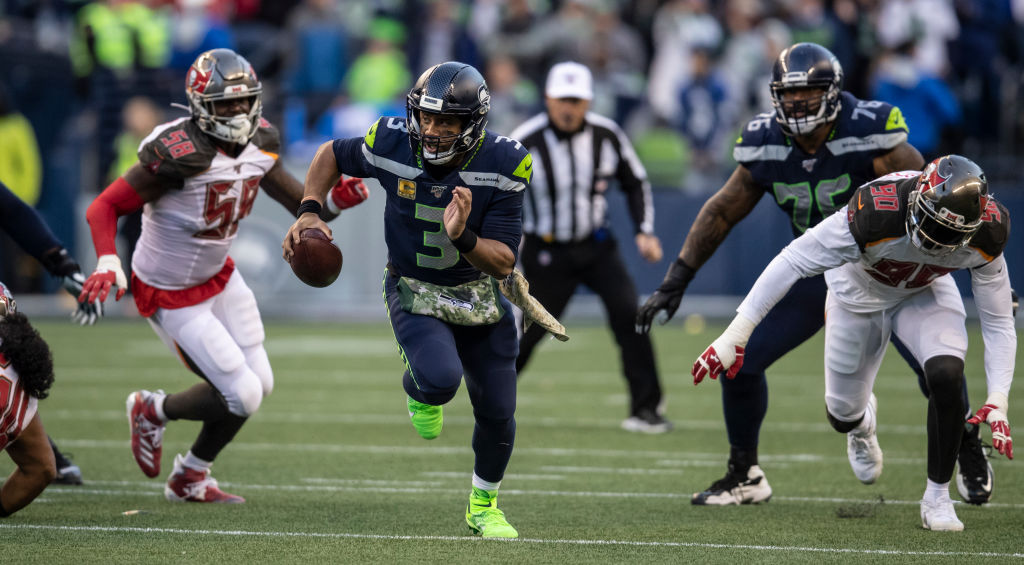 The Niners have been limping to the finish line, posting a middling 3-3 mark over the last six weeks.

And yet, they remain in decent shape for winning the NFC West and earning the No. 1 seed in the NFC playoffs.

Just sweep the remaining outings (vs. Rams, @ Seahawks) and the 49ers would be a strong bet for home-field advantage — and perhaps being the only NFC squad with 13 victories.

But ay the rub: San Francisco doesn’t have much wiggle room here. Given how Seattle, Green Bay, New Orleans and Minnesota are also candidates for 12 or more wins, the Niners are likely boom-or-bust candidates for enjoying a first-round bye.

It’s either the No. 1 seed … or opening the postseason on the road (at Dallas/Philadelphia).

PREDICTION: We like the 49ers going 2-0 down the stretch, highlighted by the revenge date with the Seahawks in Week 17 (presumably on NBC’s Sunday Night Football). And as the only NFC team with three or fewer defeats, the road to the Super Bowl shall go through Santa Clara.

It’s a simple proposition for the Packers (7-1 at home this year), heading into the final stretch:

**Post road victories over Minnesota and Detroit, and Green Bay will own a first-round bye for the NFC playoffs.

**Win either matchup … and the Packers will become NFC North champions — based on a superior intra-division record, compared to the Vikings.

The biggest drama moving forward? It could easily involve the Packers and Saints going through many tiebreakers to determine the No. 2 and 3 seeds (presuming division titles for both). Something like this:

OVERALL RECORD: 12-4 for both
HEAD-TO-HEAD TIEBREAKER: Not applicable
CONFERENCE MARK: 9-3 for both
RECORD vs. COMMON OPPONENTS: Saints 3-1 (vs. Bears, Cowboys, Panthers Vikings) … and Packers 4-1

PREDICTION: Green Bay falls to Minnesota in a thriller this Sunday, but maintains control of a postseason bye with its season-ending triumph over Detroit.

Counting the head-to-head losses to the 49ers and Seahawks, along with a possible four-tiebreaker grudge match with the Packers, the 11-3 Saints ostensibly must sweep their remaining road outings (@ Titans, @ Panthers) to secure a first-round postseason bye.

Otherwise, they’ll be strong bets for the No. 3 playoff seed, with the perk of hosting either the Packers, Vikings, Seahawks or 49ers on Wild Card Weekend.

PREDICTION: The NFL schedule-maker didn’t do the Saints many favors this season, and that’s especially true for Week 16, with the club encountering the formidable Titans on the road.

It’s a good matchup on paper … but not one that will result in victory.

After that, the Saints take down the Panthers in Week 17 to clinch the No. 3 seed.

FOX Sports and the NFL are hyping up Sunday’s Cowboys-Eagles clash as a winner-take-all scenario for both clubs, but that’s not necessarily the case.

With Dallas possessing a better division mark right now (4-0), Philadelphia (7-7 overall, 3-1 division) must sweep its remaining outings with the Cowboys (7-7 overall) and Giants (road) to claim the NFC East crown.

The upside to that: This unrelenting pressure to win will hopefully mean a 9-7 division champion … as opposed to a sad-sack 8-8 team hosting a 12-4 club on Wild Card Weekend.

PREDICTION: The Eagles have been erratic all season, but we still like their chances of finishing strong and taking the division title that no one seemingly wanted a month ago.

We’re somewhat skeptical of Seattle’s chances for capturing the NFC West title, even though the Seahawks own the head-to-head tiebreaker over the Niners … and will host the all-important rematch in Week 17.

The reason for such weariness:

a) Ten of Seattle’s 11 victories entailed a final spread of eight points or less.

b) The Seahawks rank 21st in scoring defense, yielding an average of 24.6 points per outing.

d) Russell Wilson might be a first-wave MVP candidate (3,708 yards passing, 31 total TDs, 5 INTs), but he likely can’t do it alone in December. The Seattle defense has recorded just four sacks over the last five weeks (second-worst rate in the NFL).

PREDICTION: BATSBY Sports has the Seahawks beating the Cardinals at home in Week 16 … but falling to the Niners for Week 17.

The Vikings might possess the lowest playoff seed in this hypothetical, but let’s also congratulate ’em on the following:

Since 1990, when the NFL added a second wild card for the NFC and AFC, neither conference has ever produced a 12-4 team for the No. 6 slot.

In other words, Minnesota picked the wrong year to post only a .750 winning mark … and fall to Seattle in a high-stakes Monday Night Football clash in early December (wild-card tiebreaker).

PREDICTION: The Vikings finish the regular season on a high note, knocking off the Packers and Bears at home; but the end result remains the lower wild-card seed.

And with that, a trip to New Orleans for Wild Card Weekend.